HILO/KAILUA-KONA, Hawaii – Hawaii Island joined the worldwide March Against Monsanto on Saturday, on both sides of Hawaii’s “Big Island”. “Over 250,000 people are expected to attend solidarity actions worldwide,” stated an email circulated to media by GMO Free Hawaii supporters on Friday, “including over 400 global marches planned to occur in 40 countries, including […]

HILO/KAILUA-KONA, Hawaii – Hawaii Island joined the worldwide March Against Monsanto on Saturday, on both sides of Hawaii’s “Big Island”.

“Over 250,000 people are expected to attend solidarity actions worldwide,” stated an email circulated to media by GMO Free Hawaii supporters on Friday, “including over 400 global marches planned to occur in 40 countries, including all 50 states in the United States. Everyone is invited to join in this peaceful protest and stand up for food sovereignty. This is a family friendly event, so everyone is encouraged to bring their entire ohana, friends, signs, flags and wear RED in solidarity.”

The people are taking to the streets against Monsanto – the powerful, multinational agricultural biotechnology corporation – for various reasons. Many are concerned about possible health effects related to genetically modified foods. According to organizers: “They point to research studies that have shown that Monsanto’s genetically modified foods can lead to serious health conditions such as the development of cancer tumors, infertility and birth defects. For example, the American Academy of Environmental Medicine recommends doctors prescribe non-GMO diets to patients citing organ damage, gastrointestinal and immune disorders, and other ill effects.”

Organizers are also concerned about Monsanto’s ownership of seeds. “Monsanto’s GMO seeds cannot be saved to be replanted,” they content in the email, “and GMO plants require consistent quantities of expensive, purchased pesticides to grow. Organizers support repealing the “Monsanto Protection Act” which bans courts from halting the sale of Monsanto’s genetically-modified seeds among other things.”

Tami Monroe Canal, reported to be the lead organizer of the global March against Monsanto, says she was inspired to start the movement to protect her two daughters. “I feel Monsanto threatens their generation’s health, fertility and longevity,” she said in a media release. “I couldn’t sit by idly, waiting for someone else to do something.” 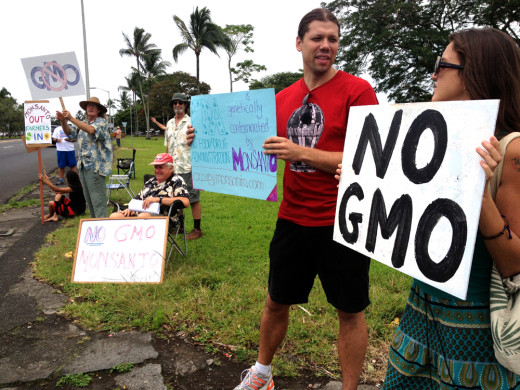 The day began in Hilo with a demonstration along the bayfront highway by the statue of King Kamehameha the Great. (See video below. We spoke to Puna farmer and activist, Jim Albertini.)

A big crowd gathered at the Old Airport Pavilion in Kona at 2:00 pm, where hundreds embarked on a march led by Pua Case and the Idle No More ohana down Ali’i Drive to the sacred Hulihe’e Palace and back. Then, an educational panel discussion was held. Panelists included Dr. Melisa Yee with Seeds of Truth; Dr. Hector Valenzuela professor of Organic Agriculture at CTAHR / UH Manoa, and others from around the island. Speakers talked about a variety of issues.

For Hawaii, the march coincides with an important vote this week at a Hawaii County Council committee. The local lawmakers are considering an outright ban on GMO plants on the island (excluding GMO papayas which have already been introduced and have the full support of the large papaya growers.) Bill 79 was introduced by Kohala councilwoman Margaret Wille, and decision making is planned for Wednesday, May 29th.

Wille was one of the panelists who spoke at the Kona event. (video is below)

Hawaii Island has fought GMO crops before. In 2008, the council voted to ban GMO coffee and GMO taro from being grown on the Big Island. The two crops are important, organic crops for the island.

This March, both sides of the Big Island held large rallies against GMO’s and called for the eviction of Monsanto from lands on the other Hawaiian islands. Video from that event is found below.