By David Corrigan, voice of Stephanie Salazar HILO, Hawaii – On Sunday, a sacred ceremony was held on the wahi pana of Palekai – by Radio Bay – along the shores of Keaukaha. Here, the keepers of an ancient knowledge prepared for a journey unlike any other in the history of Hawaii. The crew of the […] 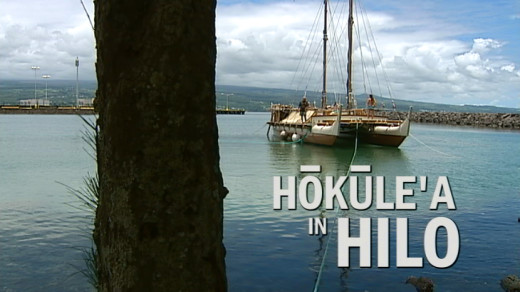 Five part series: We will be uploading all five parts and posting them to this page. Save this spot and check back every day!

HILO, Hawaii – On Sunday, a sacred ceremony was held on the wahi pana of Palekai – by Radio Bay – along the shores of Keaukaha. Here, the keepers of an ancient knowledge prepared for a journey unlike any other in the history of Hawaii.

The crew of the Hōkūleʻa, the iconic vessel of the Polynesian Voyaging Society, partook in ritual ‘awa drink before the start of Mālama Honua.

The worldwide voyage will stop at more than 60 ports in more than 20 countries, most with traditional systems of ocean voyaging. The sail plan – as Kim Kuulei Birnie explained – will bring Hōkūleʻa to parts of the world it has never been before.

After the ‘awa ceremony, with Hōkūleʻa moored in the bay, the Keaukaha Community and the Ohana Wa’a helped the voyagers host a celebration of the coming journey. The children of Ka ʻUmeke Kāʻeo honored the travelers with song. 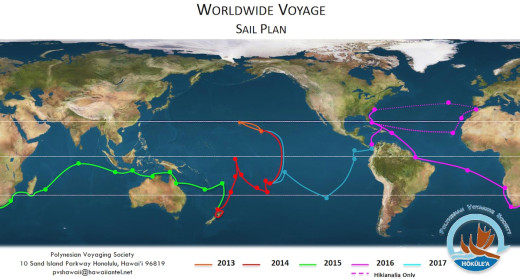 A closer look at the official sail plan for the Worldwide Voyage, courtesy the Polynesian Voyaging Society. Click on the map for a bigger view.

The voyage will take five years, although it will be another year of sailing around the Hawaiian Islands – the Mālama Hawaii leg of the voyage – before Hōkūleʻa and its companion vessel, Hikianalia, head off to Tahiti. After that, there will be a long visit to 20 ports in Aotearoa – or New Zealand – in late 2014 / early 2015.

Then its off to Fiji, Australia, Indonesia, and Madagascar… with plans to reach Cape Town, South Africa by January 2016.

Then it will cross the Atlantic to Brazil, before visiting the East Coast of the United States. Stops are planned in Florida, New York, and the Chesapeake Bay…

Hikianalia will go it alone back across the Atlantic for a visit to Portugal, Itlay and Gibraltar.

The two vessels will re-unite in Miami in January 2017 before hopefully cutting through the Panama Canal, then stopping in Coast Rica, the Galapagos, Rapa Nui, and then back to Tahiti.

Hokule’a and Hikianalia both plan to return to Hawaii in June 2017… arriving first in Hilo.

PART ONE: All aboard the Star of Gladness

We had the opportunity to board the Hōkūleʻa the day before Sunday’s big celebration.

Crew members kindly paddled us out, where we joined Tiffany Edwards Hunt of the Big Island Chronicle and blogger Damon Tucker on the legendary double hulled canoe.

Jenna Ishii and Michi Wong were barraged with questions about how the 14 crew members live on the 62 feet long and 20 feet wide vessel during the long voyage. They also showed us how they have to prepare food during the trip.

Of course, Hōkūleʻa is without the kind of comforts a modern sea vessel might have. After all, the whole point is to replicate traditional wayfinding – navigating the ocean using only the ancestral knowledge of star patterns, wave movement, and various other signs of nature – connecting modern Hawaii with its voyaging ancestors.

All this was explained at the ‘Imiloa Astronomy Center, where a large crowd attended a special talk on Friday evening. Nainoa Thompson was joined by his cousin, author and documentary filmmaker Sam Low.

The heart of Hilo has always been with the wayfinders. As recently as 2011, the same groups gathered by the bay to greet and guide seven voyaging canoes to shore.

What is it about this part of the Hawaiian Islands that is so inviting as a start or a finish to a long voyage?

PART FIVE: Navigating out of the doldrums