UPDATE: Wednesday at 1:28 p.m. The Department of Land and Natural Resources says it will keep Kekaha Kai State Park closed today because of the continued presence of sharks in the area. From the DLNR: A Hawaii Fire Department helicopter flyover this morning over the coast sighted eight reef sharks measuring about 5 to 6 […]

The Department of Land and Natural Resources says it will keep Kekaha Kai State Park closed today because of the continued presence of sharks in the area. 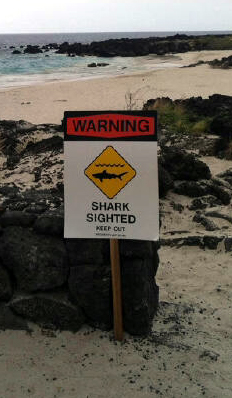 The Department of Land and Natural Resources says the victim was swimming in waters off of Mahaiula Beach when he was bit by a shark just before 1 p.m.

The Hawaii County Fire Department responded and transported him via medevac helicopter to Kona Community Hospital for treatment.

The helicopter overflight also revealed what appeared to be a large tiger shark in the water below, near the spot where the man was attacked.

Hawaii News Now obtained photos of the victim, and an interview with an eye witness to the attack.

Hawaii County Police described the incident in a media release:

The two bays will stay closed until at least noon Wednesday, following a flyover by Hawaii County Fire Department helicopter to assess offshore waters for any presence of sharks.

This marks the 4th high profile shark attack along the Kona coast in three years.

Earlier this year, a surfer was attacked in Kiholo Bay. Paul Santos survived his encounter with the estimated 15 to 16 foot tiger shark.

And earlier, in May of 2011: two seperate attacks in a span of just a few days at Holualoa Bay. There were no injuires, but the sharks left their mark.

The women who experienced the close calls shared their stories.