KEALAKEHE, Hawaii – The Department of Parks and Recreation presented a master plan for the proposed Kealakehe Regional Park during a public meeting on Tuesday evening at the West Hawai‘i Civic Center.

The new park will sit between the Kealakehe Police Station and the West Hawai‘i Civic Center, bordered by Queen Ka‘ahumanu and Ane Keohokālole highways.

“Reflecting input gathered from numerous stakeholders,” the county wrote in a media release, “the master plan proposes a soccer/football/rugby complex, a baseball/softball complex and a tennis complex. A covered play court suitable for indoor basketball and volleyball, along with a central plaza featuring an amphitheater, skate park and various other recreational facilities also are part of the park’s design.”

Plans and pictures can be found on the park planning website, www.kealakeheregionalpark.com.

A video that was shown to attendees has been uploaded to YouTube (above). The footage shows a computer generated fly-over of the conceptualized 190-acre park.

The planned park is on state property, but the parcel has been placed under Hawaii County control. The West Hawai‘i Parks and Athletic Corporation was established as the non-profit overseeing the planning process, which came about, in part, when a plan to develop recreational facilities at the Old Kona Airport was scrapped in favor of retaining open space along the beach. La’i’opua 2020 led the effort to establish the park at Kealakehe instead.

The land once seemed destined to be an 18-hole public golf course and effluent disposal area for the County sewage treatment plant. Those plans were never implemented. 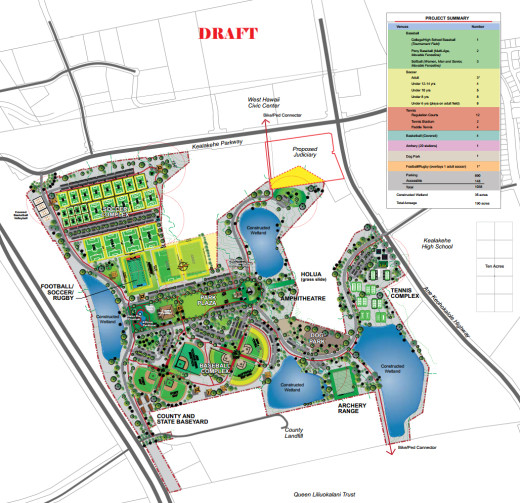