HAWAII VOLCANOES NATIONAL PARK, Hawaii – When Mount St. Helens erupted explosively in 1980, most people were unaware that the U.S. ranks as one of the top countries in the world in the number of geologically young, active volcanoes. An updated review of the Nation’s active volcanism from 1980 through the end of 2012, however, […] 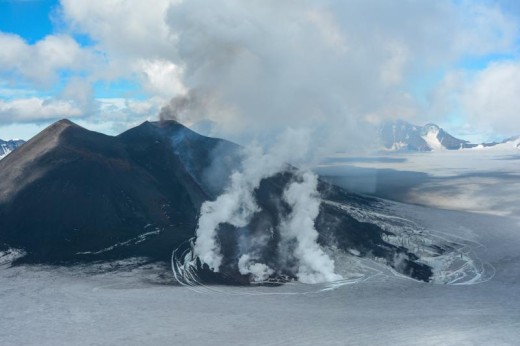 Veniaminof Volcano, Alaska, erupting lava from the top of a cone located in the western part of its 8 x 11 km- (5 x 7 mile) wide caldera on July 16, about a month after the eruption started. The lava is flowing down a narrow channel of the cone, beneath an approximately 60-m- (200 ft) thick cover of snow and ice in the caldera. The cone rises about 300 m (1,000 ft) above the surface of the ice. An enormous eruption about 3,700 years ago expelled an estimated 100 cubic kilometers (24 cubic miles) of magma—about 100 times the size of the 1980 eruption of Mount St. Helens—resulting in the collapse of the volcano to form the caldera. Veniaminof, which has sustained more than 20 eruptions since 1800, is one of Alaska’s most active volcanoes. Photograph by the Alaska Volcano Observatory, U.S. Geological Survey.

HAWAII VOLCANOES NATIONAL PARK, Hawaii – When Mount St. Helens erupted explosively in 1980, most people were unaware that the U.S. ranks as one of the top countries in the world in the number of geologically young, active volcanoes. An updated review of the Nation’s active volcanism from 1980 through the end of 2012, however, shows that 107 eruptions occurred at 32 volcanoes (most of which are located in Alaska), and at least 41 episodes of unrest were observed at 13 volcanoes.

So far in 2013, four new eruptions have occurred at volcanoes in Alaska (Cleveland, Pavlof, and Veniaminof) and the Commonwealth of Northern Marianas Islands (Pagan), and two eruptions are continuing in Hawai`i at Kilauea Volcano from Halema`uma`u Crater at the summit and the Pu`u `O`o vent 18 km (12 miles) to the east.

Also in 2013, various signs of persistent unrest continue at two of the largest volcanoes in the U.S., Yellowstone and Long Valley calderas in Wyoming and California, respectively.

The most voluminous lava-producing eruption since 1980 is the ongoing Kilauea eruption (1983-present), which is not showing signs of winding down.

Eruption warnings and regular information updates in the United States are the responsibility of the U.S. Geological Survey (USGS) through the Volcano Hazards Program(VHP) and its five volcano observatories, along with Federal, State, and University partners.

In the past 33 years, the capability of the USGS to issue warnings and updates has increased significantly for several key reasons: the astounding improvements in volcano-monitoring, computer, and information technology; a dramatically increased number of monitoring networks installed on volcanoes with the highest threat in the U.S., especially in Alaska; the experience and expertise gained by scientists in understanding volcanic processes and interpreting the early signs of potential volcanic activity; and the creation of coordinated communication and emergency-response plans for use during eruptions and escalating periods of unrest.

This unprecedented capability stems from significant long-term investment by the Federal government to reduce volcanic risk in the nation after the eruption of Mount St. Helens, when funding of volcano monitoring and research increased tenfold.

In 2005, the USGS characterized this expanded monitoring and warning capability as the U.S. National Volcano Warning System (NVEWS) and developed a framework for expanding the monitoring effort to include more volcanoes deemed a high threat to the nation but that are not sufficiently well-monitored to ensure detection of unrest and warnings well before any eruption might begin.

This framework spurred further investment in the NVEWS infrastructure in 2009 and 2010 through the American Recovery and Reinvestment Act (ARRA) in 2009 and 2010, when the USGS received $15.2 million for its Volcano Hazards Program. Today’s volcano monitoring and warning capability was significantly improved by ARRA, but––as widely reported in the media earlier this year––the effects of continuing sequestration make it difficult to maintain or improve the NVEWS.