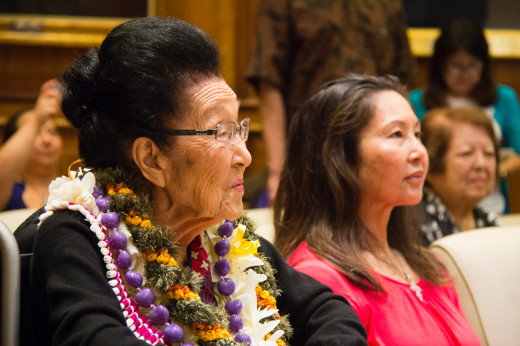 On April 10, 2013, Gov. Abercrombie signed House Bill 1258 (Act 8) into law, allowing PABEA to honor a non ex-officio member with the title of Lifetime Honorary Kupuna. The title includes all the rights and privileges of other PABEA members. Kanazawa was chosen as the first to receive the honor in recognition of her decades of achievement in advancing policies and programs that enhance the lives, safety and welfare of Hawaii’s elders and their caregivers across the state and nation.

“Shim is a living expression of what it means to live with Aloha,” Gov. Abercrombie said. “She has spent her life in service to others, especially as an advocate for youth and the aged. I am confident that she will continue to be a valuable contributor to the Policy Advisory Board for Elder Affairs and a tireless advocate for Hawaii’s kupuna.”

Born 1915 in Kamuela, Hawaii Island, Kanazawa was raised on Parker Ranch as the eldest of 11 siblings. She attended and graduated from Waimea Elementary School, Hilo Intermediate, Hilo High School, and later Chamberlain School of Retailing. After graduating from Hilo High School in 1934, Kanazawa worked as a school secretary at Kohala High and Elementary School, where she also taught a course in office training and filled in as vice principal. She remained there until August 1941, when she moved to Oahu and worked at the Vocational Education Division of the Department of Public Instruction.

After the attack on Pearl Harbor, her life was transformed dramatically. 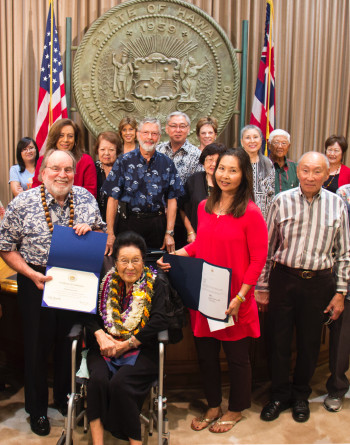 Gustav W. Olson, Queens Hospital administrator and Vice Consul of Sweden, hired Kanazawa as the administrative secretary to the Swedish Vice Council. She functioned as the liaison between the Japanese civilian population and the U.S. military. She inspected the living conditions of the Japanese prisoners of war, of the internees in the Hawaii camps, and she accompanied Japanese families on their trans-Pacific journey to internment camps in the continental United States. It is during this time that she came to be known as the “Florence Nightingale of Hawaii.”

Kanazawa has made it her life’s work to aid those in need of assistance and to lift the spirits of those she comes across. Since the late 1950s, Kanazawa has worked as an advocate for youth and for the aged. She was a driving force behind the foundation of the State of Hawaii Executive Office on Aging and, in 1989, founded the Project Dana (Dana means “selfless giving” in Sanskrit), an interfaith volunteer caregiver program based at the Moiliili Hongwanji Mission to provide support to frail, elderly and disabled residents. She was also appointed to the National Advisory Committee on Aging by President Jimmy Carter (as well as subsequently by Presidents Ronald Reagan and Bill Clinton).

In addition, Kanazawa has been a pioneer in numerous other leadership roles, including:

For more information and to find ongoing opportunities to celebrate and support older Americans, contact the Executive Office on Aging at (808) 586-0100, visit the Aging and Disability Resource Center online at www.hawaiiadrc.org to locate a local Area Agency on Aging, or call (808) 643-2372.