HILO, Hawaii – Things return to normal for Hawaii Island today, one day after Tropical Storm Flossie blows over. Hawaii County operations were halted on Monday in anticipation of a tropical storm that never really materialized. Flossie was downgraded to a tropical depression early Monday evening, as the storm weakened over Maui. Flossie threw forecasters […]

Hawaii County operations were halted on Monday in anticipation of a tropical storm that never really materialized. Flossie was downgraded to a tropical depression early Monday evening, as the storm weakened over Maui.

Flossie threw forecasters a few curves as she tracked over the islands. In the end, things were not nearly as bad as they could have been. There was some rain, some wind, and a few fallen trees.

There were road closures and detours in Puna. Power outages left thousands in the dark, as HELCO scrambled to restore service.

Overall, the impact of Tropical Storm Flossie was relatively moderate.

It was the anticipation of Flossie that created anguish the day before. The National Weather Service at one point had Flossie’s so called “cone of uncertainty” tracking directly Hawaii Island, going head to head with Mauna Kea.

Edna Anderson was not worried on Sunday. It was as beautiful a day as any you’ll see along Puhi Bay. With news of Flossie’s arrival in just a few hours, campers had a decision to make.

Many heeded the Tropical Storm Warning that had been posted, like Jack Furtado who was busy at Wailoa Small Boat Harbor.

Over the course of the day on Sunday, meteorologists were expecting Flossie to weaken before hitting the islands. The storm was moving into colder water, drier air, and wind shear… all factors that would limit Flossie’s strength. However, the storm did not appear to weaken as much as anticipated by 2 p.m. Sunday.

Government took precautions. State courthouses on the Big Island were closed for Monday.

Coast Guard Captain of the Port closed the ports of Hilo and Kawaihae to all traffic on midnight Sunday.

Residents and businesses across the island were braced for a wet and windy morning. Instead, Flossie made a dramatic turn.

According to the National Weather Service 5 a.m. discussion, “The center of Flossie was hidden by high clouds most of the night before … visual satellite imagery revealed an exposed low level circulation center farther north than expected. The track has been shifted north to reflect the re-located center.”

Mayor Kenoi, who was up all night with the Hawaii County Civil Defense personnel, was there to see the sudden change.

The Tropical Storm Warning remained in effect, and high surf was still a concern. Baron Sekiya, filming video for Na Leo o Hawaii TV, got a dramatic shot of waves crashing over the Hilo break wall.

In Kona, things looked a lot worse, judging by this footage captured by Visionary Video. 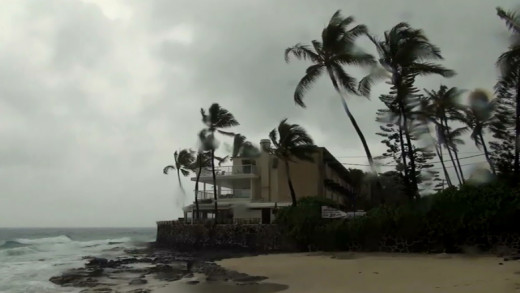 Kailua Village was a bit of a mess. Even as the storm conditions subsided for the rest of the island, civil defense officials said Kailua-Kona continued to experience strong winds and moderate rains. Many businesses took the time to pile a few sandbags outside to avoid flood damage.

In Waimea, there was some minor flooding, and a fair share of fallen branches on the roads.

Back in Hilo, evacuation shelters like the one at Aunty Sally’s Luau Hale were getting little use. 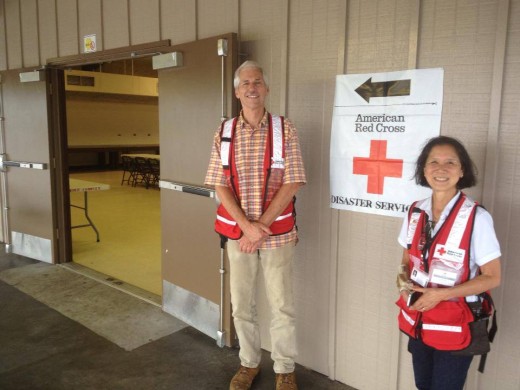 Shelter at Aunty Sally’s in Hilo: not busy on Monday

And by late afternoon, the weather event was done. Civil Defense issued one final alert to the people of Hawaii County.