KAILUA-KONA, Hawaii – Its that time of year again in Kona. Thousands are crowding Kailua Village for the annual Ironman World Championship. Big Island Video News has been covering the event for the past few years. We’ve filmed the official finish line action, as well as the behind-the-scenes along the Kohala Coast and Hawi, the […] 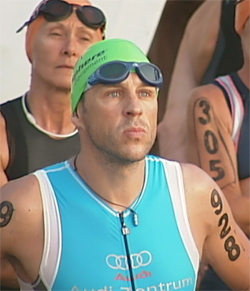 A triathlete prepares to enter the water before the start of the Ironman championship in 2008.

KAILUA-KONA, Hawaii – Its that time of year again in Kona. Thousands are crowding Kailua Village for the annual Ironman World Championship.

Big Island Video News has been covering the event for the past few years. We’ve filmed the official finish line action, as well as the behind-the-scenes along the Kohala Coast and Hawi, the official midpoint of the race.

Every year the names and the times change, but the course has stayed the same. Here is a special look at what we can expect from the world’s most famous endurance contest… from start to finish… and the people who play an important role, without a number on their chest.

Its a long day, and it starts well before the sun rises. As this video from 2008 shows, the triathletes begin to gather under a dark sky at the King Kamehameha Kona Beach Hotel, right next to the start of the race off Kailua Pier.

Coordinating the thousands of participants is no small feat. The triathletes are corralled by age and given the appropriate markings before heading out to the pier. Its an important process, if everyone is to be properly tracked during the race.

Out on the pier, athletes make sure their gear is in order one last time – and bid eachother good luck – before getting into the water… where the anticipation slowly builds as dawn approaches.

The race traditionally begins with cannon-fire. The last few years, Hawaii County Mayor Billy Kenoi has done the honors. The blast kicks off the first leg of the Ironman – a 2.4-mile swim out into Kailua Bay and back.

There is usually a lot of excitement around who is first out of the water on the return… but its just the start of a long and exhausting day. Rarely is the winner determined this early on. From there, the race can become chaotic, as the triathletes transition from the water to the bike.

Now, the second leg of the race begins… the 112 mile bike ride up the Queen Kaahumanu Highway, through the hot and windy lava fields of the Kohala Coast, up to the midpoint of the race… the little town of Hawi in North Kohala… which, as this 2009 video shows, can be a battlefield of fatigue.

Back down to Kailua Village, and the final transition… from bike to foot… many of the best will have already dropped out at this point. A small technological malfunction during the bike ride can sideline the best competitor. But the 26.2 mile marathon to finish the race is usually where the Ironman champion is determined.

Many fall victim to sheer exhaustion at this point. For most, the accomplishment of finishing the race represents the achievement of a life long dream. And every year, there can be only one Ironman World Champion.

Behind the scenes, an army of hard working volunteers keep the race running smooth… maintaining security, or manning the critical aid stations up and down the race route.

Kona offers more than just a scenic backdrop for the world championship… the town pulls together to offer enthusiastic manpower, ready to support the event with their sweat equity. Certainly, 2013 will be no different when it comes to the hard work of the world’s best triathletes, AND Kona’s Kokua crew.