HONOLULU – The U.S. Fish and Wildlife Service has determined endangered species status for 15 species on the island of Hawaii. Thirteen plants, a picture-wing fly and an ultra-rare “anchialine” pool shrimp have gained final protection under the Endangeredr Species Act of 1973. The notice is scheduled to be published in the Federal Register on […] 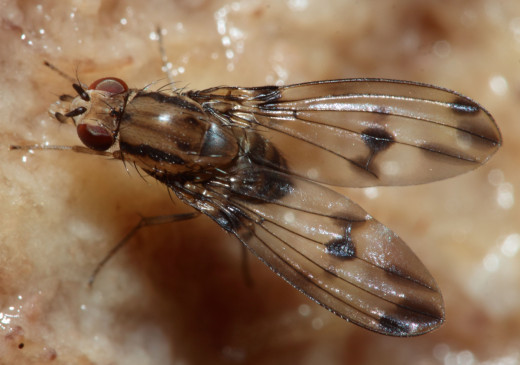 HONOLULU – The U.S. Fish and Wildlife Service has determined endangered species status for 15 species on the island of Hawaii.

Thirteen plants, a picture-wing fly and an ultra-rare “anchialine” pool shrimp have gained final protection under the Endangeredr Species Act of 1973. The notice is scheduled to be published in the Federal Register on October 29.

The protections are the result of a 2011 agreement between the feds and the Center for Biological Diversity to speed protection decisions for 757 imperiled plants and animals from across the country.

“Part of Hawaii’s beauty is the amazing diversity of life unique to the Aloha state. Endangered Species Act protection will keep these magnificent plants and animals safe for generations to come,” said Tierra Curry, a conservation biologist at the Center. “The Fish and Wildlife Service has made excellent progress in addressing the long backlog of plants and animals facing extinction. Now Congress needs to designate sufficient funding for recovery to make sure these endangered species get what they need to thrive.”

According to the Center for Biological Diversity, “picture-wing fly was discovered in 1968. Adults are less than a quarter-inch in length and have brownish-yellow bodies, yellow legs and shiny, clear wings with prominent brown spots. They are dependent on one specific host plant to reproduce, laying their eggs only on decaying stems of Charpentiera plants. Adults live for one to two months. Historically there were five known sites for the fly, but today it survives in only two places — the Manuka Natural Area Reserve and the Olaa Forest Reserve. The fly is threatened by forces that harm its host plant, including browsing by goats, pigs and cattle; invasive plants; fire; drought; and hurricanes. It is also threatened by predation from non-native wasps.”

The Center for Biological Diversity again provides an excellent summary: “The anchialine pool shrimp lives only on the Big Island and nowhere else in the world; only five individuals of the species have ever been seen. Anchialine pools are land-locked bodies of water that have underground connections to the sea and show tidal fluctuations in water level. The pool shrimp is threatened by degraded water quality due to siltation, which harms the algae, bacteria and small invertebrates it feeds on. Its body is two inches long; it has two-inch antennae and eyestalks, but no eyes. One of the most primitive shrimp species in the world, this intriguing animal can only swim forward, whereas most shrimp can also swim backward.”

Once again, Manuka plays an important sustaining role. According to the description found in the final rule, “, Vetericaris chaceorum has only been documented from two locations: Lua o Palahemo, which is a submerged lava tube located on the southernmost point of Hawaii Island in an area known as Ka Lae (South Point) (Kensley and Williams 1986, pp. 417–418; Brock 2004, p. 2; HBMP 2010), and at Manuka, where only recently V. chaceorum was discovered in a series of pristine shallow anchialine pool complexes within and adjacent to the NAR, approximately 15 mi (25 km) northwest of Lua o Palahemo (Sakihara 2012, in litt.). The Service has concluded that the lack of detection of this species in the several hundred anchialine pools surveyed on the island of Hawaii since the 1970s suggests this species has a very limited range…”

The shrimp are really hard to count, scientists say, because of “the ability of hypogeal shrimp species to inhabit the interstitial and crevicular spaces in the water table bedrock surrounding anchialine pools.”

There are also 13 plants being pout on the Endangered Species list. This information is from the descriptions in the final rule document.

Bidens micrantha ssp. ctenophylla (kookoolau), a perennial herb in the sunflower family (Asteraceae). Currently, this subspecies is restricted to an area of less than 10 square miles on the leeward slopes of Hualalai volcano, in the lowland dry ecosystem in 6 occurrences totaling fewer than 1,000 individuals. The largest occurrence is found off Hina Lani Road with over 475 individuals widely dispersed throughout the area. Another occurrence at Kealakehe was reported to have been abundant and common in 1992, but by 2010 had declined to low numbers. 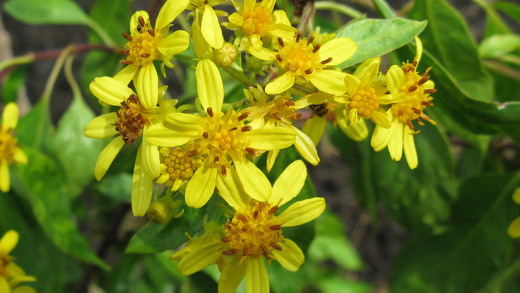 Cyanea marksii (haha), a shrub in the bellflower family (Campanulaceae). Currently, there are 27 individuals distributed among 3 occurrences in south Kona, in the lowland wet and montane wet ecosystems There is an adult and 20 to 30 juveniles (each approximately 1 inch) in a lava tube in the Kona unit of the Hakalau National Wildlife Refuge (NWR), 3 adult individuals and 6 seedlings in the Kaohe pit crater in the South Kona FR, and 25 individuals on private land in south Kona. Fruit has been collected from the individuals on private land, and 11 plants have been successfully propagated at the Volcano Rare Plant Facility. 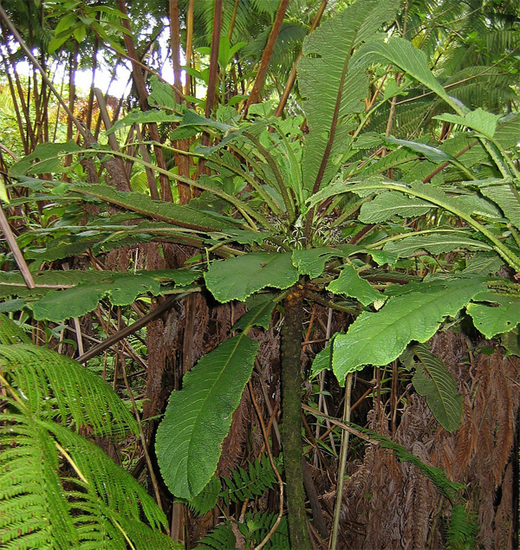 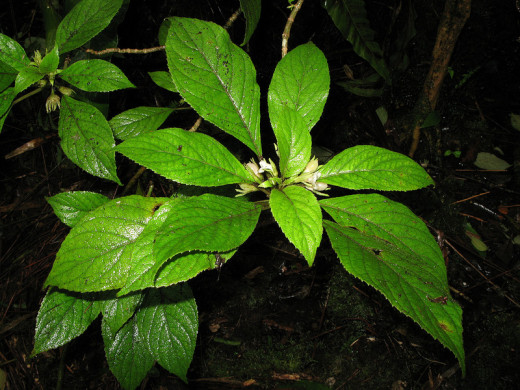 Cyrtandra wagneri (haiwale), a shrub or small tree in the African violet family (Gesneriaceae). There were 2 known occurrences totaling fewer than 175 individuals in the Laupahoehoe NAR: one occurrence (totaling 150 individuals – 50 adults and 100 juveniles) along the steep banks of the Kilau Stream and a second occurrence (with approximately 10 sterile individuals) along the slopes of the Kaiwilahilahi stream banks. 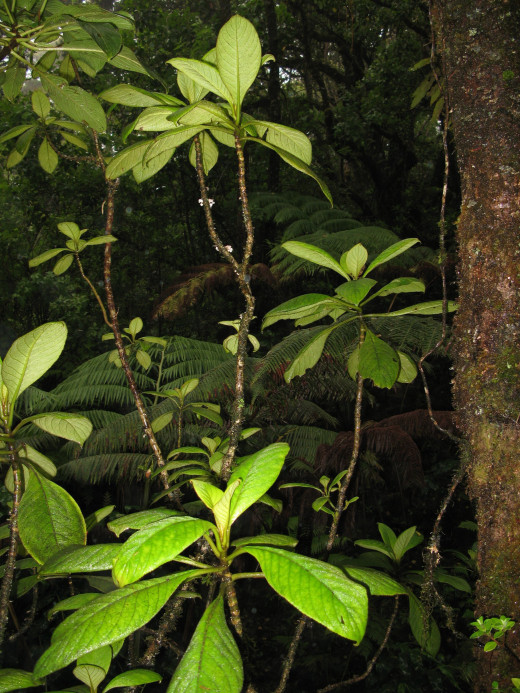 Phyllostegia floribunda (NCN), a perennial herb in the mint family (Lamiaceae). Currently, there are 12 known occurrences of P. floribunda totaling fewer than 100 individuals, some are found in surprising areas… like the volcanic Kamoamoa (1 individual) and near Napau Crater, both in the National park, as well as 10 to 50 individuals growing behind the Volcano solid waste transfer station, among a number of others spots. 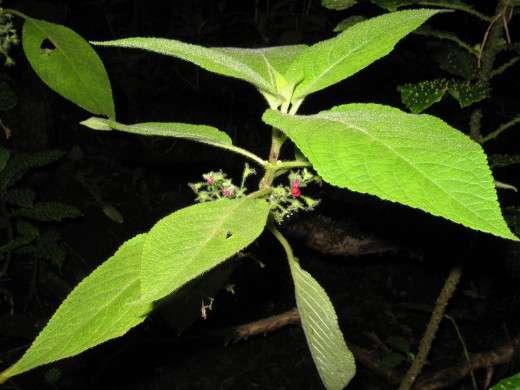 Platydesma remyi (NCN), a shrub or shrubby tree in the rue family (Rutaceae). Currently, P. remyi is known from 8 occurrences totaling fewer than 40 individuals, all of which are found in the Laupahoehoe NAR

Pritchardia lanigera (loulu), a medium-sized tree in the palm family (Arecaceae), Currently, P. lanigera is known from 8 occurrences totaling fewer than 230 individuals scattered along the windward side of the Kohala Mountains, Kau FR, and TNC Kau Preserve, in the lowland mesic, lowland wet, montane wet, and wet cliff ecosystems. According to field biologists, pollination rates appear to be low for this species, and the absence of seedlings and juveniles at known locations suggests that regeneration is not occurring, which they believe to be caused, in part, by beetle, rat, and pig predation on the fruits, seeds, and seedlings. 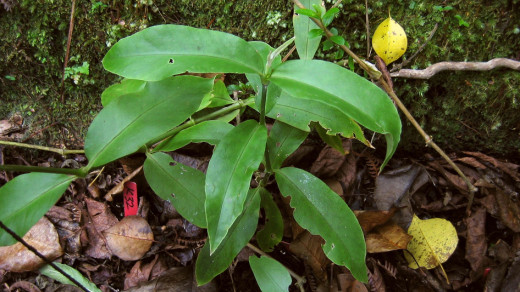 Schiedea hawaiiensis (NCN), a perennial herb or subshrub in the pink family (Caryophyllaceae). Currently, S. hawaiiensis is known from 25 to 40 individuals on the U.S. Army’s Pohakuloa Training Area (PTA) in the montane dry ecosystem, in the saddle area between Moana Loa and Mauna Kea. In addition, there are over 150 individuals outplanted at PTA (Kipuka Alala and Kalawamauna), Puu Huluhulu, Puu Waawaa, and Kipuka Oweowe.

Stenogyne cranwelliae (NCN), a vine in the mint family (Lamiaceae). Currently, there are 6 occurrences of S. cranwelliae totaling fewer than 160 individuals in the Kohala Mountains, in the montane wet and wet cliff ecosystems: around the border between the Puu O Umi NAR and Kohala FR, near streams 22 and bogs

The U.S. Fish and Wildlife Service is proposing 18,766 acres of “critical habitat” to protect the kookoolau, as well as two previously listed plants, the wahinenohokula and the uhiuhi, that occur in the same lowland dry areas.