HILO, Hawaii – A grand, new building for the University of Hawaii-Hilo’s Ka Haka `Ula O Ke`elikōlani College of Hawaiian Language was celebrated on Saturday. Located on Nowelo Street just below the ‘Imiloa Astronomy Center, the $21 million complex consolidates the College’s programs and operations formerly scattered throughout the campus. Its also an ambitious step […]

Located on Nowelo Street just below the ‘Imiloa Astronomy Center, the $21 million complex consolidates the College’s programs and operations formerly scattered throughout the campus. Its also an ambitious step towards perpetuating the indigenous language of the islands, which was once thought destined for extinction. 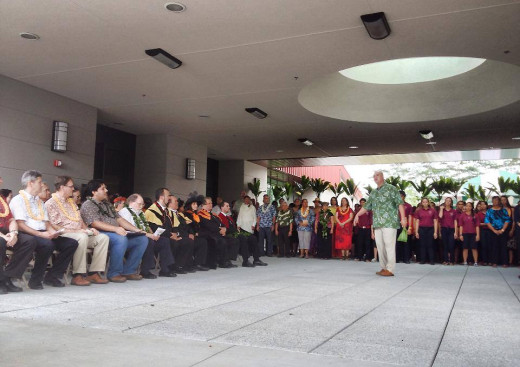 The ceremony begins in the piko of Hale’olelo

Hawaii’s cultural tradition was on display at the bilingual blessing. The events began with a formal `Oki Piko ceremony, which symbolized the cutting of the umbilical cord to separate the new building from its birth mother to begin its life. Representatives of the college consortium of `Aha Pūnana Leo, `Imiloa Astronomy Center, and Nāwahīokalani`ōpu`u School offered tributes in Hawaiian and presented their heahea, or calls of welcome. Mele oli by college students, teachers and faculty preceded the entry into the new building – named Hale’olelo.

Once inside, shoes were left at the door to the main hall – where representatives from the University and elected officials spoke before the audience. 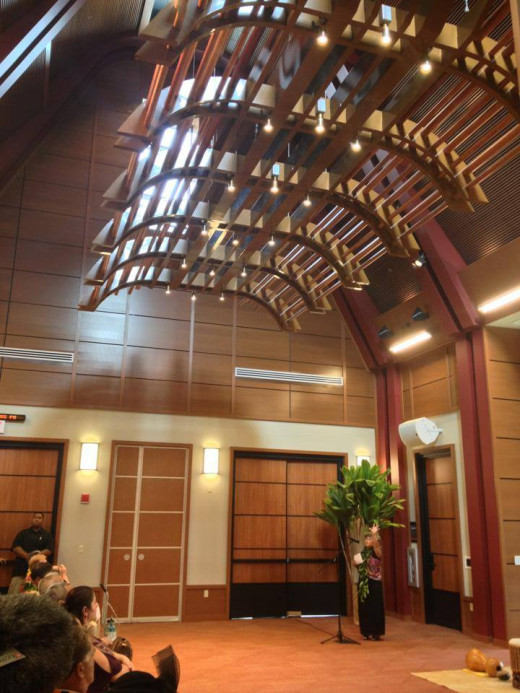 Beneath the roof (inspired by the pili grass thatched home of Princess Ruth Ke`elikōlani), inside the new College of Hawaiian Language building

“The faculty and staff of Ka Haka `Ula O Ke`elikōlani has worked long and hard to establish the College as a leader in indigenous language and cultural revitalization,” said Chancellor Don Straney. “At long last, they have a permanent home in a facility that is worthy of the quality programs that have earned them international recognition.”

Senator Clayton Hee was one of the keynote speakers. Hee recounted the rebirth of the Hawaiian language and spoke of the need to create a “university within a university” for Hawaiian language. Representing the mayor’s office, Ilihia Gionson delivered a proclamation – he said one of only two that he knows of written in Hawaiian. Gionson himself is fluent in ʻŌlelo Hawaiʻi.

There was also hula, of course. Two performances honored Princess Ruth Luka Keanolani Kauanahoahoa Keʻelikōlani, the college namesake. A Hula Pahu emphasized the sanctity and power of Ke’elikolani’s royal lineage, while a Hula ʻŌlapa identified the former governor of Hawaii Island with the ohia lehua forest of Haili and the Pu’ulena breeze that bears the sweet fragrance of lush plant growth. The hula was directed by Dr. Kalena Silva, who blessed the land the building now sits on almost three years ago as director of the college. Others who were at that event in February 2011 were also in attendance on Saturday. It was the culmination of years of work for many of these dedicated practitioners of the Hawaiian language. 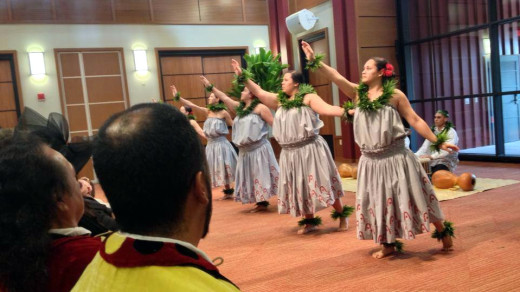 “It’s been a long time coming, but the wait has been worth it,” noted Keiki Kawai`ae`a, the current director of Ka Haka `Ula O Ke`elikōlani “This facility addresses many of our growing pains, and will enable expansion of our graduate and undergraduate programs in increasingly impactful ways for our State. We want to thank everyone throughout the community who supported this initiative and made it a reality.” 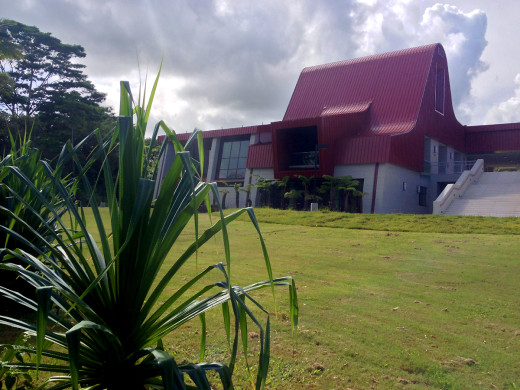 Hale’olelo as seen from the front yard

The true star on Saturday was the building itself. The 36,760 square foot, two story structure is already considered a cultural and architectural landmark in Hilo. Hale’olelo was designed by WCIT Architects of Honolulu, led by Rob Iopa, a graduate of Waiākea High School. Like many things in Hawaiian culture its appearance harmonizes place and history. It features a Performing Arts Auditorium that can be sub-divided. 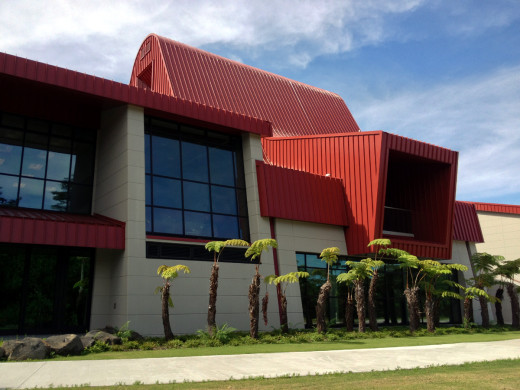 The roof was inspired by the pili grass thatched home of Princess Ruth Ke`elikōlani, the original Hale`ōlelo located on the grounds of Hulihe`e Palace in Kailua-Kona. Special-use rooms include a library, curriculum and media resource room, tutorial, archive and telecom conference rooms, a computer lab, student and faculty meeting rooms, and 30 offices. The structure was built by Jacobson Construction of Salt Lake City, Utah. 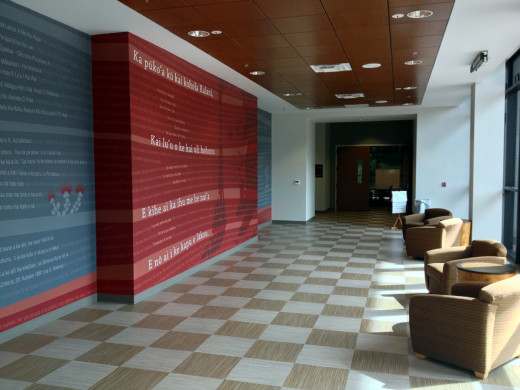 Hale’olelo is already set to be front and center on the international stage when it hosts the 2014 Stabilizing Indigenous Languages Symposium in just a few days.

Information and video for this report was contributed in part by the University of Hawaii.