POHAKULOA, Hawaii – Military drones could be on the way to Hawaii. A draft Environmental Assessment on the potential relocation of the US Navy’s Unmanned Aerial Vehicle Squadron to Hawaii is up for review. The UAS’s and about 480 personnel and dependents would be relocated from Twentynine Palms, California to Marine Corps Base Hawaii at […]

POHAKULOA, Hawaii – Military drones could be on the way to Hawaii.

A draft Environmental Assessment on the potential relocation of the US Navy’s Unmanned Aerial Vehicle Squadron to Hawaii is up for review.

The UAS’s and about 480 personnel and dependents would be relocated from Twentynine Palms, California to Marine Corps Base Hawaii at Kane‘ohe Bay. UAS training would then be conducted over existing Hawaii military training airspace. That includes Pohakuloa Training Area.

UAS are not new to Hawaii… Marine VMU squadrons have deployed the RQ-7B system to Hawai‘i in support of training exercises at PTA with the most recent deployment in January 2011. 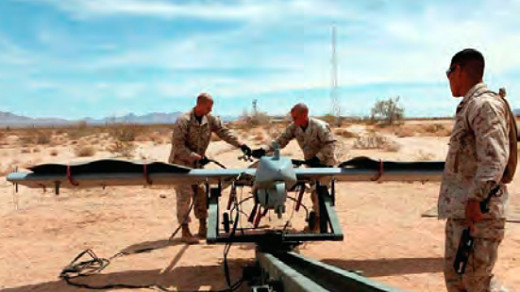 And the military is also considering the option of relocating the VMU-3 to Pohakuloa instead of Kane’ohe. However, the PTA alternative fails to meet 3 of the four criterion for the relocation.

The following is from the draft EA:

An Unmanned Aircraft System (UAS) is composed of one or more unmanned aircraft, controlled from the ground, and a variety of ground-support and communication equipment that supports single or multiple-site flight operations. UAS are found in a variety of shapes and sizes, and serve diverse purposes.

The USMC has utilized UAS since establishing its first UAS unit in 1984(2). The UAS increases the effectiveness of the air-ground team by extending the team’s influence over time and space on the battlefield. The persistence and reach of current systems are key characteristics that provide improved aerial reconnaissance and command–and-control capability exceeding that of manned aviation assets.

VMU squadrons are organized within a Marine Air Control Group (MACG) under a Marine Aircraft Wing (MAW), which is the Aviation Combat Element (ACE) component of a Marine Expeditionary Force (MEF). There are four MEFs within the USMC: I MEF is headquartered at MCB Camp Pendleton, California; II MEF is headquartered at MCB Camp Lejeune, North Carolina; III MEF is headquartered at MCB Camp Butler, Okinawa (supported by MCB Hawaii); and IV MEF is a Marine Corps Reserve MEF, headquartered in New Orleans, Louisiana. Currently, there are four VMU squadrons within the USMC, with VMU-1 and VMU-3 assigned to I MEF, VMU-2 assigned to II MEF, and the newest-VMU 4-assigned to IV MEF. The existing VMU-3, created in 2008, is currently assigned to MACG-38/3D MAW, located at Marine Corps Air Ground Combat Center (MCAGCC), Twentynine Palms, California. The USMC’s decision to add UAS capability to all of its MEFs, per the USMC Fiscal Year (FY) 2012 and 2013 Aviation Plans (USMC 2011, 2012), led to the proposal to relocate VMU-3 to the Pacific in support of III MEF. Accordingly, the Proposed Action would balance Marine Corps VMU apportionment across all the MEFs and would project Marine UAS capability into the Pacific Area of Responsibility (AOR).

While III MEF is headquartered on the island of Okinawa, the USMC presence and future force lay-down posture in Japan is continuing to evolve. The discussions regarding reductions in the USMC presence on Okinawa that led to agreements between the governments of the U.S. and Japan several years ago did not include an agreement to relocate USMC VMU units to Okinawa or to mainland Japan. Additionally, the Marine Corps is not authorized to operate, deploy, or base UAS in Japan. Accordingly, the Proposed Action is to relocate VMU-3 to Hawai‘i, rather than to mainland Japan or Okinawa.

1.3 PURPOSE OF AND NEED FOR THE PROPOSED ACTION
The purpose of the Proposed Action is to address the ACE deficiency in Hawai‘i by adding a UAS squadron under the ACE, thereby achieving a balance in the USMC’s capabilities in the Pacific and ensuring that Marine forces are sufficiently manned, trained, and equipped to meet any crisis or conflict. The Proposed Action would meet the need by addressing this deficiency.

The need for the Proposed Action is to ensure that the III MEF operational commander is supported by a balanced, geographically collocated Marine Air Ground Task Force (MAGTF) in Hawai‘i, to carry out legally-mandated responsibilities3 32 and maintain the highest state of readiness. Currently, III MEF is the only MEF in the USMC that lacks Group 3 UAS (Section 1.3.1) aerial reconnaissance capability. The Proposed Action enhances III MEF’s ability to sufficiently man, train, and equip Marines to meet any future crisis or conflict. Additionally, the Proposed Action would allow III MEF units based in Hawai‘i to more completely train as they fight, as a single unit combining the four elements of a MAGTF: Command Element (CE), Ground Combat Element (GCE), ACE, and Logistics Combat Element (LCE). The Proposed Action would allow a Marine UAS squadron to enhance this training and readiness by completing a role necessary to support the six functions of Marine aviation (assault support, anti-aircraft warfare, offensive air support, electronic warfare, control of aircraft and missiles, and aerial reconnaissance) that the ACE brings to the MAGTF. Collocating these capabilities in Hawai‘i would allow frequent, integrated, and cost-effective training to maximize operational effectiveness of III MEF and its state of readiness to meet any future crisis or conflict.

MCB Hawaii Kaneohe Bay serves to support overseas contingency operations and provide the MAGTF, tenant, and joint operations and training with adequate and unencumbered maneuver space and live-fire ranges. Relocation of VMU-3 to MCB Hawaii Kaneohe Bay would ensure that all ACE components and equipment are in place for troop training in Hawai‘i for the foreseeable future, so that the MAGTF could “train as we fight.”

The proposal to relocate VMU-3 to Hawai‘i involves only the Group 3 UAS: the RQ-7B and RQ-21A. The “Predator” for example, is a Group 4 UAS. 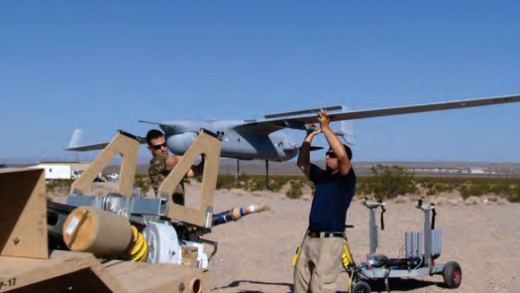 The option to relocate VMU-3 to Pohakuloa is considered “Alternative F” out of 6 alternatives.

Criterion 1, Accessibility to Airfields and Seaports Supporting Global Deployment – PTA does not satisfy selection Criterion 1 since it is not in close proximity via ground transportation to the three DoD aviation installations in Hawai‘i that support global deployment, nor does it have immediate access to a DoD-controlled deep harbor. Kawaihae Harbor on the west side of the island of Hawai‘i and the closest harbor to PTA, is not DoD controlled, nor does it typically support the types of ships used for global deployment. Such deployment would first have to involve transport of VMU-3 personnel and equipment to O‘ahu via aircraft and/or small ship.

Criterion 3, Facility Capacity – PTA is strictly an isolated training area. There is no permanent enlisted, officer, or dependent housing located at or near PTA, nor is there the existing basic infrastructure, such as a water supply (water is trucked to PTA in tankers) to allow development to accommodate the personnel or the operational space requirements for VMU-3 permanent basing. This alternative does not fulfill the minimum objectives of selection Criterion 3, Facility
Capacity.

Criterion 4, Access to Training Airspace – Under this alternative VMU-3 would have direct access to R-3103, an FAA-designated SUA above PTA, for regular UAS training operations at PTA, as well as for the less frequent training occurring there. This alternative fulfills the minimum objectives of selection Criterion 4. 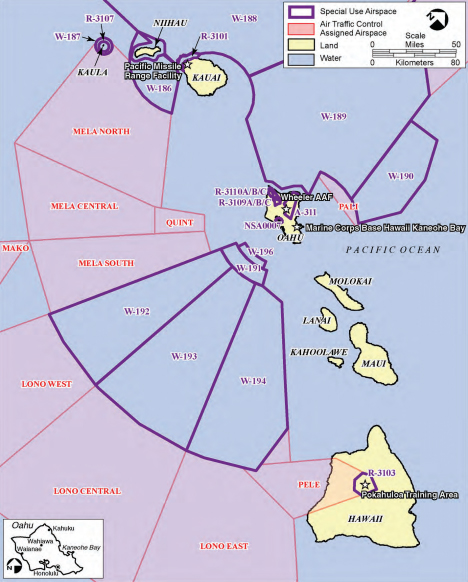 from Figure 24-10 of the draft EA, showing special use airspace in Hawaii

Proposed training at PTA on the island of Hawaii is anticipated to occur up to four times per year for three weeks at a time, for a total of up to 12 weeks per year.

Meanwhile, The Federal Aviation Administration (FAA) has announced the selection of six institutions to test the unmanned aircraft systems across several states in the US, including the State of Hawaii.

The University of Alaska was amongst the list of institutions elected by the FAA, and will test UAS in seven climatic zones with test sites range locations in Hawaii and Oregon.