Gov. Neil Abercrombie held a press conference Monday to announce the public release of the 2013 Comprehensive Annual Financial Report (CAFR) of the State of Hawaii. The report measures the state’s overall fiscal health.

The governor was joined by Comptroller Dean Seki and Finance Director Kalbert Young.

The State of Hawaii’s Comprehensive Annual Financial Report (CAFR) for the fiscal year ending June 30, 2013, has been completed and shows Hawaii’s asset growth has outpaced liability growth for the first time in seven years.

“The report measures the state’s net worth and overall fiscal health, which clearly shows strong positive fiscal growth over fiscal year 2012,” Gov. Neil Abercrombie said. “Our improving trajectory is a reflection of positive trends in our local economy and responsible management of fiscal affairs, which now includes recognized improvements in meeting our obligations for timely reporting.”

The state Department of Accounting and General Services (DAGS) in coordination with the Department of Budget and Finance and the Office of the Legislative Auditor completed the CAFR on Jan. 27, 2014. The report shows the State of Hawaii’s net position (assets less liabilities) for primary governmental activities increased for the first time since 2006 by $307.1 million, from $4.5 billion to $4.8 billion. This represents an increase of 6.8 percent over 2012. Assets increased by $1.1 billion, which outpaced an increase in liabilities of $807 million. The growth in assets is attributable to accelerating growth in revenues and slower-paced growth in operating expenditures.

In addition, for the first time in more than five years, the state received the Award of Achievement of Excellence in Financial Reporting from the Government Finance Officers Association for its 2012 CAFR. The award is given to governments for publishing financial reports that are clear, accurate, and delivered in a timely manner. Under the Abercrombie Administration, DAGS along with the Department of Budget and Finance have worked with the Office of the Legislative Auditor and an external auditor to address deficiencies in the timely production of previous CAFRs.

“The CAFR represents a coordinated and truly collaborative effort of all state departments with the Legislative Auditor and external auditor,” said DAGS Comptroller Dean Seki. “For each of the last three years, the CAFR has been delivered in a more timely manner, compared to the state’s delivery prior, and will serve as a helpful guide for anyone who has interest in the financial operations of the state.”

State Finance Director Kalbert Young commended: “Investors and credit agencies expect year-end financial reports to be available as soon as possible after the closing of the fiscal year so that the information is not outdated. We believe the state can continue to improve delivery of future reports.”

The CAFR also identified an encouraging decrease in capital projects fund standing balances from $281 million to $149 million. This reflects an increase in capital improvement project activity as more funds were deployed with improved efficiency into the economy through construction projects.

Addressing Other Post-Employment Benefits (OPEB) liabilities, Young added: “The report illustrates the importance of pre-paying annual required contribution for OPEB liabilities, as Gov. Abercrombie has been advocating over the last three years. The successful passage of Act 268 in 2013 and our intending Annual Required Contribution (ARC) contribution of $100 million in fiscal year 2014 should start to slow and then reverse the increase on the balance sheet and further improve our asset ratio.” 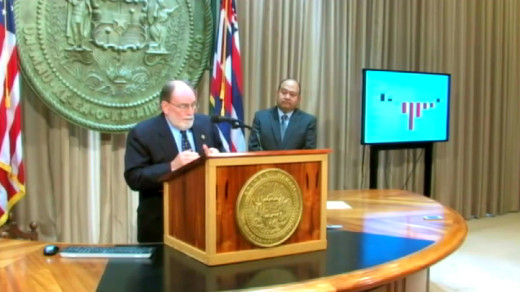