HILO, Hawaii: The Hawaiʻi Police Department’s 81st Recruit Class was recognized on Friday, during a ceremony at the Hilo Hawaiian Hotel. The recruits just completed six months of intensive training. 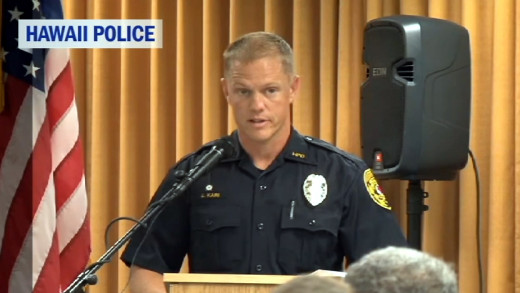 Speaking before an extended police department family, Class President John G. Kari recalled the evolution of the class, which started with 30 individuals from all walks of life who evolved into a cohesive unit of 22. Kari also explained the class motto, which is “Pūpūkahi I Holomua,” which means “Unite to Move Forward.”

The Police Department filmed and distributed video of the event, and also summarized the speakers at the event:

In recognition of Valentine’s Day, Police Chaplain Renee Godoy advised the recruits to “guard your heart” and Police Commission Chair John Bertsch talked about love and passion for the job. “Love means that we love what we do,” Bertsch said. “Passion means that we are passionate about what we do.”

Mayor Billy Kenoi congratulated the recruits for “having the courage to dream and the determination to make those dreams come true.” He told them that in addition to their commitment to their job, they should take care of themselves and appreciate their families. “The most important thing is not the job, it’s your family,” he said. “Always go home and hug them and tell them, ‘Thank you.’”

County Council Chairman J Yoshimoto told the recruits that the Police Department has the support of the council. “You have our gratitude and appreciation,” he said.

The keynote speaker was Dr. Christian Kimo Alameda, statewide director of the Department of Health’s Office of Health Equity, who provides “aloha training” to members of the police department. He stressed the importance of making positive choices. “I wish you guys the best,” he said. “It’s a tough world out there.”Hawaii Co. Police media release, Feb. 14, 2014

The recruits will now undergo four months of on-the-job field training with veteran police officers before they are qualified to work alone.