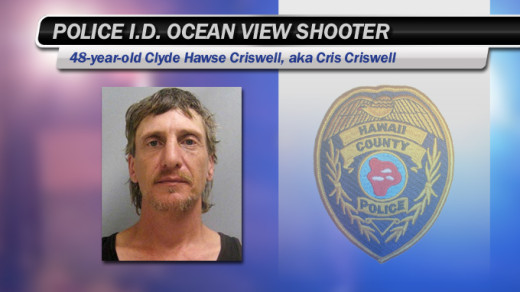 Police say 48-year-old Clyde Hawse Criswell, also known as Cris Criswell, of Ocean View shot a man inside a Tiki Lane property on March 12 before he turned the gun on himself, taking his own life.

From the police media release:

Shortly after 7 p.m. on March 12, Kaʻū patrol officers responded to a report of a shooting at a property on Tiki Lane at the intersection of Luau Drive.

Police investigation determined that two men, who live in separate dwellings on the property, got into an argument. The victim, a 37-year-old man, entered his house and Criswell followed him and shot him. He then stepped out of the house and fatally shot himself.

The victim was flown to Kona Community Hospital and then to The Queen’s Medical Center on Oahu, where he remains in critical but stable condition.

Detectives from the Area II Criminal investigations section are continuing the investigation as an attempted murder and suicide.Hawaii County Police media release on March 17, 2014