HONOLULU, Hawaii – The Senate Committee on Ways and Means on Thursday passed their own version of a supplemental budget, making large cuts following lower tax revenue projections. $46.1 million was cut from Governor Neil Abercrombie’s Fiscal Year 2013-2014 proposal, and 167.9 million was taken out of Fiscal Year 2014-2015. The senate version of the […]

$46.1 million was cut from Governor Neil Abercrombie’s Fiscal Year 2013-2014 proposal, and 167.9 million was taken out of Fiscal Year 2014-2015. The senate version of the bill contains funding for the UH-Hilo College of Pharmacy building, as did the House version of the budget. Also, in a separate measure, the senate has seen fit to fund in full the proposed Kona Judiciary complex. The $50 million dollar addition will cover the $90 million cost for the needed court facility. 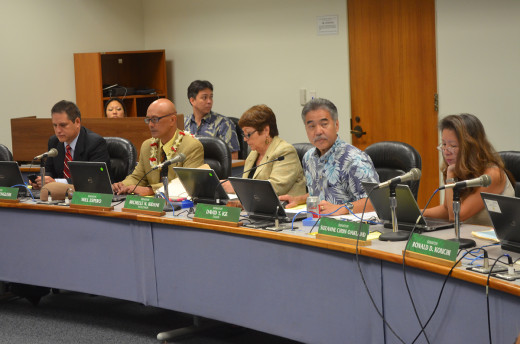 As the video above shows, the senate’s sole Republican Sam Slom was not entirely pleased with the spending plan, despite being touted as “fiscally responsible”.

The bill will eventually end up in conference committee, where representatives from the House and Senate will try to reach an agreement the many aspects of the budget.

Following lower tax revenue projections, the Senate Committee on Ways and Means today passed a fiscally responsible HB1700 HD1 SD1, the supplemental appropriations act of 2014, which includes less spending while continuing to support education, health, human services, the environment and public safety. The bill adjusts appropriations for the operating and capital improvement budgets of the Executive Branch for Fiscal Biennium 2013-2015.

“As we did last year, the Senate displayed fiscal restraint. Given weak revenue projections, we made smart policy decisions by taking a conservative and responsible approach to the supplemental budget,” said Sen. David Ige, chair of the Senate Ways and Means Committee.

On March 11, 2014, the Council on Revenues reduced its projected general fund tax revenue growth, from 3.3 percent to zero percent in FY2013-2014 and 7.4 percent to 5.5 percent in FY2014-2015. Combining this with the Department of Budget and Finance’s estimated reduction of general fund non-tax revenue growth, it’s projected that there will be a cumulative total of $491.8 million less in general funds over the current fiscal biennium.

The bill does not include funding for certain administration requests that are intended to be funded under other appropriation measures, including joint majority package bills. Sen. Ige said that these reductions should not be counted as actual “savings.” The reductions include $33.5 million for the UHPA salaries, $1.0 million for the Hawaii Invasive Species Council, and $4.9 million for Kupuna Care and other senior citizen programs.

“We wanted to take prompt action to ensure that there would be enough time in conference and continue discussions with our counterparts in the House,” added Ige.

The following are major general fund appropriations included in the Senate version of the bill:

Department of Land and Natural Resources