Video by David Corrigan, voice of Stephanie Salazar HONOKAA, Hawaii – The Governor’s Saturday morning campaign event in Honokaa was confusing to many in attendance, who thought they had come for a talk story on important issues facing the region. News reports touted a brunch where the governor would listen to the community, and unofficial […]

HONOKAA, Hawaii – The Governor’s Saturday morning campaign event in Honokaa was confusing to many in attendance, who thought they had come for a talk story on important issues facing the region.

News reports touted a brunch where the governor would listen to the community, and unofficial emails suggested that topics would include a Waipio Valley land sale bill moving through the legislature as well as concerns over the Rain Follows the Forest initiative and its impact on local hunting practices. Many hunters and Waipio Valley landowners who came were surprised to find out the event was more of a campaign rally.

The situation grew more tense when a passionate Hawaiian chant was performed outside the Honokaa school cafeteria – right at the conclusion of the campaign’s “Electric Slide” dance – in defiance of the administration’s support of the further development of Mauna Kea.

A short time later, a group gathered outside erupted with a chant led by Kumu Lanakila Mangauil in defense of Mauna Kea. 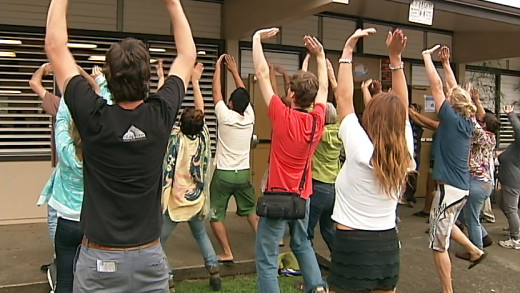 So stoped by the governors “talk story” though it waz only for a few to give their spill. Governor pretty much started his speech with, ” we are building the TMT!” “we are continuing what the Polynesians started!” What!! So with that, from front and center where I was sitting and stood up and walked straight out! How dare u use my kupuna to push your agenda of desecration to our sacred temple!! As my dear aunty Ka’iulani helped me calm out side I noticed so many others walking out behind me. Pretty much emptied the cafeteria I was told. Then at the end, I could not let those words be uttered in my wahi without addressing it. So after they finished the “Electric Slide” we let our Leo fill the air, from outside ‘MAI KA PIKO O KA MOKU A MAUNA-A-WÃKEA!! O HÃNAU KA MAUNA-A-WÃKEA!! We called the name of our kupuna, akua, mauna! We pa’i our umauma and ku’i ou wawae so our mauna knows we are not in agreement with his words. No, my kupuna did NOT destroy the sacred navel, the PIKO of the moku to gaze into the heavens! Here is a Polynesian, and no you are not continueing what my kupuna did! Ku pa’a e Hamakua i keia la!

Meanwhile, hunters and Waipio land owners left in a state of frustration, after the governor spoke very little about the issues of their concern in his public address. Although the governor spoke to some in attendance before the speeches began, there was no dialogue from the podium on Waipio or hunting.

We’ve been told that another meeting is being planned on those topics next Sunday in Honokaa, however the governor is not expected to attend.