Video courtesy University of Hawaii, voice of Stephanie Salazar MAUNA LOA, Hawaii – Six crew members have been locked inside a 36 foot high dome, and sealed off from the outside world, as a new simulated space odyssey began this weekend on Hawaii Island. Under a dark sky and on top of the martian-like landscape […]

MAUNA LOA, Hawaii – Six crew members have been locked inside a 36 foot high dome, and sealed off from the outside world, as a new simulated space odyssey began this weekend on Hawaii Island.

Under a dark sky and on top of the martian-like landscape of Mauna Loa volcano, the brave participants of the Hawai‘i Space Exploration and Analog Simulation mission entered their remote habitat on the first night of a four-month-long journey.

Before entering the dome, the preparation was documented by a University of Hawaii video crew at the Kilauea Military Camp staging area. These willing test subjects will help NASA better understand the different emotional and psychological effects of a long duration trip to Mars, which scientists estimate could take three years to complete round-trip.

After arriving at the site, Commander Casey Stedman closed the simulated air lock behind the crew, sealing the habitat and cutting off all physical contact with the outside world for the next 120 days.

In June 2013, NASA awarded UH Mānoa $1.2 million to support three space analog missions over the next three years: this one, which is four months, and two others eight months long, and one year in duration.

The new HI-SEAS research follows a successful food study conducted last year. This video is from the last mission and shows the closely monitored interior of the habitat.

Using surveillance cameras, electronic surveys, crew member diaries and other sources, researchers from the University of Hawai‘i at Mānoa will be keeping an eye on the crew, as they did during the last mission. Researchers are tracking group cohesion and a wide range of cognitive, social and emotional factors. They are particularly interested in how technical, social, and task roles within the group evolve over time and how they affect performance.

The solar-powered dome has a first floor kitchen, dining area, bathroom with shower, a lab, and exercise and common spaces. A second floor loft features six tiny bedrooms and a half bath.

It’s a thorough simulation. Crew members will even suit up in mockup spacesuits whenever they step outside of the habitat. These “excursions” are modeled after extraterrestrial surface explorations such as those conducted during the Apollo missions to the Moon. 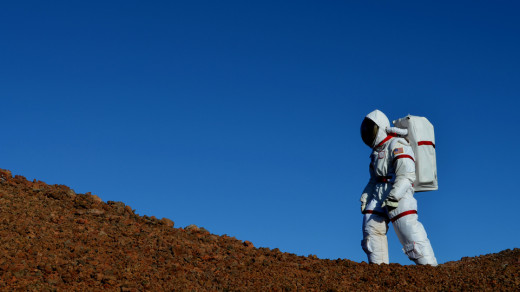 The last mission went well, as all crew members emerged from the dome alive and well after their sequestration.