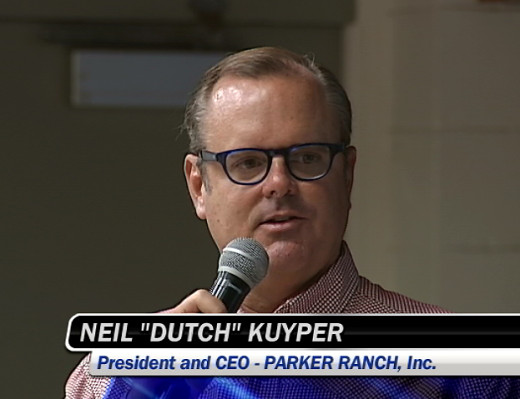 Neil “Dutch” Kuyper did the talking Thursday night. “No bulai” he promised.

The preliminary results from our energy team, led by Siemens, tell us there is the real opportunity to attract capital to invest in our community grid concept.”Neil “Dutch” Kuyper, CEO of Parker Ranch – April 2, 2014

Parker Ranch hired a consortium led by Siemens to evaluate the merits of a community-based energy solution for Greater Waimea and Kohala as well as prepare a utility-grade integrated resource plan.

Hawaii Island electric rates from Hawaii Electric Light Co. (HELCO) are consistently more than 37 cents a kilowatt-hour, and often well over 40 cents, despite nearly half of the island’s electricity being generated from renewable sources. The national average for electricity rates last year was 12.5 cents per kilowatt-hour.Parker Ranch media release 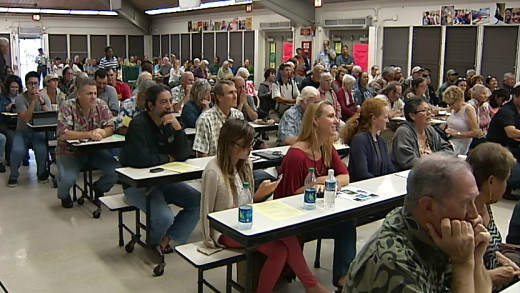 The community was buzzing over the potential to reduce the cost of electricity in Waimea and Kohala. The ranch is looking at installing large amounts of new, predominantly renewable generation and a micro-grid to serve these communities.

A micro-grid is a small electric system that serves a distinct area but still may be connected to the larger macro-grid owned and operated by the local utility. During the coming summer, Parker Ranch plans to present additional results from the ongoing study, which reflect the potential to lower the cost of electricity for the entire Big Island.

Parker Ranch initiated the integrated resource plan to explore whether a community-scale micro-grid could provide lower electricity costs to the Waimea/Kohala region. This region, on the northwest side of the Big Island, is rich with natural resources, such as strong winds and consistent solar radiation. The Big Island electric utility, Hawaii Electric Light Company (HELCO), has had difficulties accepting additional renewable resources on its grid and has even limited the amount of energy it will accept from existing renewable resources. This study was designed to see if additional renewable resources could be added, separate and distinct from the HELCO grid, while also reducing the cost of electricity for residents and businesses.

The concept of a micro-grid could be valuable not only to the Waimea/Kohala region, but also to other regions on the Big Island and to the State of Hawaii. A combination of multiple micro-grids on the Big Island, each incorporating different energy sources, may offer a compelling alternative strategy for meeting the electricity needs of the Big Island at a lower cost. Micro-grid solutions have the potential of offering Hawai’i benefits beyond just lowering electricity prices. For example, they also come with state of the art controls that could increase the renewable energy contribution and lower the amount of energy consumed.Waimea Community Association media release

We think that the residents and businesses of the Big Island could be better served by a series of community solutions with regional level distributed generation focusing on our plentiful renewable resources. Because our island is so large, it is in a sense a few islands within the island. Waimea is 55 miles from Kona and 60 miles from Hilo. A combination of several regional solutions for the various parts of the island seems to make logical sense.”Neil “Dutch” Kuyper, CEO of Parker Ranch – April 2, 2014

PANIOLO POWER
The community was also excited about the launch of Parker Ranch’s new subsidiary, Paniolo Power Company LLC. According to a media release, the company has begun discussions with potential operating and capital partners to manage and fund the effort. “We are pleased and excited about the inquiries that we have received in recent months to co-invest in our concept,” said Kuyper in the release. “My background lends itself to raise capital for these kinds of investments.” 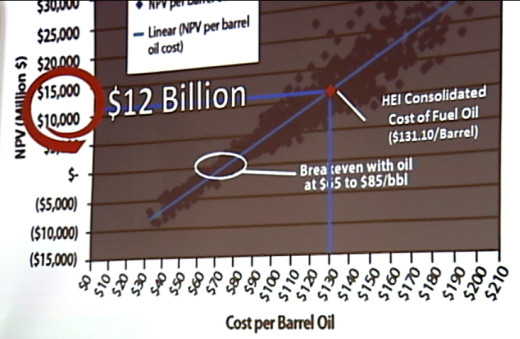 SENATOR SUPPORTS
In a written statement, State Senator Malama Solomon said she supports the new endeavor by the ranch.

Our island electric rates are exorbitant, consistently more than 37 cents a kilowatt-hour. We need to diversify and find new ways to lower utility rates for Hawai‘i Island residents and businesses. I’m looking forward to the community meeting with Parker Ranch and wholeheartedly support its new endeavor.

“Hawai‘i Island is facing an economic and energy crisis that has resulted in spiraling electricity costs for rate payers, economic stagnation, increasing unemployment as well as poverty for our residents. For years, Hawai‘i Electric Light Company (HELCO) has pursued its own private development agenda, ignoring the availability of vast quantities of geothermal resources, which could be developed affordably. Instead, Hawai‘i Island has remained fossil-fuel dependent in large part because HELCO’s priorities have been to maintain its own fossil fuel/bio fuel operations and investments while ignoring and endlessly delaying energy development utilizing our vast and reliable geothermal resources.”Senator Malama Solomon, District 4 – statement issued April 2, 2014

Senator Solomon was in attendance in Waimea to see Kuyper’s presentation.

About Parker Ranch
Parker Ranch was established in 1847 and remains one of the largest and oldest cattle ranches in the United States. In 1992, it was left in a charitable trust following the death of sixth generation Parker descendant, Richard Palmer Kaleioku Smart, for the benefit of charitable organizations located in the Waimea community on Hawaii Island. The beneficiaries are North Hawaii Community Hospital, Hawaii Preparatory Academy, Parker School and the Richard Smart Fund of the Hawaii Community Foundation. Parker Ranch continues cattle ranching and is proactively leveraging its and the trust’s resources to support the trust’s beneficiaries, achieve a secure energy future, expand the sustainability of local food systems, and facilitate the general betterment of the Waimea area. To learn more, visit www.parkerranch.com and www.prft.org. Parker Ranch media release