Video by David Corrigan HILO, Hawaii – After Mayor Billy Kenoi’s proposed budget presentation to the Hawaii County Council on Wednesday, Kohala councilwoman Margaret Wille had a chance to ask a few questions. After thanking the mayor for his work on ethics reform, support of the North Kohala video conference site, and his signing of […]

After thanking the mayor for his work on ethics reform, support of the North Kohala video conference site, and his signing of Bill 113 banning new GMO crops, Wille began a discussion on the administration’s position on Community Development Plans.

Community Development Plans (or CDPs) are intended to be the process through which Hawaii Island’s different districts – like Kona or Puna, for example – plan for the future. They are a key component of the Hawaii County General Plan, approved in 2005 by the County Council. However, there has been some debate over the legal strength of the plans. Some see them as legally binding planning documents that carry the force of law. Others see them more as road maps; guidelines for best practices and preferences for growth.

Wille has been heavily involved in the process to support the South Kohala CDP and the North Kohala CDP. In the past, as a citizen, she has harangued the mayor and department heads over the issue. Now, as an elected councilwoman, she has promised to “insist on County compliance with the Community Development Plans.”

The Q & A with the mayor was a chance to talk about some of her concerns. 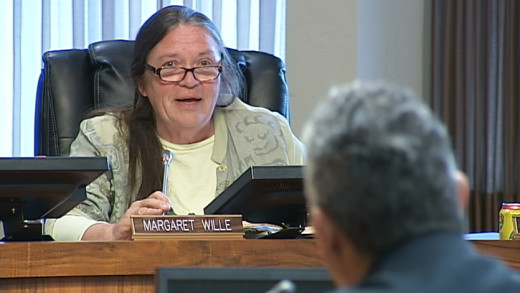 (:05) Wille thanks the mayor for his work on ethics reform, support of the North Kohala video conference site, and his signing of Bill 113

(1:05) Wille asks Mayor Kenoi if the CDPs could be memorialized in the county charter

(1:55) Mayor Kenoi categorizes his administration’s support of the CDPs as committed, citing the $411,000 appropriation to the Hamakua CDP process in tough fiscal times, and the current $495,000 for the general plan update.

(2:30) Mayor Kenoi admits the CDP process is a challenge, but says its supposed to be.

(3:26) Mayor Kenoi says he and the planning department just had a meeting on one of the CDPs and they are holding their consultant’s “feet to the fire” demanding the county gets quality plans put forward.

(4:00) Mayor Kenoi says he is not sure about Wille’s question on memorializing the CDPs within the county charter, or specifically what requests have been made.

(5:00) As an example, Wille mentions the lack of a community meeting area in the Kawaihae area.