POHAKULOA TRAINING AREA, Hawaii – Residents living on Hawaii Island were recently surprised to learn their island was the target of a “long-duration, coordinated training mission” in which two B-52 Stratofortresses and two B-2 bombers dropped “inert ordnance on Hawaii’s Pohakuloa military weapon range”. Military training at Pohakuloa is nothing new, but a 8,000 mile non-stop flight […] 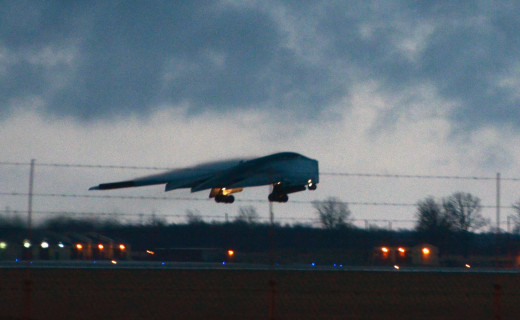 A B-2 Spirit bomber takes off at dawn from Whiteman Air Force Base, Mo, April 2, 2014. Two B-2s and two B-52 Stratofortress bombers from Barksdale Air Force Base, La., flew nonstop from their respective home stations to training ranges within the vicinity of Hawaii and conducted long range training operations and low approach flights at Hickam Air Force Base. (U.S. Air National Guard photo by Senior Master Sgt. Mary-Dale Amison)

POHAKULOA TRAINING AREA, Hawaii – Residents living on Hawaii Island were recently surprised to learn their island was the target of a “long-duration, coordinated training mission” in which two B-52 Stratofortresses and two B-2 bombers dropped “inert ordnance on Hawaii’s Pohakuloa military weapon range”.

Military training at Pohakuloa is nothing new, but a 8,000 mile non-stop flight to – as the Air Force reports – “exercise the president’s credible and flexible military options”, is rare. So rare, the U.S. Strategic Command Public Affairs issued a media release about the exercise. Although everyday civilians had no idea the mission was planned or had been carried out, the event was hardly top secret, considering this official media release surfaced a short time later:

OFFUTT AIR FORCE BASE, Neb. (AFNS) — Two B-52 Stratofortresses from Barksdale Air Force Base, La., and two B-2 Spirit bombers from Whiteman Air Force Base, Mo., recently flew non-stop from their home stations to training ranges in Hawaii to exercise the president’s credible and flexible military options to meet national security obligations to the U.S. and its allies. Part of the mission was to conduct coordinated range operations amongst multiple airframes as well as test low approach training capabilities before returning to their bases.

The mission, which spanned nearly 8,000 miles from home station to the drop site and back to the home installation, tested the ability for planners to coordinate operations between combatant commands and amongst multiple Air Force wings. The 20-plus hour training missions also demonstrated the U.S.’ capability to provide a flexible and always-ready force to respond to a variety of threats and situations within U.S. Strategic Command’s global strike and strategic deterrence missions.

During the training mission, bomber crews enhanced their operational proficiency and readiness by releasing their inert ordnance on Hawaii’s Pohakuloa military weapon range. They also honed their skills at operating during a long duration flight; an important element of U.S. Strategic Command’s enduring deterrence capability.

“These tailored exercises are vital to assuring our nation’s leaders and our allies that we have the right mix of aircraft and skill to strike at the time and place of our choosing,” General Vander Hamm said.

The Department of Defense routinely conducts training missions to ensure the U.S. has a credible capability to respond to a variety of levels of threats and to provide the President a variety of options he may need to protect the nation or its allies and partners.

“Most bomber missions are long duration like this. The experience gained from this kind of training mission is invaluable,” said Lt. Col. Ryan Link, 96th Bomb Squadron commander, Barksdale AFB. “We boost our coordination capabilities and flying skills, and our bomber force is better for it.”

The B-2 and B-52 are long-range, multi-role bombers capable of delivering both conventional and nuclear munitions. Both bombers can fly at high subsonic speeds at altitudes up to 50,000 feet. U.S. Strategic Command Public Affairs

Peace activist Jim Albertini was not pleased to hear the news. “Training for what?” Albertini asked in an email sent to media. “A bunker buster attack on Iran, Syria, Russia, North Korea? Just the cost of fuel alone used in these bombing missions could have fed a lot of hungry people.”

Some “cold war” theories were considered in this article about the bombing on the Aviationist website:

On a side note, the news of the Global Strike mission to the Hawaiian range comes few days after Russia’s announcement to base its Tu-22M Backfire strategic bombers to Crimea.

As reported by Jane’s Defense Weekly a Russian Ministry of Defence (MoD) spokesman told the Interfax news agency on that it planned to establish a “missile-carrying regiment” on the Crimea near its capital, Simferopol. In a matter of a couple of years the Russian Air Force plans to have a base for a missile-carrying regiment of Tu-22M3 in the Black Sea.

“The need for [the Tu-22M3s] in the southern direction was always there, but now there are just the right conditions for them to return to the Crimea, which used to be called an unsinkable aircraft carrier,” said the spokesman according to IHS Jane’s Defence Weekly.

In other words, a new Cold War is gearing up and Global Strike mission could soon become even more frequent.David Cenciotti on The Aviationist – Apr. 3, 2014