HAWAII ISLAND – A timely Volcano Watch article this week from the scientists at the U.S. Geological Survey`s Hawaiian Volcano Observatory, addressing the growing public concerns over the Kahauale‘a 2 lava flow. The lava flow, which continues to move slowly northeast through the forest of Puna mauka, was first covered by Big Island Video News in January. We made use of an informative talk story segment from an After Dark in the Park video filmed by the National Park Service.

Now, USGS HVO scientists are providing an update in their weekly column:

The Kahauale‘a 2 lava flow, fed by a vent on the northeast edge of the Pu‘u ‘Ō‘ō crater, is currently the only active flow along Kīlauea Volcano’s East Rift Zone. In recent weeks, this flow has been the topic of several media reports, causing concern in Puna communities downhill from the flow.

Throughout this ongoing eruption, whenever any change in lava flow activity translated to a possible threat or impact to nearby communities, HVO immediately relayed the hazard information to Hawai‘i County Civil Defense, which took appropriate action to keep people safe. This same collaboration exists with the Kahauale‘a 2 lava flow.

Knowledge can ease worry, so here are the facts about the Kahauale‘a 2 lava flow—as we know them at the time of this writing (April 24, 2014).

For most of the past year, the Kahauale‘a 2 flow slowly advanced to the northeast, a direction that might seem alarming, given that Kīlauea’s ongoing eruption has mostly sent lava flows to the south during the past 31 years. But this trend is not a first.

Several residential subdivisions north and west of Pāhoa and a section of Highway 130 are downhill from the Kahauale‘a 2 lava flow. So, should Puna residents be worried about the flow—now or in the future?

Given its slow and erratic forward progress, the Kahauale‘a 2 flow does not pose an immediate threat to any Puna subdivision at this time. The longer this non-threatening activity continues, the more likely it is that the vent will be disrupted, sending lava in a different direction. Such a disruption may have started on April 22, but it is too soon to determine its full impact.

The Kahauale‘a 2 flow has advanced only 1.2 km (0.75 mi) in the past five months. Two factors contribute to this slow, inconsistent progress: low eruption rate (Kīlauea’s current eruption rate is estimated to be half its long-term average rate), and recurring deflation-inflation (DI) events (http://hvo.wr.usgs.gov/volcanowatch/view.php?id=117).

During DI inflation, lava feeds the flow, allowing it to advance. But during DI deflation, the lava supply can be disrupted, causing the flow to stall. Then, with the return to DI inflation, the flow reactivates, but the “new” lava typically breaks out well behind the stalled flow front.

Thanks to recent abundant rainfall, lava-ignited fires are not spreading through forest far beyond the flow margin. But, depending on wind direction, residents in downwind areas might occasionally detect smoke from small, localized brush fires adjacent to the flow.

What about the Kahauale‘a 2 flow’s future activity?

Whether or not the lava flow becomes a threat to Puna residents will depend on the eruption rate and the flow’s advance rate in the coming months. Therefore, HVO will maintain a close watch on the flow’s progress, and Hawai‘i County Civil Defense will continue monitoring potential threats to people and property.

What should concerned residents do at this time? Your best action is to stay informed. Here’s how.

Read HVO’s daily updates on Kīlauea’s eruptions, including details about and current maps of the Kahauale‘a 2 lava flow, posted at http://hvo.wr.usgs.gov/activity/kilaueastatus.php. Sign up to receive Hawai‘i County Civil Defense alerts by emailing civildefense@co.hawaii.hi.us or calling 808-935-0031.

The only “constant” on Kīlauea is “change.” So, changes to the Kahauale‘a 2 lava flow—for better or for worse—can be expected, underscoring the need for residents to keep informed. 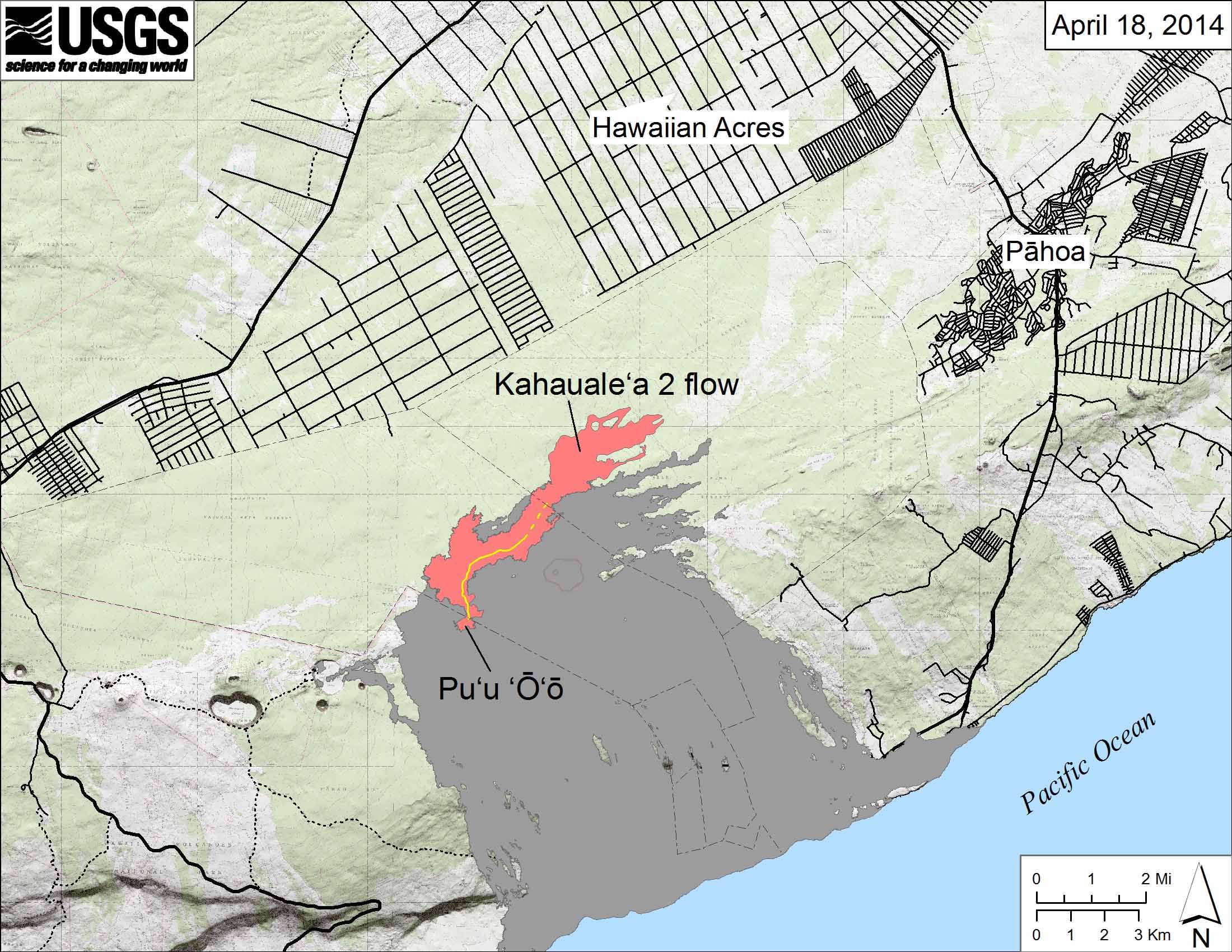 The Kahaualeʻa 2 lava flow, as of April 18, 2014, is shown in pink, with a yellow line indicating the active lava tube. The most distant active front of the flow retreated over the past week, probably in response to a DI event. The area covered by older lava flows erupted from Kīlauea in 1983‒2013 is shown in gray. An updated map is posted at http://hvo.wr.usgs.gov/maps/ after every Hawaiian Volcano Observatory overflight of the flow.