Construction began in January on the park off Ainaloa Drive. The project was handled by the Hawaii County Department of Parks and Recreation, and is part of the administration’s ongoing commitment to improving playgrounds across the island. 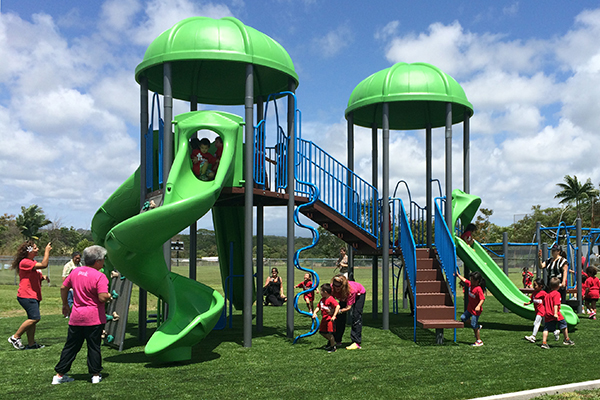 A public blessing and dedication ceremony for a new playground at Waiākea Uka Park was held this morning, and preschoolers from nearby Hale Aloha Nazarene School were the first to enjoy the new facility. Mayor Billy Kenoi, County Councilman Dennis “Fresh” Onishi and Department of Parks and Recreation Director Clayton Honma were among the dignitaries attending the opening of the new playground.

“This is not just for the kids, it’s for the parents and grandparents,” said Mayor Kenoi. “It’s like a pu‘uhonua, a safe haven, it’s a place for all of us to be together.”

Replacement playgrounds also are being installed at Kailua Park in Kona and Hilo’s Gilbert Carvalho Park. When completed in the coming months, those projects will boost the County of Hawai‘i’s investment in keiki playgrounds to more than $3 million in less than six years.