The above image shows a new lava shield being built on Puʻu ʻŌʻō, courtesy the USGS Hawaiian Volcano Observatory

HAWAII VOLCANOES NATIONAL PARK, Hawaii – The June 27 lava breakout at the active Puʻu ʻŌʻō crater on the East Rift of Kilauea volcano is creating a new lava shield. The new activity has also put an end to the slowly advancing Kahaualeʻa 2 lava flow that was creeping in the direction of Puna mauka subdivisions.

The comparison image (above) posted to the USGS Hawaiian Volcano Observatory website shows the before and after.

This new phase was summarized in a recent HVO Volcano Watch article:

For the past year, the Kahaualeʻa 2 lava flow was erupting from a vent high on the northeast crater rim of Puʻu ʻŌʻō, on Kīlauea’s East Rift Zone, sending lava towards the northeast. Although this lava flow advanced very slowly, and erratically, it was uphill from residential areas and posed a potential future hazard. Several interruptions to the lava supply at the vent occurred over the past year but nothing quite large enough to terminate the flow. In the early morning hours of Friday, June 27, the terminal event finally arrived.

Prior to June 27, HVO had been tracking inflation at Puʻu ʻŌʻō for several weeks. Several small lava flows erupted from spatter cones on the Puʻu ʻŌʻō crater floor in the week before the event—another sign of pressurization and high lava levels. Slow deflation of the cone began around 5:30 a.m. on June 27, around the time that a handful of small earthquakes appeared. Both the deflation and the earthquakes may have represented magma starting, or trying, to intrude through the cone.

The breaking point was finally reached just before 7 a.m. Our Webcams showed a portion of the northeast flank of Puʻu ʻŌʻō pushed up slightly—perhaps several meters (yards)—as magma forced its way through the side of the cone. Magma reached the surface moments later, tearing open new fissures on the northeast flank and sending out a gush of lava as the built-up pressure was released. Bursts of seismic tremor, sharp deflation, and sagging of Puʻu ʻŌʻō’s crater floor accompanied the opening of the new flank vents as magma stored beneath the cone drained out to feed the new flows.

The initial phases of this new activity were impressive. Four fissures opened, with the most vigorous being the lowest in elevation. This fissure sent out a beautiful channelized flow on the opening day, reaching about 1.5 km (0.9 miles) in length, but the vigor of the eruption soon abated as the excess pressure in Puʻu ʻŌʻō was relieved.

By the second day, activity had focused on the lowest fissure, and flows were extending only a short distance from this vent. These short flows have been stacking up on one another, building a broad lava shield on the flank of Puʻu ʻŌʻō. This lava shield activity continues today.

The June 27 breakout followed a pattern that we have observed before. During 2011, several cycles of pressure buildup in the magmatic system resulted in new vents forming on, or near, Puʻu ʻŌʻō. In each case, the new vents acted as a kind of pressure release “valve.” But this has occurred in several ways. The March 2011 Kamoamoa eruption resulted from a failure in the deeper conduit that is supplying magma from the summit, along the East Rift Zone, to Puʻu ʻŌʻō. Because that magma originated from a depth of several kilometers, it was still rich in gas when it rose to the surface, driving several days of spectacular lava fountaining.

The June 27 event had no such fountaining, likely because the magma was drawn from a shallow depth and was already partly degassed. In this way, it was roughly similar to the August 2011 breakout, which again resulted from magma beneath Puʻu ʻŌʻō intruding through the side of the cone. A simple analogy is punching a hole in the side of a bucket filled with water. The flow rate through the hole will be greatest at the start, driven by the hydraulic head pressure of the water column. As the water level drops, this hydraulic pressure drops with it, and the flow rate decreases.

Compared to previous events, the June 27 breakout was relatively small, but it had an important effect on the East Rift Zone eruption. The lava level drop in Puʻu ʻŌʻō resulted in the lava supply to the Kahaualeʻa 2 flow being shut off. This killed the Kahaualeʻa 2 flow but may have simply replaced it with a new long-term hazard concern. The lava from the June 27 breakout is, like the Kahaualeʻa 2 flow, heading in a northeastern direction and could eventually pose a similar threat to downslope communities. The June 27 flows are, however, very slow-moving and pose no imminent threat. Continued mapping and monitoring of this new flow will help us determine what it could have in store for the future. 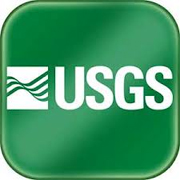 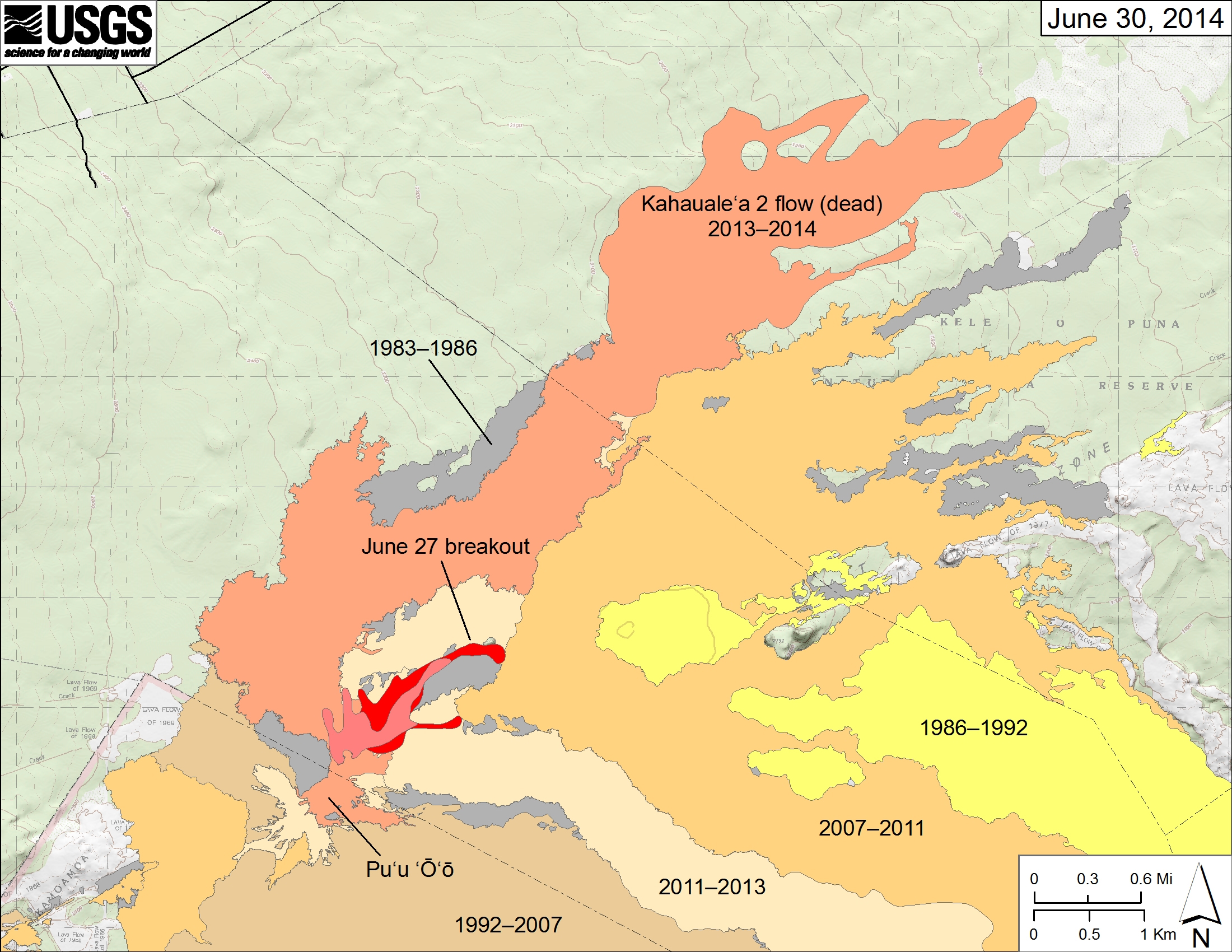