A 36 year old female in search of lava had to be airlifted out of Kahaualea Forest Reserve when she sprained her ankle on Wednesday.

The above photo shows the “beleaguered” Puʻu Kahaualeʻa that is surrounded by active Pāhoehoe lava flows, courtesy the USGS Hawaiian Volcano Observatory. Like all Kilauea lava flows, this one attracts onlookers who sometimes meet trouble on their way through the forest for a closer view.

HAWAII VOLCANOES NATIONAL PARK, Hawaii – A 36 year old female in search of lava had to be airlifted out of the Kahaualea Forest Reserve when she sprained her ankle on Wednesday evening.

The Hawaii County Fire Department reports that the female was part of a group of six hiking a three and a half mile trail through “pristine, Hawaiian rain forest dominated by old growth ohia trees and large hapuu ferns”. The group was being led by two guides from Ahiu Hawaii tours, towards an open field where they could see an active lava flow.

The female sprained her ankle walking on muddy, unstable ground, the fire department says. She called 911. The first unit was on the scene just after 5:30 p.m.

A county chopper extricated the entire group, guides included, and brought them to landing zone in the Fern Forest Subdivision. The injured woman was examined by medic personnel from Volcano Fire Station. She required no transport or any other assistance.

UPDATE (July 24 – 6:30 p.m.) – Big Island Video News notes that the 22,500-acre Kahaualea Natural Area Reserve is presently closed due to the ongoing volcanic activity. The DLNR says the situation described in this article is under investigation. 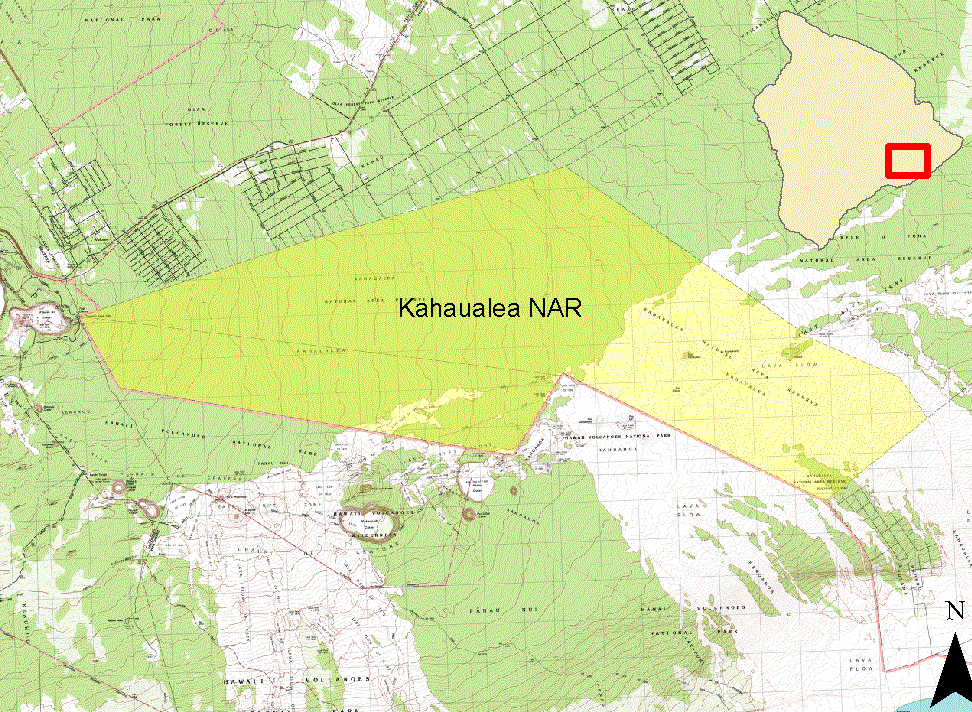 This map from the DLNR website shows the area of the Kahaualea NAR, which was established in April of 1987, with an additional area added in 2010.

The area has been closed since 2007, and this DLNR submittal to the land board from 2013 asking for an extension of the closure explains more:

Before the July 21, 2007 eruption, public use of Kahauale‘a was steadily increasing. A hiking trail (known as the Captain’s Trail, Kahauale‘a Trail, or Pu‘u ‘O‘o Trail) developed over years of use is widely publicized in visitor publications such as Hawaii Revealed and encourages people to use the trail to illegally access Pu‘u ‘O‘o, the current eruption source. The northern slope of Pu‘u ‘O‘o is within the Kahauale‘a NAR, with the majority of the vent within Hawai‘i Volcanoes National Park (NPS). The NPS continues to restrict access to Pu‘u ‘O‘o. Over the years, in response to the number of rescues and incidents at Kahauale‘a, NARS staff have partnered with the Hawai‘i Fire Department to increase signage and make minor trail improvements to minimize the number of hikers who become lost by going off-trail. The Hawai‘i County Fire Department (HCFD) has responded to 14 separate incidents of lost parties in the Kahauale‘a NAR area since May 2008, most of which occurred in 2010-2011. A number of closure signs and fenced barriers have been placed across the trail. There now seems to be an increased draw to try and view lava in Pu‘u ‘O‘o vent, as it is the only active lava in the east rift zone. Prior to March 2011, lava was entering the ocean near Kalapana and viewing activity was closely monitored by the County of Hawai‘i.

Due to public safety concerns relating to unprepared visitors attempting to visit an active lava flow and an active volcanic area and the heightened risk of sulfur dioxide inhalation, and after discussions with staff from USGS-HVO, the Board first closed Kahauale‘a NAR to public access effective July 25, 2007. Since that time, NARS staff has communicated with USGS-HVO staff on a regular basis about the status and condition of the area to confirm that the area continues to pose a safety risk to visitors. In May 2008, a Memorandum of Understanding between the Board and the USGS-HVO was entered into that allows USGS-HVO access to Kahauale‘a for the purposes of volcanic hazard monitoring and provides the Board with hazard assessments and recommendations. Staff regularly attends weekly updates at the USGS-HVO headquarters in Hawai‘i Volcanoes National Park. In addition, Division staff regularly monitors the signage and barricade at the Captain’s Trail, and DOCARE officers patrol the area.

The Division requests the Board to continue the closure initiated July 25, 2007 and to extend it for another two years, through July 24, 2015. This closure is supported by the USGS-HVO and the County of Hawai‘i Civil Defense. Should conditions change during the next years so that public access can again be safely restored, the Division will return to the Board to re-open the NAR; however, there is currently active lava flowing on to the Captain’s Trail on the Pu‘u ‘O‘o end of the trail.

During the current closure, Special Use Permit Applications to conduct research, filming, cultural practice, and other uses have been considered on a case-by-case basis with restrictive conditions, as necessary, clearly defined.DLNR, July 12, 2013