DOFAW crews have been hard at work in places like the Nanawale Forest Reserve outside Pahoa.

NANAWALE, Hawaii – There are many different government organizations helping the people of Puna cut their way out of the mess left by Hurricane Iselle. One of them is the Hawaii Department of Land and Natural Resource’s Division of Forestry and Wildlife.

DOFAW crews have been hard at work in places like the Nanawale Forest Reserve outside Pahoa. The state issued a media release showcasing the ongoing effort, and also provided some video, which Big Island Video News edited and posted for this story. The video features an interview with Steven Bergfeld, DOFAW’s Hawaii Island Branch Manager.

Tropical Storm Iselle brought down or damaged thousands of trees in Hawaii Island’s Puna District. At the request of Hawaii County, DLNR Division of Forestry and Wildlife crews have been operating chain saws and heavy equipment to clear entire trees, large limbs and other vegetation debris from roads in the Pahoa area.

Each day since last Saturday, 12-16 DOFAW workers have felled countless trees, mostly invasive, non-native Albizia trees on main thoroughfares and side roads. Many of these roads were blocked, trapping people on their properties when the towering Albizia trees crashed down during the tropical storm.

DLNR Chair William J. Aila, Jr., said: “Teams from all of DLNR’s divisions have been working hard, often around the clock, to assess and if necessary repair damage caused by the storm. We opened state parks, forests and other recreational facilities as quickly as possible with safety for our staff and the people of Hawaii being paramount.”

DOFAW administrator Lisa Hadway singled out the sawyers helping to reopen roads on the Big Island. “It is tough, dirty, demanding work; none of these people complain as they know they’re helping their friends, visitors and in some cases their own families,” she said. DLNR mediaa release (Aug. 14, 2014) 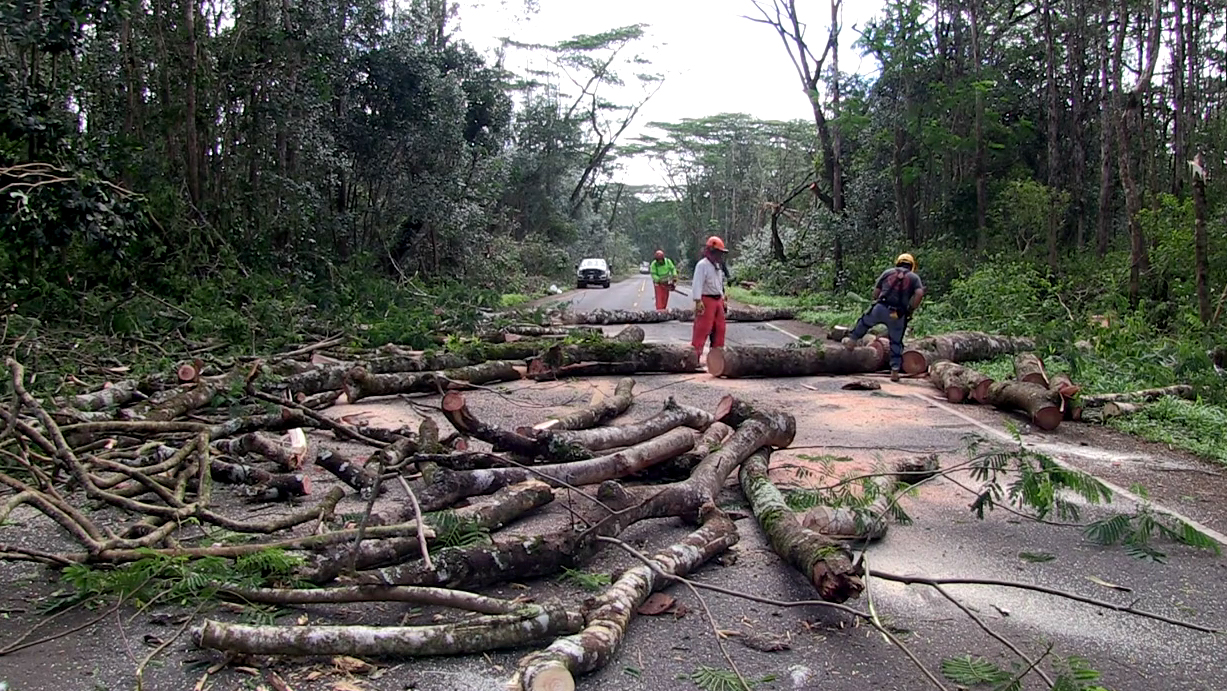 In the wake of Iselle, DLNR DOFAW crews have been hard at work clearing fallen trees in Puna