(ABOVE PHOTO) A closer look at one of the steam sources, courtesy the USGS Hawaiian Volcano Observatory. The crack from which the steam is issuing is not visible through the thick vegetation.

PUNA, Hawaii – The USGS Hawaiian Volcano Observatory is keeping a close eye on a lava flow that could be of potential concern for residents in the Puna district on Hawaii Island.

Here is the latest update from the scientists who monitor Kilauea volcano:

The farthest lobe of lava on the June 27th flow continued plunging into a deep crack in Kīlauea’s East Rift Zone about 9.4 km from the vent on Puʻu ʻŌʻō. Over the past several days, the crack has produced a line of steaming that has slowly lengthened, which suggests that lava has been traveling east-northeast within the crack. The farthest point of steaming on the crack yesterday morning was about 11.0 km from the vent on Puʻu ʻŌʻō and about 3.5 km from the eastern boundary of the Wao Kele o Puna Forest Reserve. A webcam showed glow above the steaming area overnight, suggesting that lava has emerged from the crack, or is at least close to the ground surface, though its possible that the glow might be from a closer breakout near where lava plunges into the crack. An overflight later today will assess the situation. A separate branch of the June 27th flow continued to advance into a different section of forest northeast of Puʻu ʻŌʻō and was 7.1 km from the vent on August 23. USGS Hawaiian Volcano Observatory August 25 update 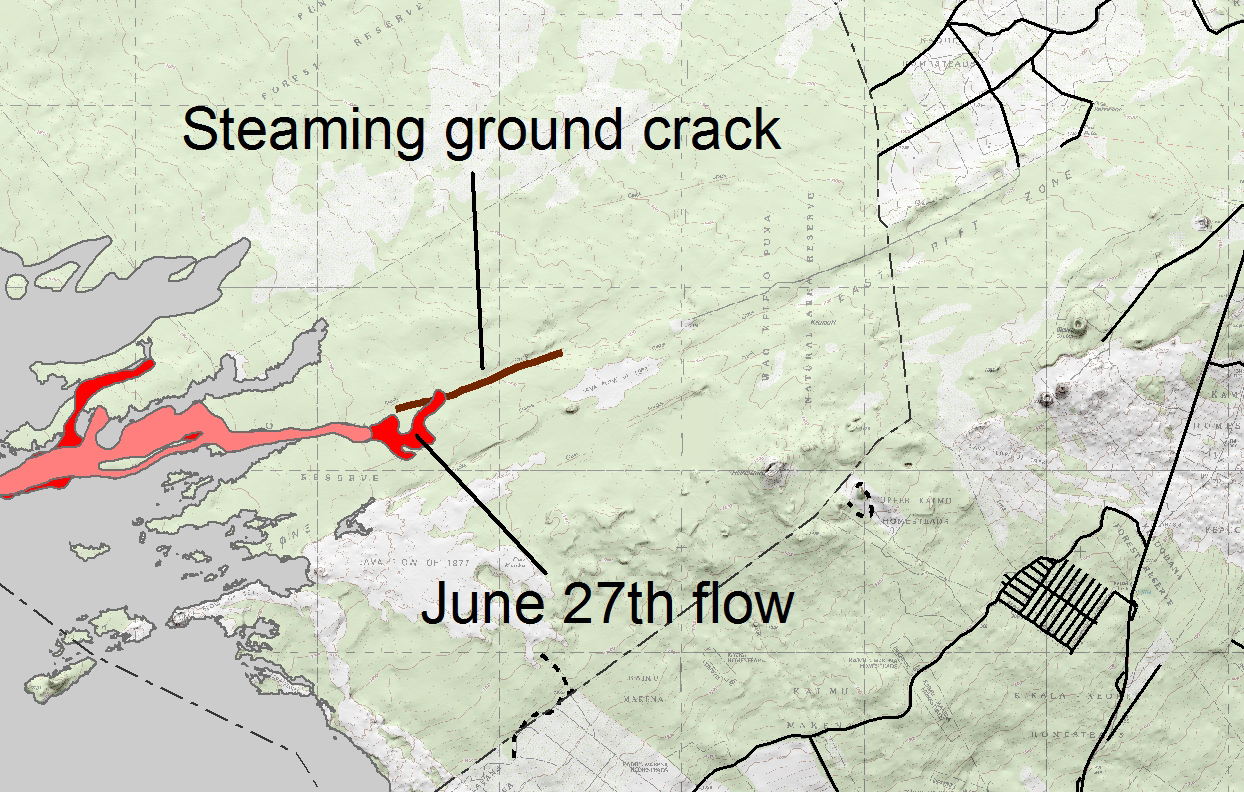 Closer look at the lava flow map posted on August 22, 2014. Black Sand Beach subdivision is seen in the lower right of the frame (USGS HVO)

A public meeting concerning this issue will be held in Pahoa tonight at 6:30 p.m. at the community center. Big Island Video News plans to have a report following the meeting.

Concern began to increase last week after the volcano observatory issued a media release on the approaching lava.

You can track the lava flow first hand using the USGS HVO website.