Activity at the front of the June 27 lava flow appears to have stalled, scientists say.

PUNA, Hawaii – Activity at the front of the June 27 lava flow appears to have stalled, scientists say, but surface flows remain active behind.

Updated photos and maps were posted to the USGS Hawaiian Volcano Observatory website on Wednesday evening. This description accompanied the USGS HVO photo seen at the top of this page:

The June 27th flow remains active, but surface flows at the very farthest reaches of the flow appear to have stalled today. The lava flow front consisted of an isolated pad of lava that emerged from a deep ground crack several days ago. Today, this pad of lava appeared inactive at the surface, with no sign obvious activity in the adjacent crack. On today’s overflight, the farthest active surface flows were on the main body of the June 27th flow, and were 8.5 km (5.3 miles) from the vent on Puʻu ʻŌʻō, or about 6 km (3.7 miles) from the eastern boundary of the Wao Kele o Puna forest reserve.USGS Hawaiian Volcano Observatory on August 27, 2014

Here is an inset taken from the latest USGS map (August 27, 2014). The map now shows subdivision names, possibly in response to requests made at recent community meetings. 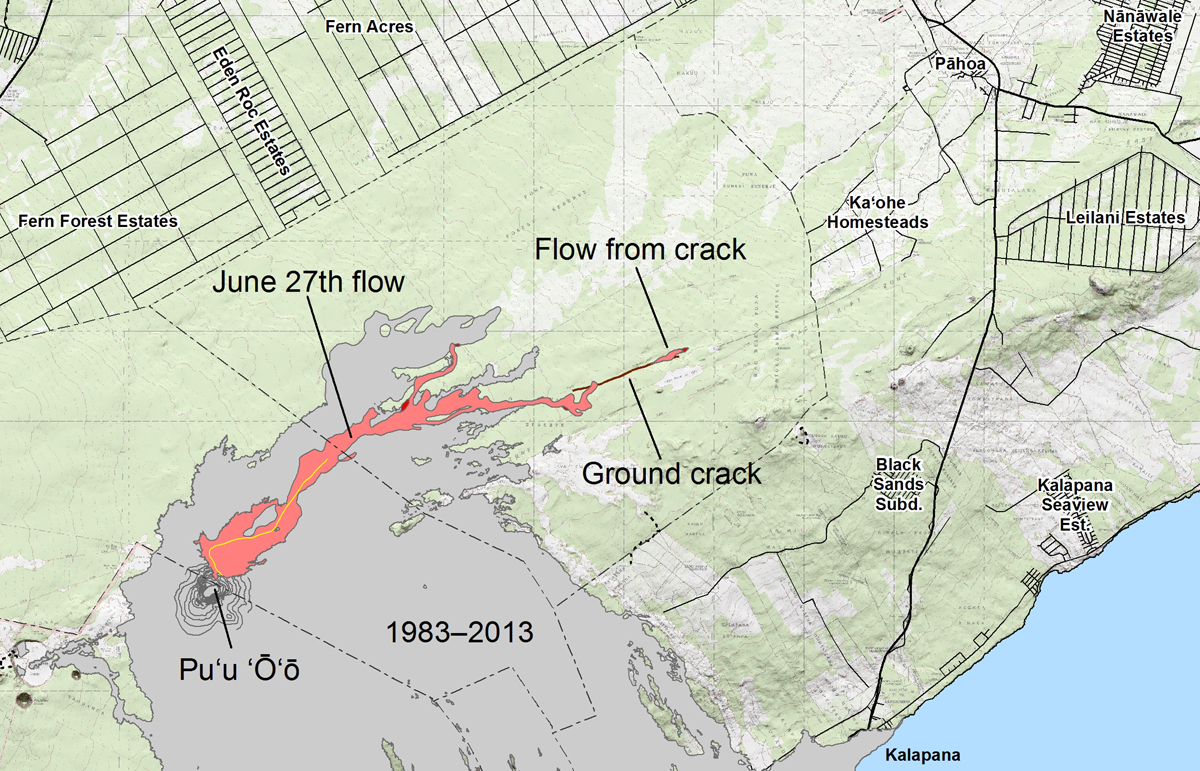 According to USGS: The area of the flow as mapped on August 25 is shown in pink, while widening and advancement of the flow as of August 27 is shown in red. The brown line marks the ground crack that channeled lava to the east, where it emerged to form a new pad of lava over the past couple of days. The distal tip of this new lava pad is 11.5 km (7.1 miles) east-northeast of Puʻu ʻŌʻō, and 3.0 km (1.9 miles) from the edge of the Wao Kele O Puna Forest Reserve. However, the tip of the flow was inactive today and there was no indication that lava was continuing to advance within ground cracks. The most distant active flows were 8.5 km (5.3 miles) from the vent. All older lava flows (1983–2014) are shown in gray. The thin yellow line marks a portion of the lava tube feeding the flow. 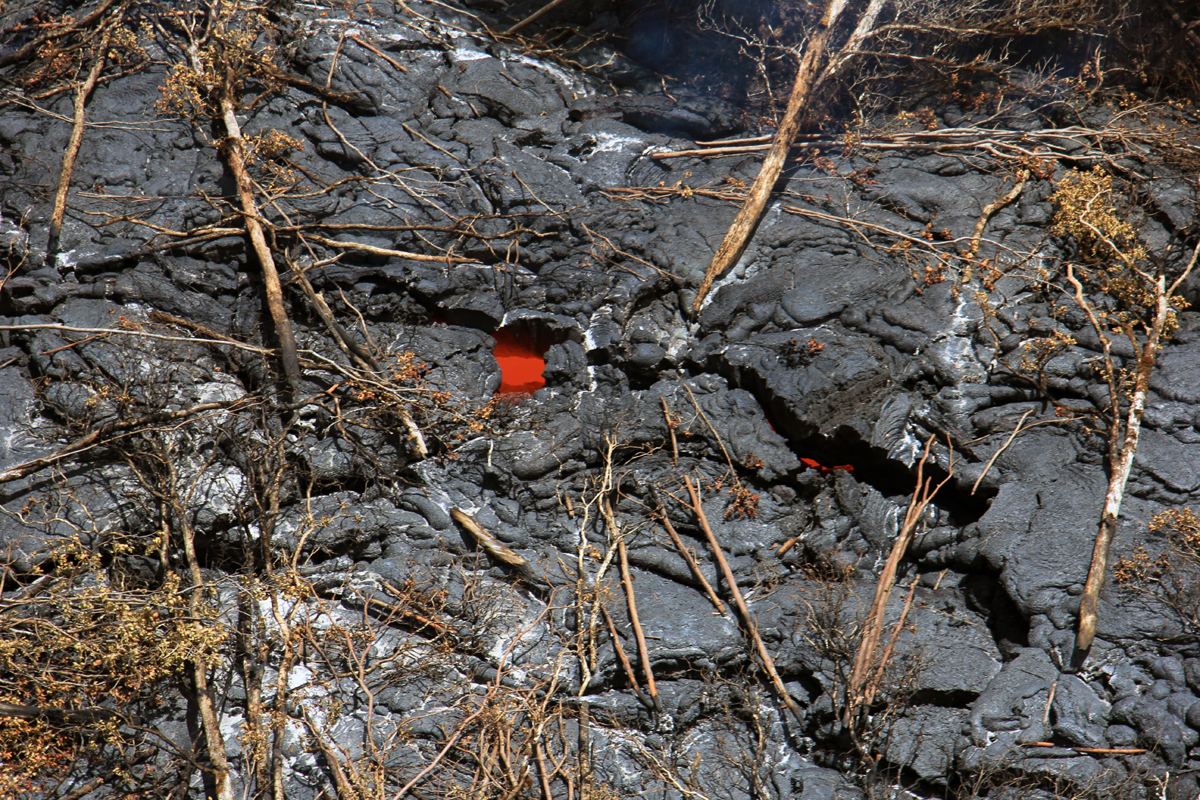 The isolated pad of lava that emerged from the deep ground crack several days ago did not have any active breakouts at the surface today, but incandescent lava could be seen in numerous cracks on the surface. This likely represents lava that had ponded within the flow and remains hot, but immobile. (USGS HVO) 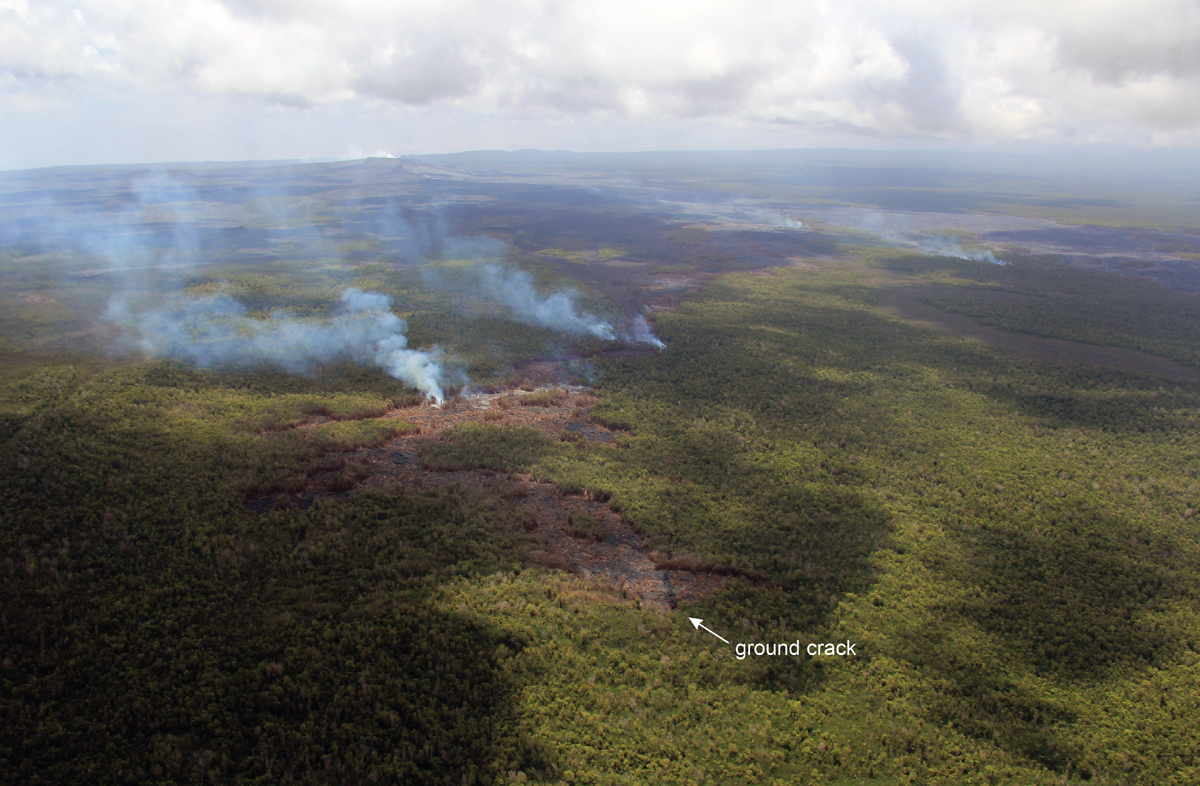 A closer view of the southern lobe of the June 27th lava flow. Smoke plumes originate from active surface breakouts, the farthest today reached 8.5 km (5.3 miles) from the vent on Puʻu ʻŌʻō. The spot at which this lobe plunged into a deep ground crack last week can be seen near the bottom of the photograph. In the upper right portion of the photograph, smoke originating from active breakouts on the northern lobe can be seen. (USGS HVO) 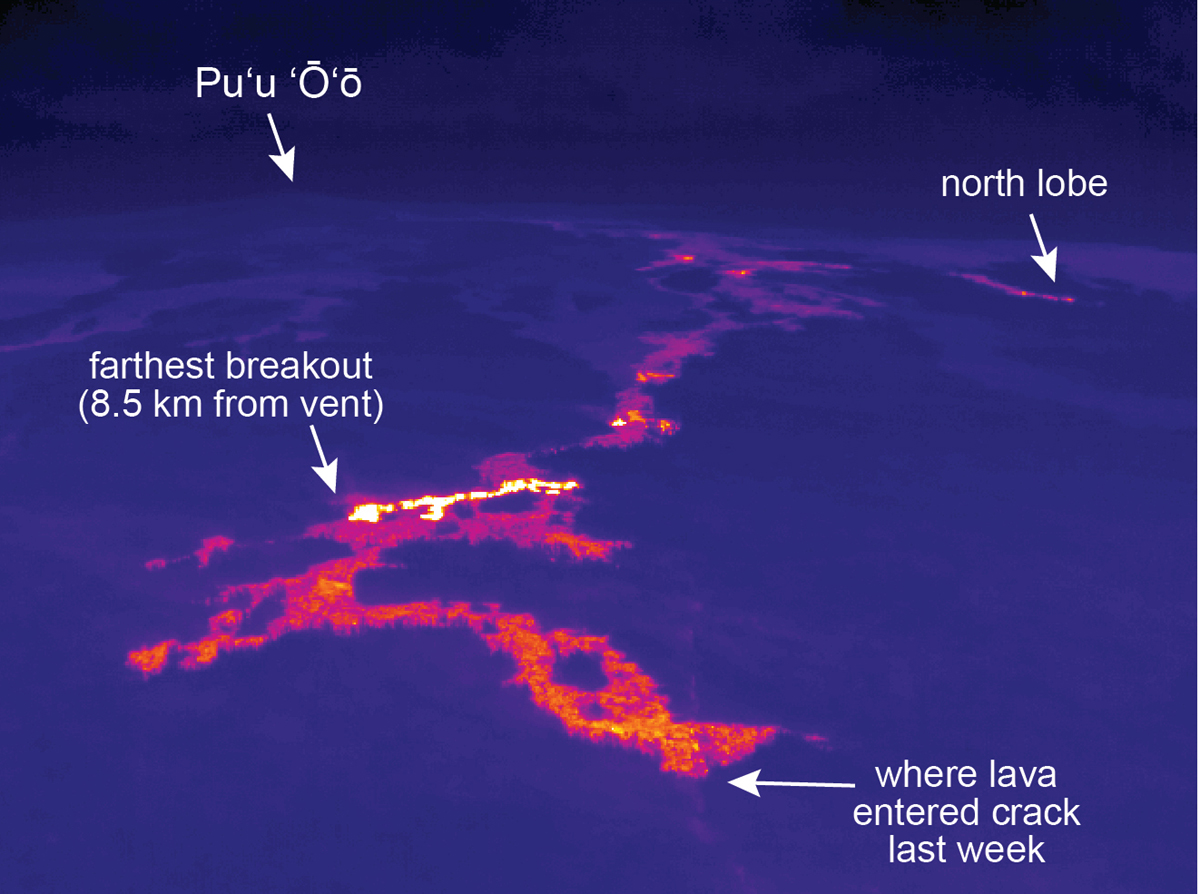 Here is the same view of the lava lobe, using a thermal camera. The thermal camera clearly shows the extent of the farthest active breakout, which was relatively small. (USGS HVO)