(PHOTO ABOVE) Hope Cermelj on the day of the election in Puna. Cermelj’s election complaint filed last week in the Supreme Court was dismissed on Thursday.

HONOLULU, Hawaii – Three election contests filed in the Hawaii Supreme Court were dismissed today. Two of them concerned the special election held in Puna following Hurricane Iselle. The third was filed by a candidate in the Maui County Mayoral race.

This is from the court order:

In the Complaint and First Amended Complaint, Plaintiffs ask the court to: (1) issue a declaratory judgment that HRS § 11-92.3 is unconstitutional; (2) issue a declaratory judgment that Defendants’ actions in response to Hurricane/Tropical Storm Iselle infringed upon Plaintiffs’ right to vote; (3) require Defendants to allow Plaintiffs and any other registered voter who did not cast a vote due to the storm to vote no later than September 20, 2014, and to notify the voters in the most effective methods of the new election date; (4) enjoin Defendants from certifying the primary election results or, in the alternative, rescind any certification of the primary election results; and (5) award reasonable attorneys’ fees and costs pursuant to 42 U.S.C. § 1988 and other applicable laws.

Plaintiffs concede that their complaint is “not a typical ‘election contest’” within the meaning of HRS §§ 11-172 (2009) or 11-173.5 (2009) and that they do not meet the statutory requirements for an election contest. Further, the court does not have jurisdiction under the statutory and constitutional provisions cited in the Complaint and First Amended Complaint to grant the relief requested.

Therefore, IT IS HEREBY ORDERED that the motions to dismiss are granted. The complaint and first amended complaint are dismissed. Hawaii State Supreme Court

The ACLU shared reaction in a media release afterwards.

Every day, the ACLU works to defend and protect civil rights, including the right to vote. We believe that every person’s vote is important, and every person who wants to vote ought to have the same opportunity to do so. Many voters in and around Pahoa did not have that opportunity, and we asked the Hawai‘i Supreme Court to step in. Although the Court declined to do so, we are grateful that the Court considered this matter so quickly. While our clients are disappointed that they will not be able to cast ballots in the primary election, the ACLU will continue its work to ensure that every person has an equal opportunity to vote – even when a natural disaster strikes – and we look forward to working with the Legislature to prevent these kinds of situations in the future.ACLU of Hawaii statement

We filmed Hope Cermelj on the day of the special election in Puna. She was sounding the alarm over the situation, as Senate candidate Rep. Colleen Hanabusa waved to voters on Kahakai Boulevard.

Here is a sample of Cermelj’s written complaint: 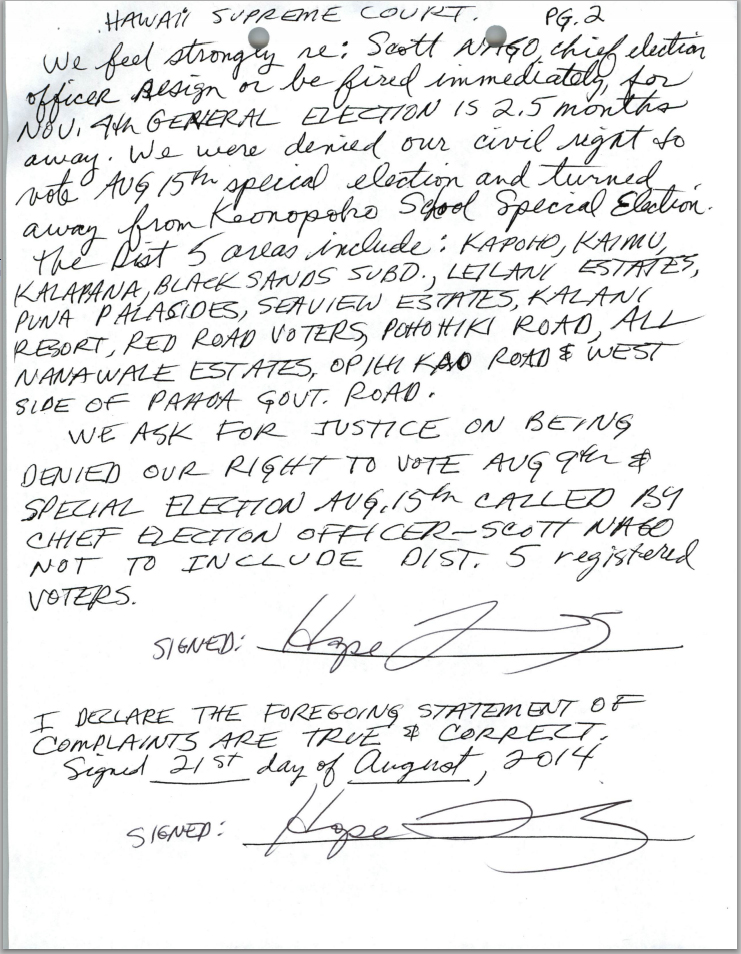 “Plaintiffs appear to be asking the court to fire Defendant (Chief Election Officer Scott) Nago,” wrote the Supreme Court in its decision, “and to provide ‘justice’ because voters were denied their right to vote.”

1. “With respect to any election, any candidate, or qualified political party directly interested, or any thirty voters of any election district, may file a complaint in the supreme court.” HRS § 11-172 (2009).

4. Even if Plaintiffs fall within a category of plaintiffs specified by HRS § 11-172, the complaint fails to set forth any allegations that would demonstrate errors, mistakes, or irregularities that would change the election result. See HRS §11-172 (an election contest complaint shall “set forth any cause or causes, such as but not limited to, provable fraud, overages, or under ages, that could cause a difference in the election results”); Tataii v. Cronin, 119 Hawaii 337, 339, 198 P.3d 124,126 (2008) (“A complaint challenging the results of [an] election pursuant to HRS § 11-172 fails to state a claim unless the plaintiffs demonstrate errors that would change the outcome of the election[.]”); Funakoshi v. King, 65 Haw. 312, 317, 651 P.2d912, 915 (1982)(“‘Difference in the election results’ . . .mean[s] a difference sufficient to overturn the nomination of anyparticular candidate or candidates in the primary.”).

Based upon the foregoing findings of fact and conclusions of law, judgment is entered dismissing the election contest complaint.”Hawaii State Supreme Court

“Today, the Hawaii Supreme Court reached the right result in all three challenges to Hawaii’s primary election,” said Attorney General Louie in a media release. “These decisions bring closure and finality to our primary election. The candidates and Hawaii’s voters can now look forward to the general election knowing that the results of the primary election are sound and not subject to any further challenge.”