Lava is about a week away from Kaohe Homesteads if it continues to advance at its current rate and direction.

PAHOA, Hawaii – Lava is about a week away from Kaohe Homesteads if it continues to advance at its current rate and direction, officials estimate. The official threat level to the private subdivision near Pahoa town in Puna could be elevated in less than two days.

Officials made the statements during a community meeting in Pahoa on Tuesday night. It was the fifth public meeting held by Hawaii County Civil Defense and USGS HVO. Last night, the venue was changed to Pahoa High School. The gathering afforded residents another opportunity to ask all sorts of question relating to evacuation, communication and geology. 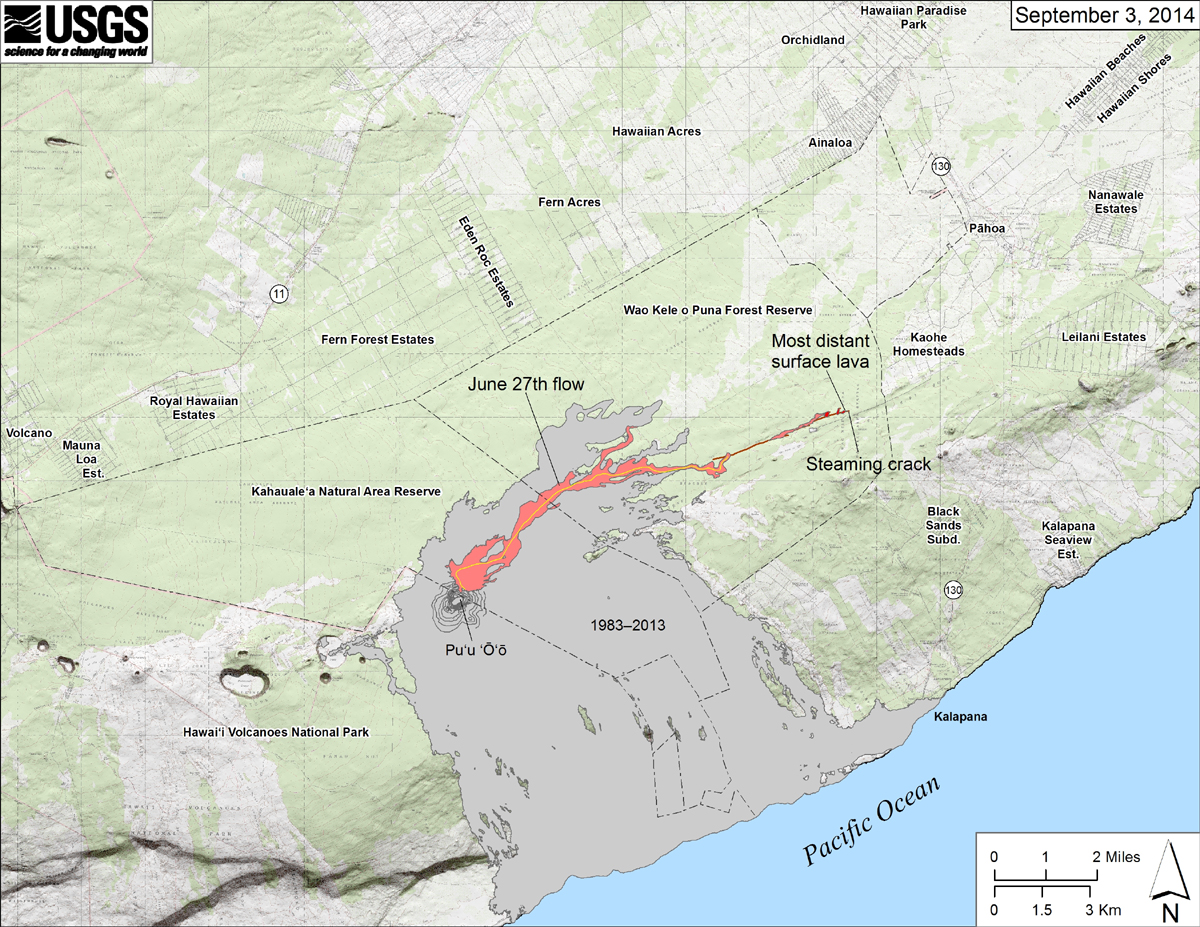 USGS HVO: “Map showing the June 27th flow in Kīlauea’s East Rift Zone as of September 3, 2014. The area of the flow as mapped on September 1 is shown in pink, while widening and advancement of the flow as of September 3 is shown in red. Last night, lava welled up out of the crack it was filling and spilled out onto the ground to feed new surface flows. As of early afternoon today (September 3), lava on the surface was 13.2 km (8.2 miles) from the vent and 1.3 km (0.8 miles) from the east boundary of the Wao Kele o Puna Forest Reserve. All older lava flows (1983–2014) are shown in gray; the yellow line marks the lava tube.” 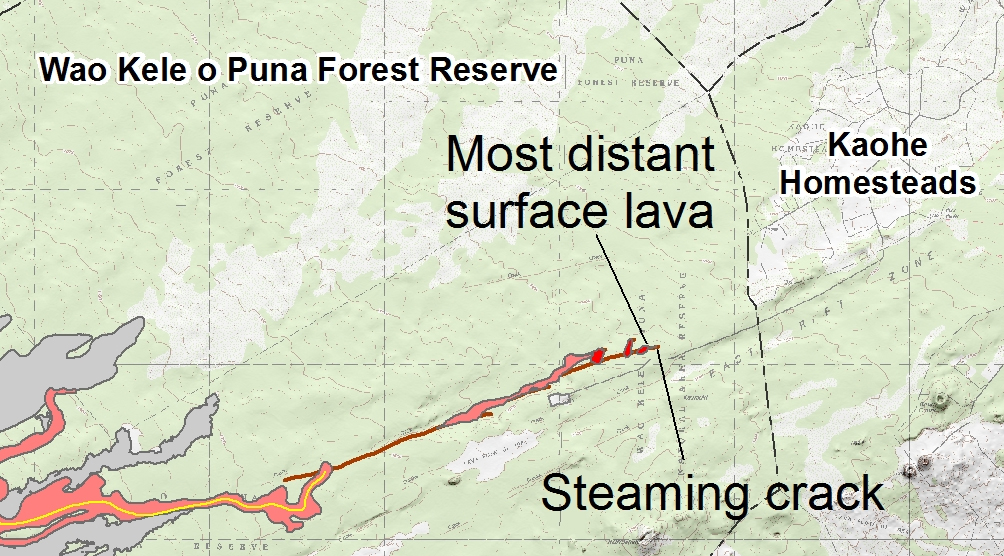 Inset of the Sept. 3, 2014 USGS Hawaiian Volcano Observatory map showing a closer look at the lava and its approach towards Kaohe. 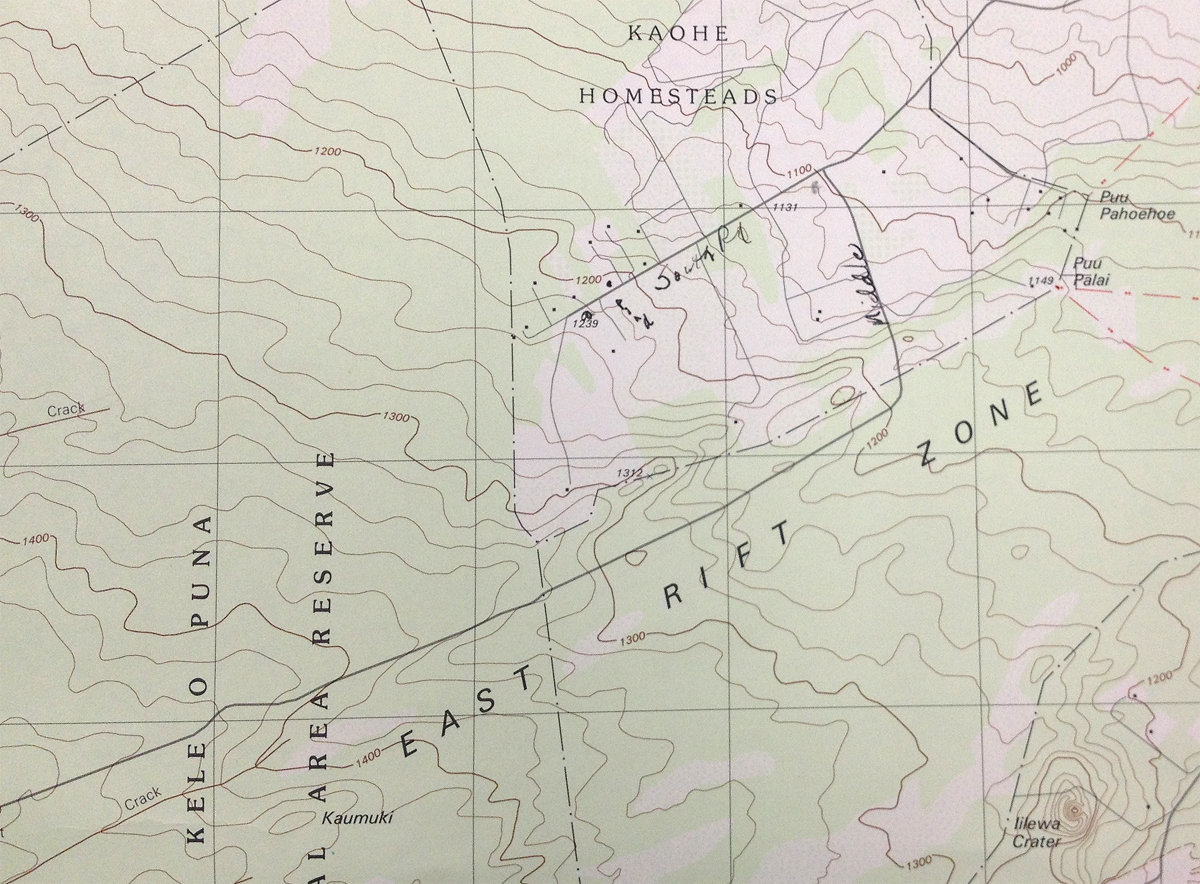 Here is another USGS map that a resident brought with them to Tuesday’s meeting. It may provide a closer look at the topography around the Kaohe Homesteads.

No good news this morning. Scientists posted this update to the HVO website:

The June 27th lava flow remains active. A Civil Defense overflight this morning observed lava issuing onto the surface from the steaming ground crack, and moving slowly through thick forest. They reported that the most distant active lava was approximately 13.2 km (8.2 miles) from the vent and 1.3 km (0.8 miles) from the eastern boundary of the Wao Kele o Puna Forest Reserve. The farthest steaming ground crack was 1.1 km (0.7 miles) from the boundary. An HVO overflight is scheduled for this afternoon and an updated map will be posted later today.

Small breakouts also remain active closer to Puʻu ʻŌʻō, roughly midway along the length of the June 27th flow. None of these breakouts were very vigorous when observed on Monday’s overflight, and there was no significant change overnight based on webcam views. Some of these breakouts are also creeping into the forest and producing smoke plumes.USGS Hawaiian Volcano Observatory on September 3, 2014

Stay tuned for a series of video stories covering this meeting. Topics will include information specific to Kaohe, livestock evacuation and sheltering, and even a discussion of lava diversion tactics (talk of which got a rise out of the crowd).