As lava approaches, some are expressing concern over how the flow will impact geothermal wells and power plants.

PAHOA, Hawaii – As lava approaches Puna’s populated areas, some are expressing concern over how the flow will impact existing geothermal wells and power plants.

Puna Geothermal Venture’s senior director of Hawaiian affairs, Mike Kaleikini, has found himself talking often about the Pohoiki power plant’s plan to move potentially hazardous chemicals (like the 60,000 gallons of pentane) out of the way of any lava that might come their way.

But PGV is in Pohoiki and is far removed from the pending lava threat. Of more immediate concern are the plugged geothermal wells closer to the June 27 lava flow.

On Tuesday, Hawaii County Civil Defense administrator Darryl Oliveira assured the audience gathered at a public meeting in Pahoa that the KA1-1 Geothermal Well in the Wao Kele O Puna Forest Reserve should not present an added danger if lava should come in contact with it.

Oliveira refereed to a summary report prepared for the Department of Land and Natural Resources, which contracted with Oceanit to plug the geothermal well (as well as a second well in Puna, known as SOH-4.)

The KA1-1 Geothermal Well site is located in the Wao Kele o Puna Forest, Puna District on the island of Hawaii. Located on the Kilauea East Rift, the site is in a volcanically active region and was hoped to be very promising for geothermal development. The Wao Kele o Puna Forest is also an important cultural and biological resource. In 1981 plans began to develop a site for a geothermal power plant. The KA1-1 geothermal exploratory well was finished in 1990. In addition a dug drilling water storage reservoir was constructed on site. Due to the site’s location in a precious native forest there was intense controversy. The plans to use the KA1-1 geothermal well for power never advanced and there was no further development. In 2006 the Office of Hawaiian Affairs (OHA) acquired the 25,856-acre Wao Kele o Puna forest which included the KA1-1 geothermal well site. The geothermal well has been successfully plugged and the drilling water reservoir has been graded into a safe condition.

The aim of this project was to plug KA1-1 and partially restore the well site to its original condition prior to their construction. Natural vegetation will be allowed to gradually recolonize the site. Prior to construction the KA1-1 site consisted of: 6.5 acres of cleared and graded land; a geothermal well 7850 feet deep, located in the northwestern section of the lot; a concrete cellar to house the well; and a 200 foot by 200 foot reservoir lined with plastic, located in the southeastern section of the site.

The KA1-1 reservoir was filled using onsite material. The ground elevation of the graded surface above the plugged well is 1603 feet MSL. The site was graded to more shallow slopes and the displaced material was used to fill the reservoir. After grading the all graded areas were protected from erosion by installing biodegradable coconut fiber mats. The KA1-1 geothermal well was plugged with 14 layers of cement plugs starting at 5091 feet. Sand was used in between the cement plugs to help the plugs set in place. The concrete cellar was demolished, removed and filled with onsite soil up to the existing grade.Summary Report, KA1-1 & SOH-4 Geothermal Well Sites in Sept. 2010 (by Oceanit for DLNR) 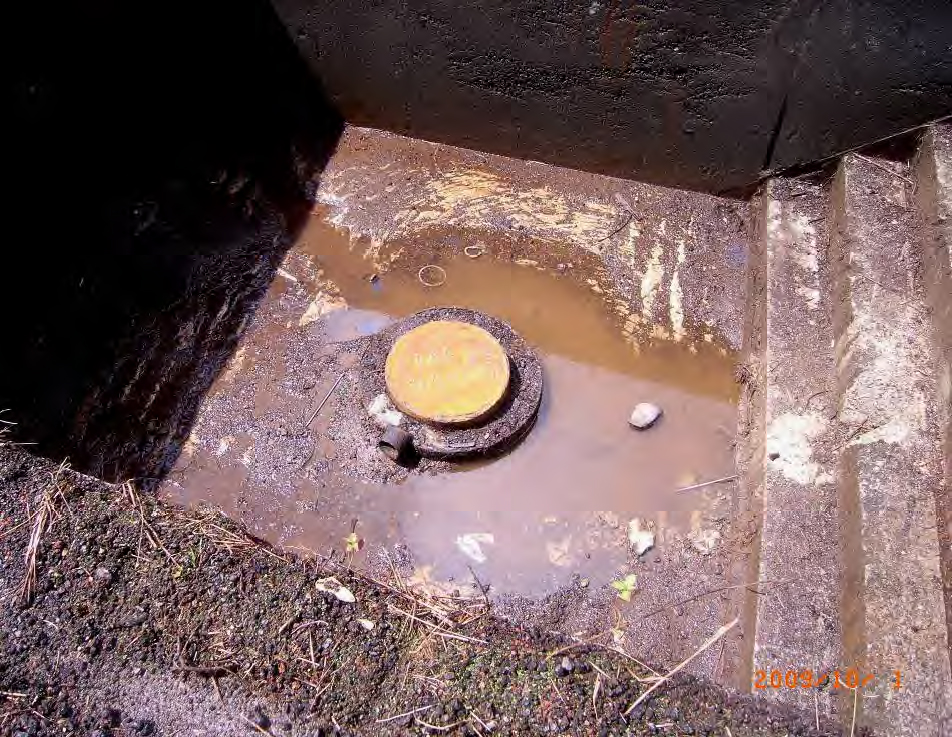 The well site is visible in the USGS Hawaiian Volcano Observatory photos of the June 27 lava flow. 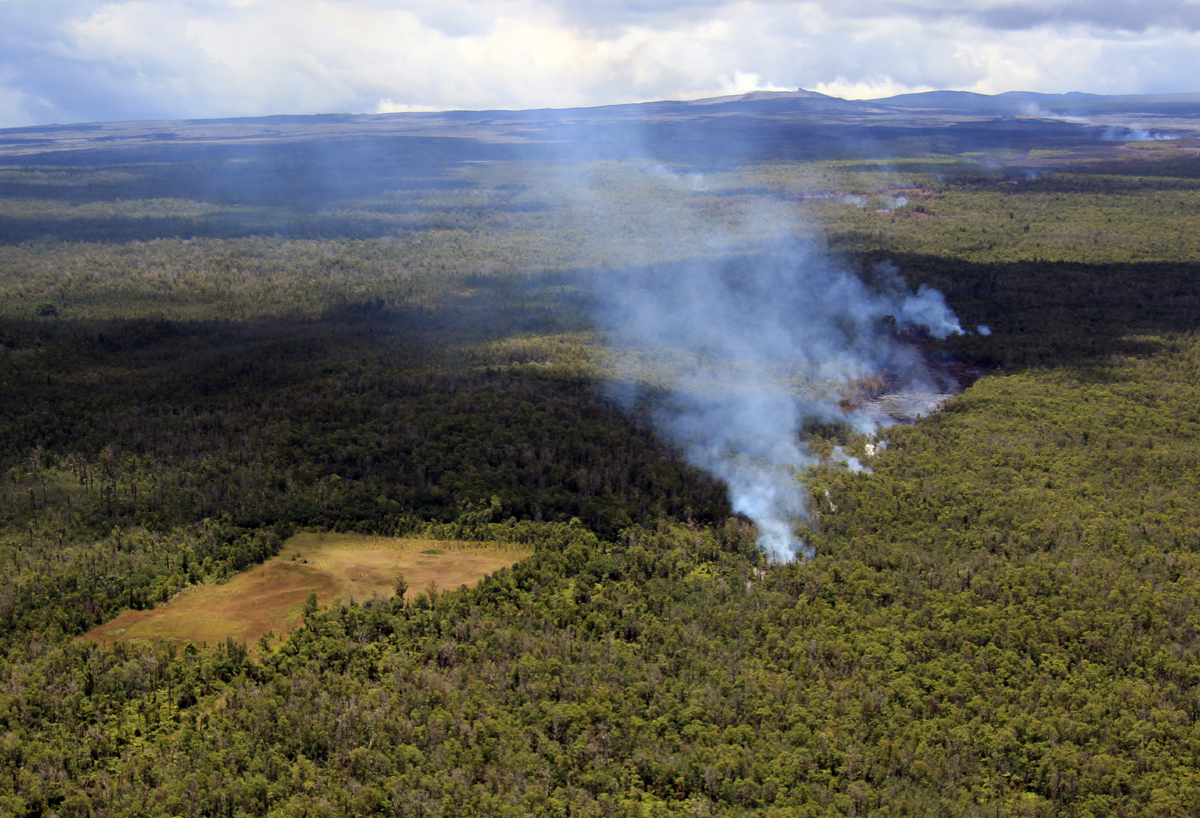 Earlier in the week, we received these photos of the site taken by Sierra Club volunteer leader Nelson Ho in April 1990, while flying in a single engine plane over Kahaualea Forest. At the time the land was owned by Campbell Estate. 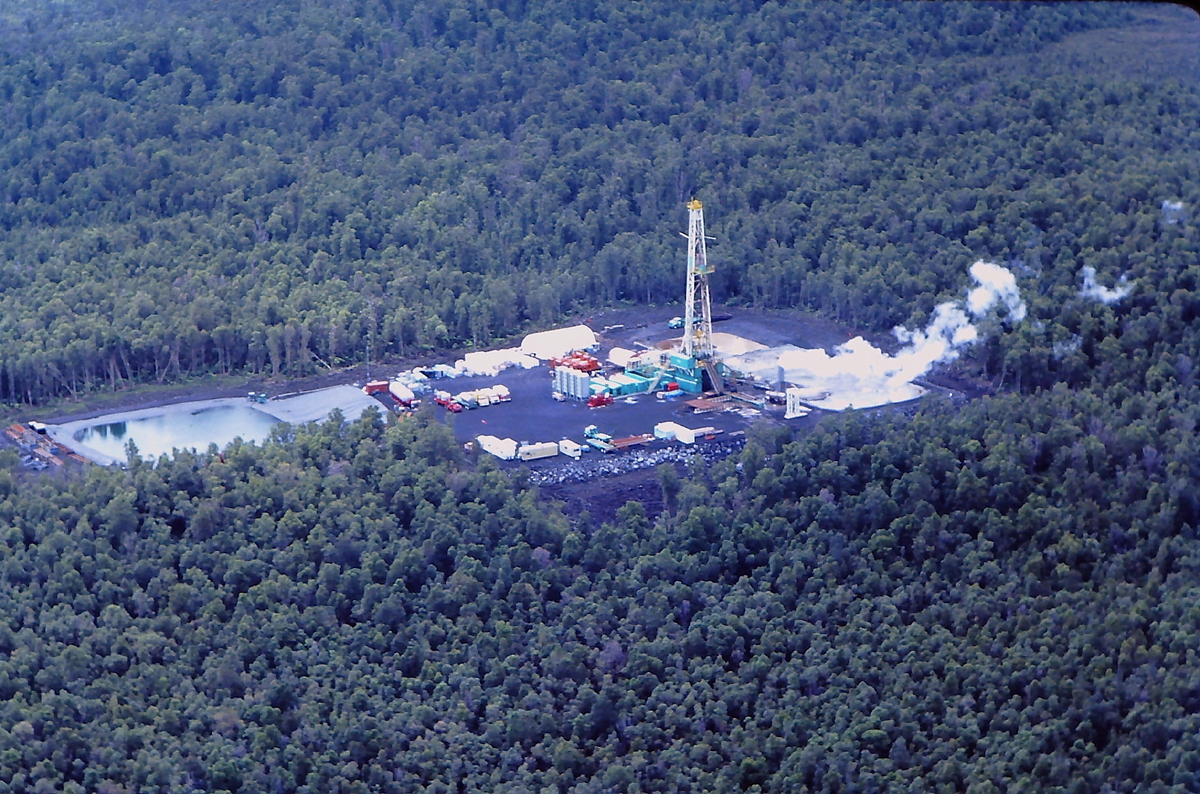 “These photos depict the significant industrial impacts of geothermal exploration, and now the vulnerability of such activities to volcanic hazards,” Ho wrote in his message. “The original well field and geothermal facilities proposed by Campbell Estate in 1982, are now buried under 300′ or more of lava, and the volcanic edifice of Puu O’o.”