PUNA, Hawaii – The June 27 lava flow continues its march towards Puna’s populated areas. Surface flows increased on Saturday following a day of reduced activity. The active flow was 0.9 miles from the eastern boundary of the Wao Kele o Puna forest reserve, which is also the western edge of Kaohe Homesteads subdivision.

According to USGS Hawaiian Volcano Observatory, “the reduction yesterday was likely due to lava filling the deep ground cracks. The flow front today was moving towards the north from the ground crack, through thick forest, creating a dense plume of smoke.” 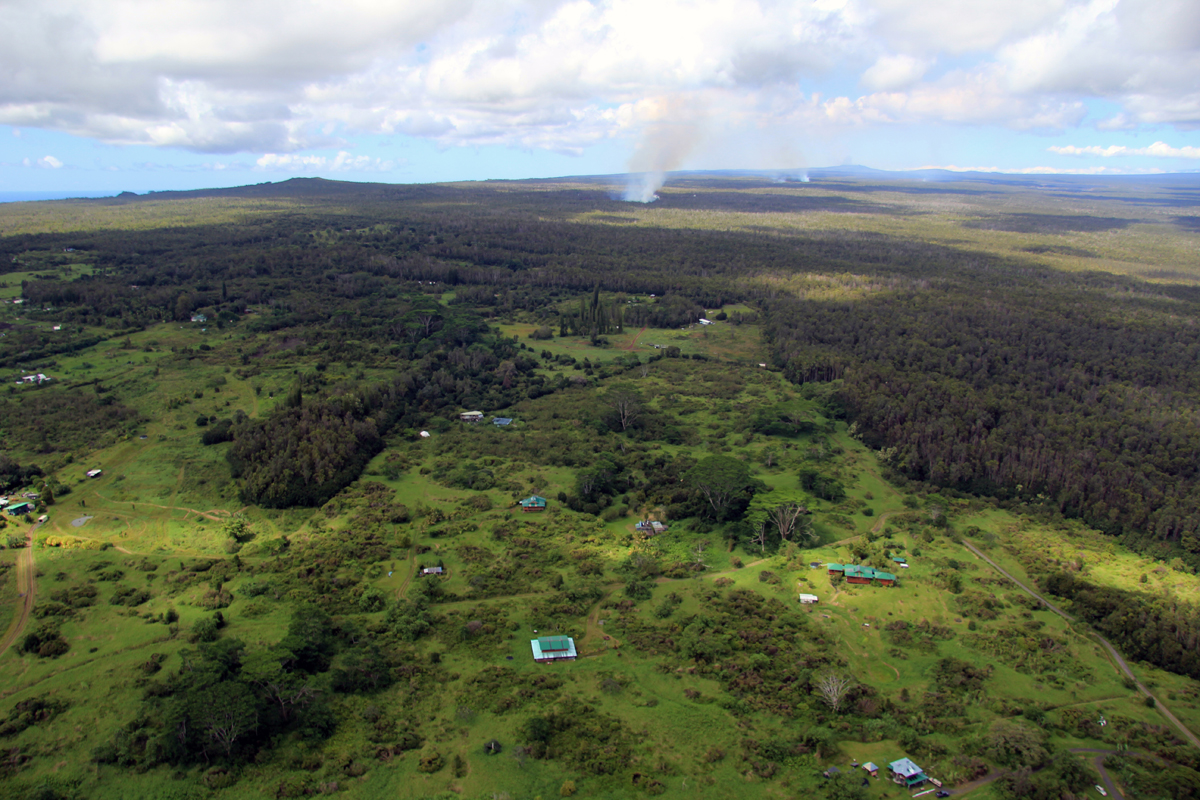 Kaohe Homesteads subdivision is seen at the bottom of this photograph. Puʻu ʻŌʻō is visible on the horizon in the upper right portion of the photograph. The flow is the smoke near the horizon. (USGS HVO) 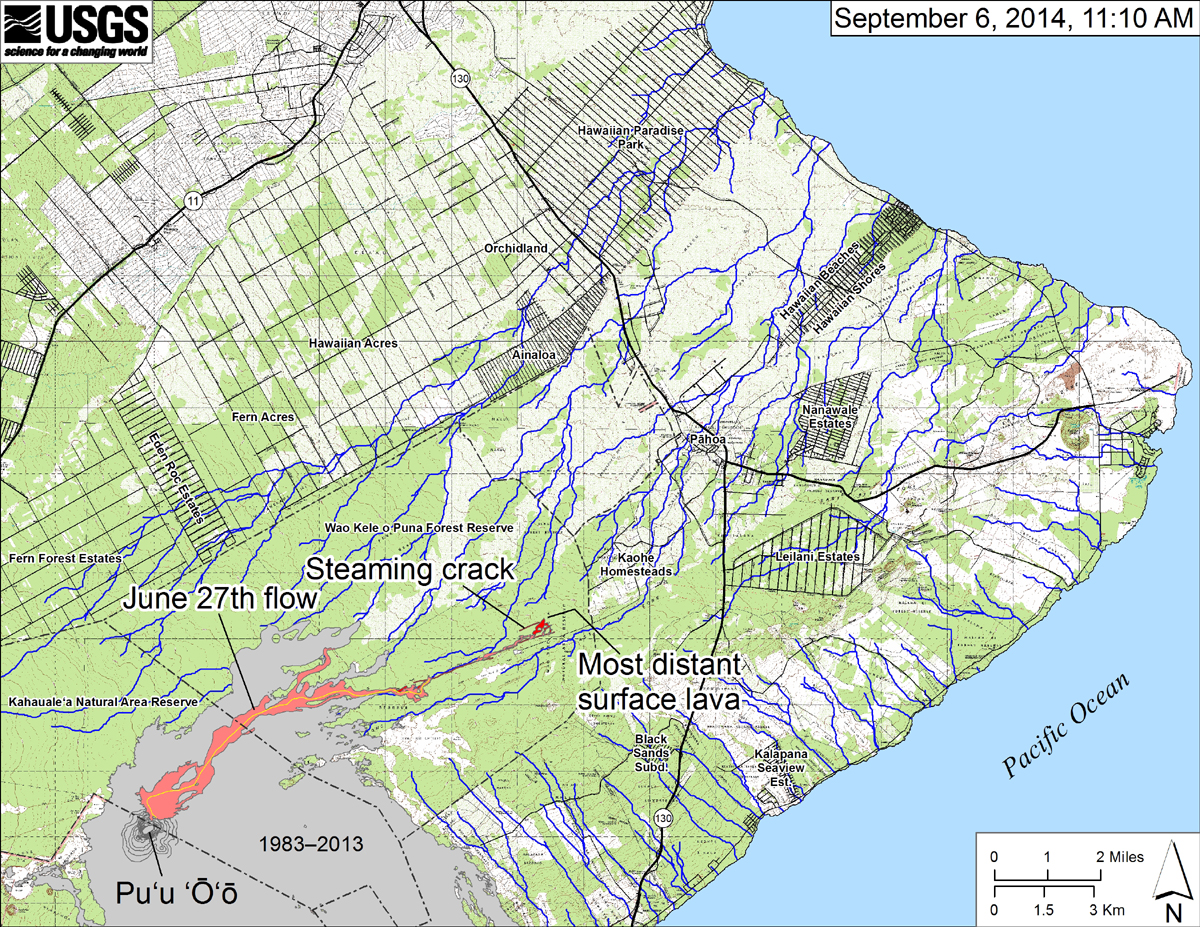 According to USGS HVO: “This small-scale map shows the June 27th flow in Kīlauea’s East Rift Zone as of September 6, 2014. The area of the flow on September 3 is shown in pink, while widening and advancement of the flow as mapped on September 6 at ~11:10 AM is shown in red. The front of the active flow was 13.2 km (8.2 miles) from the vent and 1.4 km (0.9 miles) from the east boundary of the Wao Kele o Puna Forest Reserve, and was advancing toward the north, roughly parallel to the Forest Reserve boundary. The blue lines show down-slope paths calculated from a 1983 digital elevation model (DEM). For an explanation of down-slope path calculations, see: http://pubs.usgs.gov/of/2007/1264/. All older Puʻu ʻŌʻō lava flows (1983–2014) are shown in gray; the yellow line marks the lava tube.” USGS HVO says, “This large-scale map shows the distal part of the June 27th flow in relation to nearby Puna communities. The area of the flow on September 3 is shown in pink, while widening and advancement of the flow as mapped on September 6 at ~11:10 AM is shown in red. The black dots mark the flow front on specific dates. September 6 point Lat/Lon position: 19.448003/-154.992676 Decimal Degrees; WGS84. The blue lines show down-slope paths calculated from a 1983 digital elevation model (DEM; for calculation details, see http://pubs.usgs.gov/of/2007/1264/).” 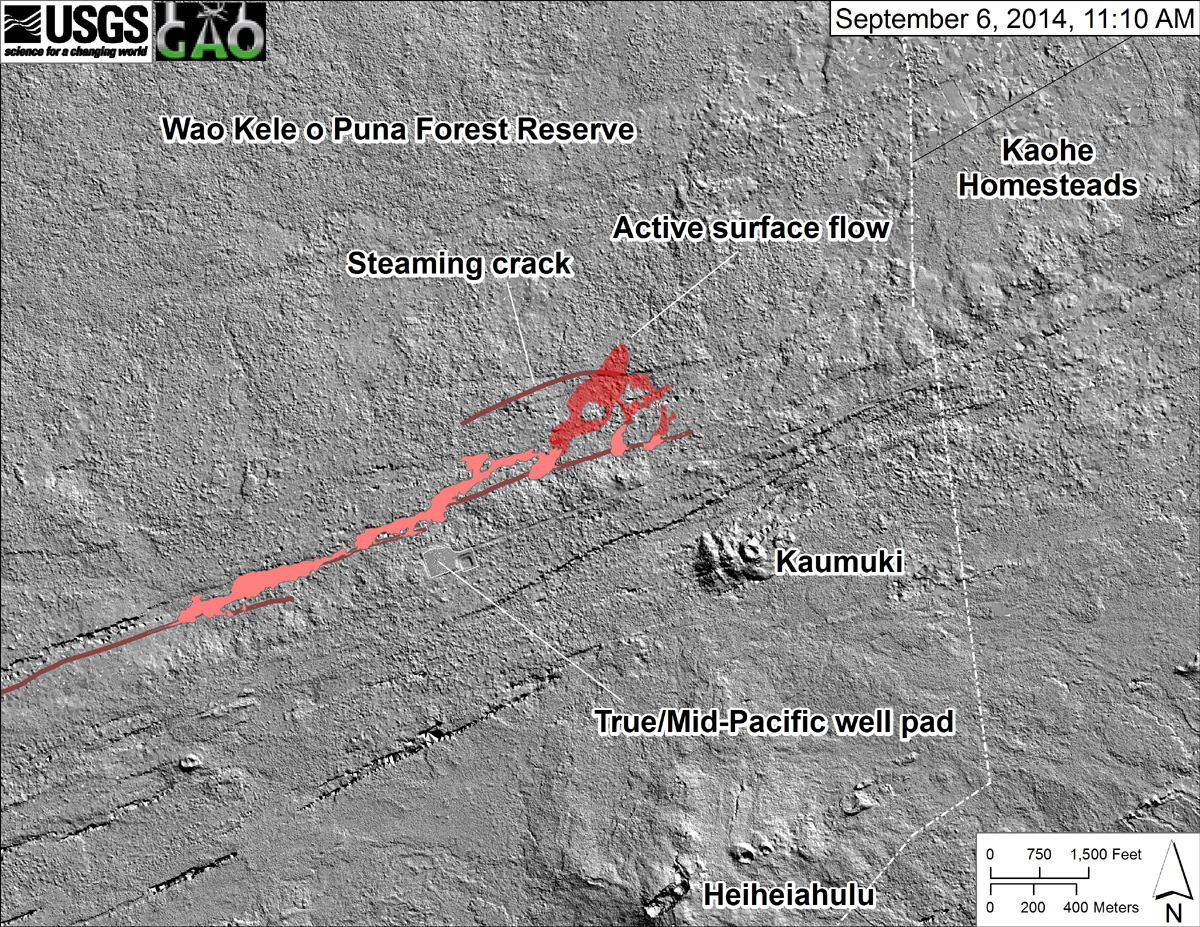 USGS HVO says, “This shaded-relief map, courtesy of the Carnegie Airborne Observatory, shows some of the cracks, faults, and grabens (down-dropped blocks between adjacent faults; http://earthquake.usgs.gov/learn/glossary/?term=graben) that are present in Kīlauea’s East Rift Zone, and which are partly controlling the June 27th flow’s advance direction. They are not old lava channels. The June 27th flow as of September 3 is shown in pink, while flow advance since then (as of ~11:10 AM on September 6) is partly transparent and shown in red. At the time of the mapping, the flow had mostly filled a ground crack (which extended to the west and was steaming) and was advancing toward the north.”

Helicopter over flights and assessments are continuing. This morning’s assessment shows the surface lava flow continues very slowly in a north direction. Very little vegetation is burning and there is no wildfire threat at this time. The surface flow has advanced approximately 50 yards since yesterday. The presence of steam plumes being emitted from the crack system indicates subsurface flow activity continues. The surface flow is moving very slowly and does not pose an immediate threat to area residents. The surface flow is located approximately .8 miles southwest or upslope of the Wao Kele Puna Forest Reserve boundary and moving in a north direction.

Due to the proximity of the lava flow activity to the nearby residential areas, the Hawaii Volcanoes Observatory has elevated the eruption alert level to an Eruption Warning as of Thursday September 4th. Presently, the current activities and flow does not present with an immediate or imminent threat to area communities. No evacuation is required at this time. Eruption activity will continue to be monitored and additional updates will be provided.

The public is reminded that the flow cannot be accessed and is not visible from any public areas. Access to the Kaohe Homesteads subdivision will be restricted and limited to subdivision residents only. Hawaii County Civil Defense on Sept. 6, 2014 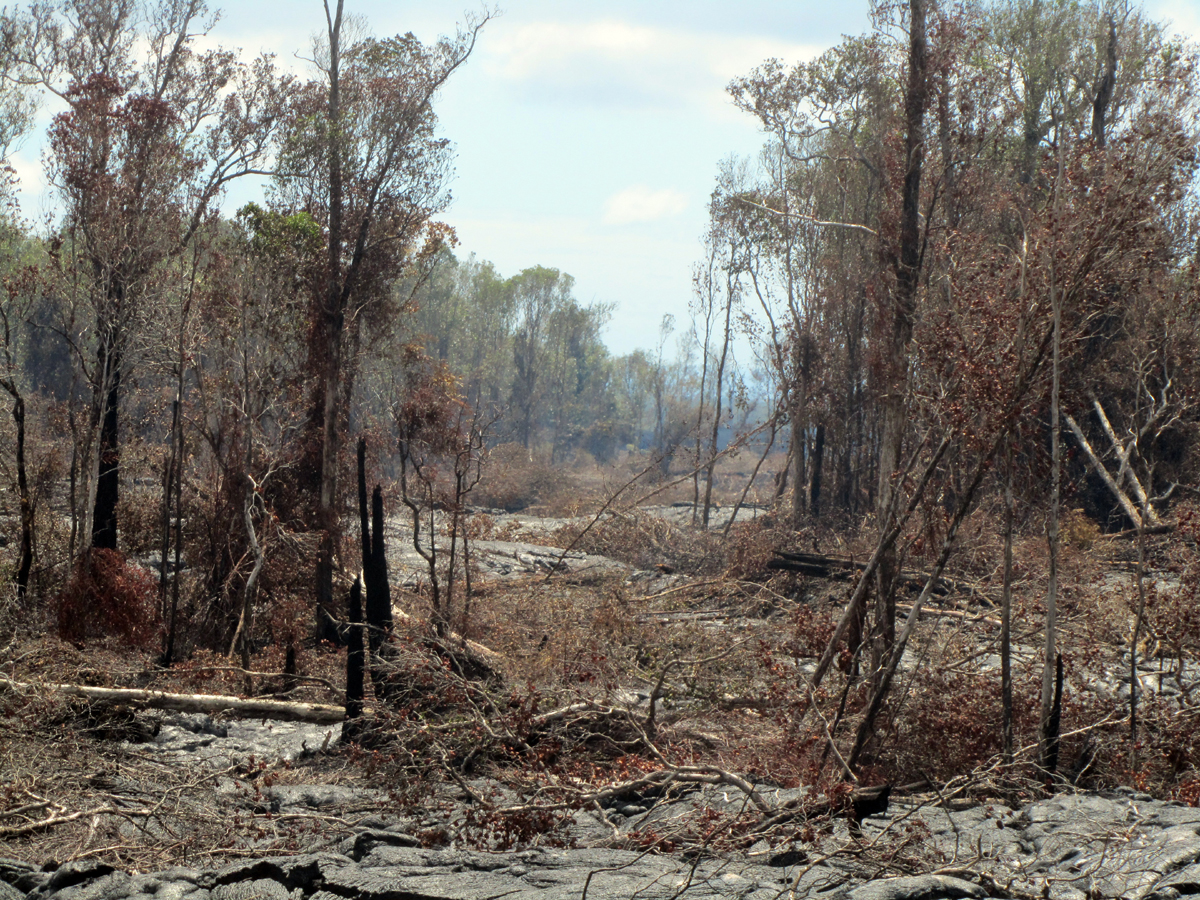 Breakouts remain scattered along the June 27th lava flow, and are not just limited to the flow front. Here surface flows have recently cut a swath through thick forest. (USGS HVO) 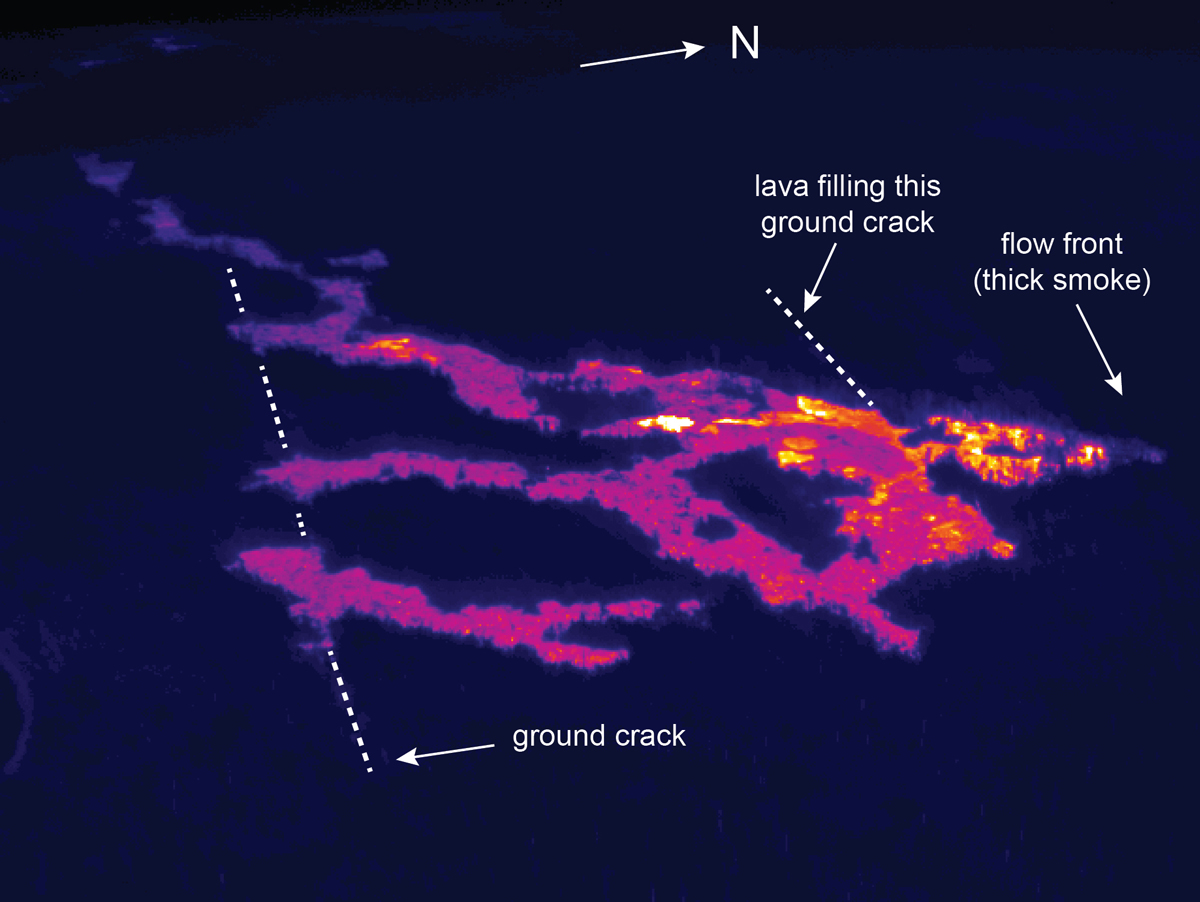 This thermal image looks west at the June 27th flow front. The active tip of the flow is at the right side of the image, moving north. Lava issued from several spots along a deep ground crack, which has been traced with the dotted line in the left portion of the image. In addition, lava was filling another crack, also marked, closer to the active tip of the flow. (USGS HVO)