New aerial video taken above a threatening lava flow on Hawaii Island illustrates the size of the destructive flow.

(ABOVE VIDEO) Raw video of the lava flow by Mick Kalber of Tropical Visions Video aboard Paradise Helicopters, captured during the evening “magic hour” on September 8.

PUNA, Hawaii – New aerial video taken above a threatening lava flow on Hawaii Island illustrates the size of the destructive volcanic activity, and its relative distance to nearby homes.

The footage was captured by noted vulcanographer Mick Kalber of Tropical Visions Video aboard Paradise Helicopters. It was taken during the evening “magic hour” on September 8, which means the images of red hot, molten rock and fire stand out in the dark forest below.

The video captures the creeping flow front (it’s moved about 1,300 feet per day over the last few days), burning trees in the Wao Kele o Puna Forest Reserve. The video also shows how close the steaming lava is to the Kaohe Homesteads subdivision. The lava was last measured at 0.7 miles from the Forest Reserve boundary, which is where the subdivision begins. Kalber observed “three flow fingers extending east, after two days of northern flow to once again threaten the community”. 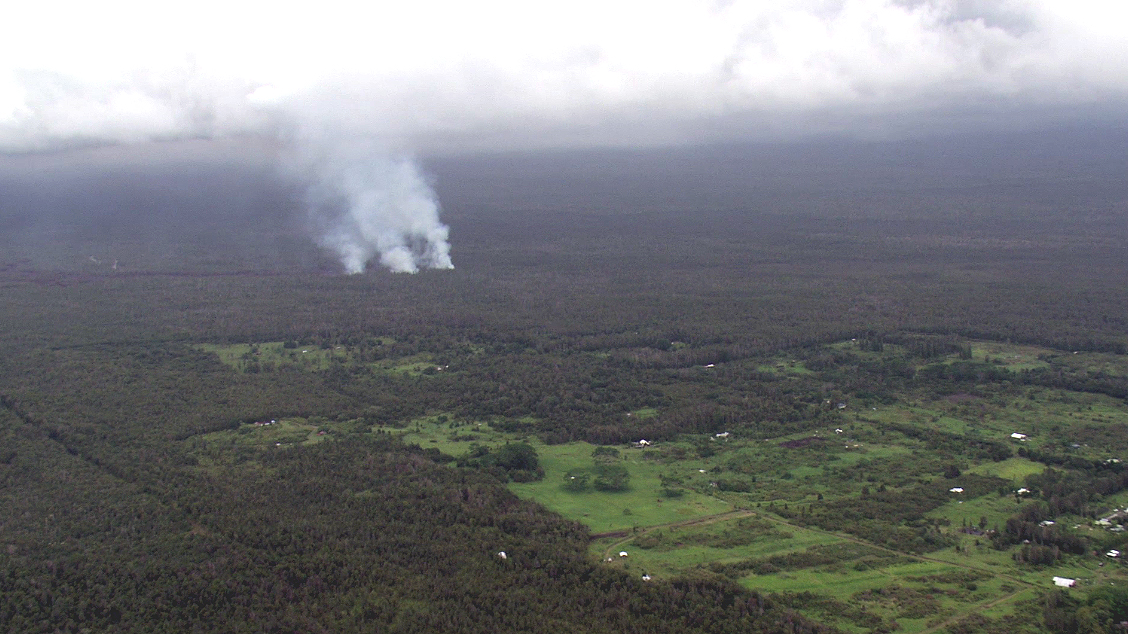 Still image from Kalber’s video shows the distance of the lava flow to Kaohe Homesteads (Sept. 8)

The USGS Hawaiian Volcano Observatory published the most recent update on the lava flow at 9:44 a.m., hours after Kalber’s observations.

The June 27th lava flow remains active. An HVO flight early in the afternoon yesterday found that the flow had advanced ~280 m (~300 yards) north since a Civil Defense flight just after sunrise that morning (a span of ~6 hours), and the flow front had reached a large crack marked on the topographic base map (but not visible from the air). There was no evidence that the flow was entering this crack, if it exists.

A Civil Defense overflight this morning found that the flow front had advanced an additional 370 meters (400 yards) since yesterday afternoon. This puts the tip of the flow at 14.0 km (8.7 miles) from the vent, measured in a straight line, and 1.1 km (0.7 miles) from the Forest Reserve boundary. The actual length of the flow, measured along the lava tube axis (so that bends in the flow are considered) is 16.0 km (9.9 miles). The flow front is still in thick forest, creating smoke plumes as it engulfs trees and other vegetation, but fires are not spreading away from the flow.

Small breakouts also remain active closer to Puʻu ʻŌʻō, roughly midway along the length of the June 27th flow. None of these breakouts have been very vigorous recently, but are also producing smoke plumes a they creep into the adjacent forest.USGS Hawaiian Volcano Observatory on Sept. 9

Kalber’s video also shows the plume of smoke following the burning lava flow. The State Department of Health recently issued an advisory on the smoke downwind of the flow.

The Hawaii State Department of Health (DOH) is advising Hawaii Island residents living near the lava flow in Puna that began on June 27 to plan ahead for potential smoke exposure from burning vegetation and low levels of sulfur dioxide. The smoke effect on nearby communities will vary largely depending on unpredictable wind and weather conditions.

Smoke contains a mixture of gases and fine particles that may trigger adverse respiratory conditions. Additionally, encroaching lava may contain low levels of sulfur dioxide, an irritant gas emitted by the Kilauea Volcano.

DOH recommends that residents in smoke affected areas avoid outdoor activities or physical exertion. People with respiratory illness or heart disease, older adults and children are urged to avoid smoke exposure. Smoke may worsen symptoms for individuals who have pre-existing respiratory conditions, such as allergies, asthma, and chronic obstructive pulmonary disease (COPD). Individuals that have these conditions should keep their medication refilled and use daily (controller) medication as prescribed. Anyone who feels they may need medication or medical attention should contact their physician.DOH, Sept. 5 media release