Over the last few days, the front of the June 27 lava flow moved over the eastern boundary of the Wao Kele o Puna Forest Reserve and onto a parcel owned by the state, according to Civil Defense, which means the flow front is still on state lands. It is heading towards additional vacant parcels in Kaohe.

We interviewed Civil Defense head Darryl Oliveira to get the latest on the lava flow, from the new Incident Command Center installed at the Pahoa Community Center. An adjacent building contained an area for the public to ask questions and interface with county officials. That’s where we found this September 15 map tracking the flow. 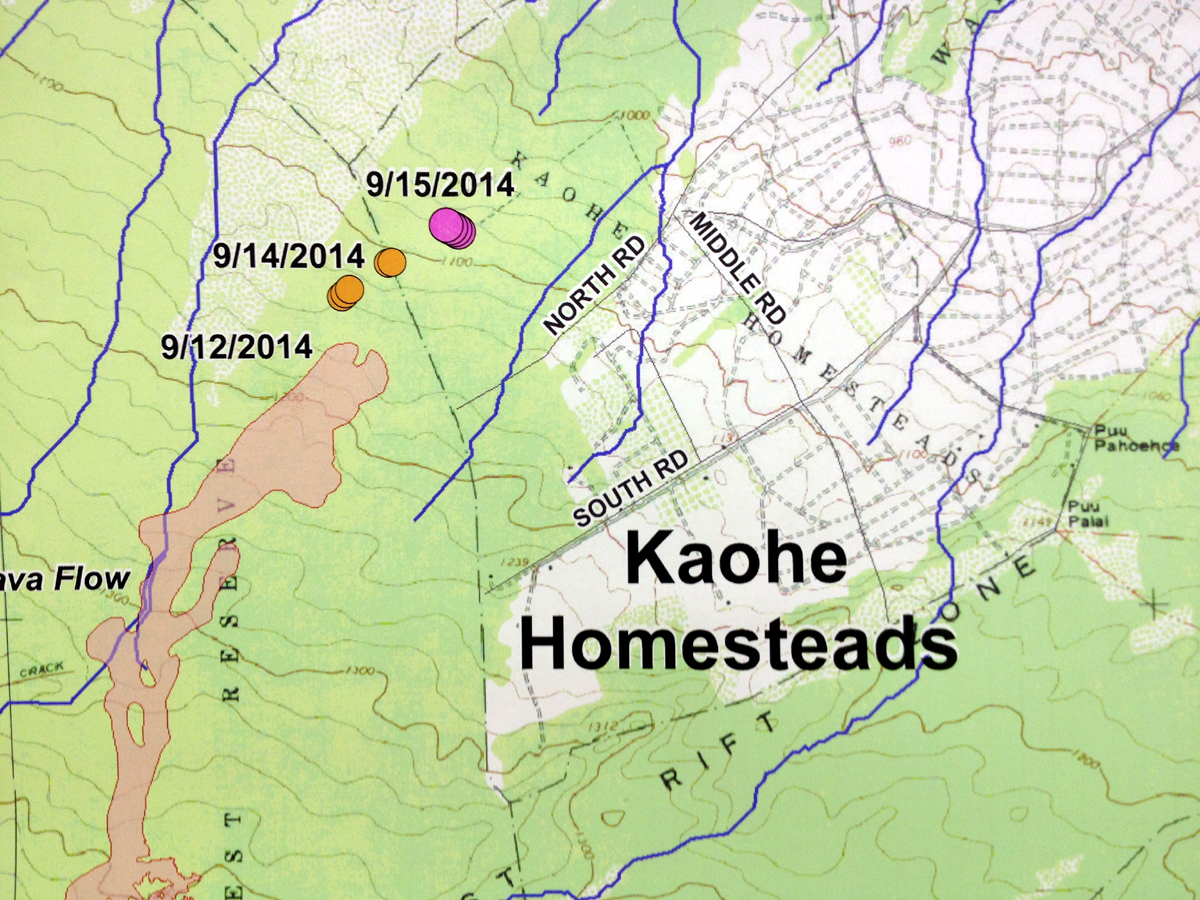 An image of a Hawaii County produced map showing today’s location of the lava flow front, inside Kaohe subdivision.

The USGS would later confirm the position of the lava with an update of their own.

Between September 12 and 15, the June 27th flow widened and advanced north-northeastward at an average rate of 215 m/day (705 ft/day). By the afternoon of September 15, the flow had advanced approximately 15.5 km (9.6 mi) straight-line distance from the vent and 280 m (920 ft) inside the vacant, forested northwest portion of Kaohe Homesteads. At the average rate of advancement of 215 m/day (705 ft/day) since September 12, we project that lava could flow from its current location to Apa`a Rd in 15 days and to the Pāhoa Village Road (government road) in Pāhoa within 20 days. These estimates will be continually refined as we track this lava flow. USGS Hawaiian Volcano Observatory 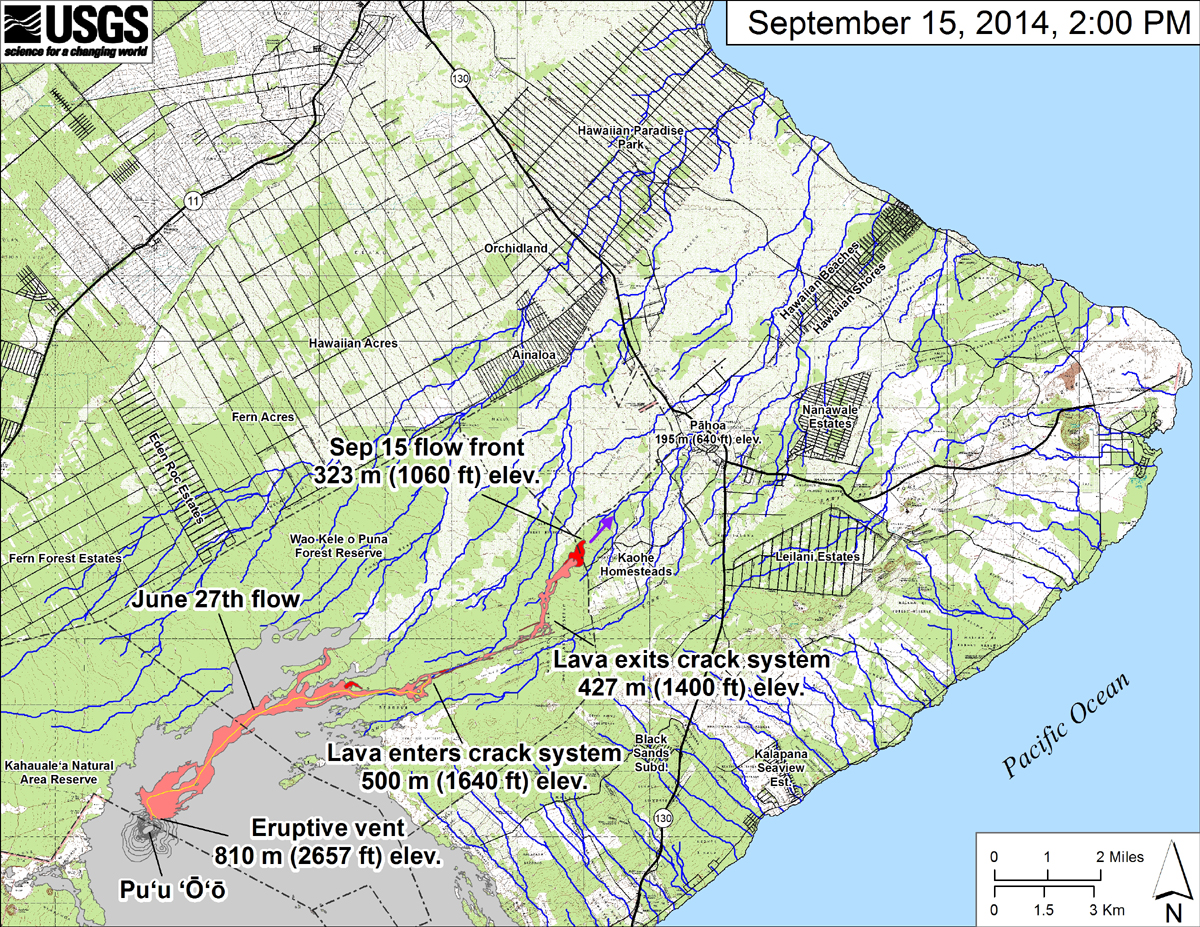 USGS: “This small-scale map shows the June 27th flow in Kīlauea’s East Rift Zone in relation to lower Puna. The area of the flow on September 12, 2014, at 12:30 PM is shown in pink, while widening and advancement of the flow as mapped on September 15 at 2:00 PM is shown in red. The front of the active flow was 15.5 km (9.6 miles; straight-line distance) from the vent and had crossed the Wao Kele o Puna Forest Reserve boundary into the vacant northwest corner of Kaohe Homesteads. The flow front was advancing toward the northeast and was 4.3 km (2.7 miles) upslope from Pāhoa Village Road. The actual length of the flow, measured along the lava tube axis (so that bends in the flow are considered) is 17.7 km (11.0 miles). The blue lines show down-slope paths calculated from a 1983 digital elevation model (DEM). The purple arrow shows a short term projection of flow direction based on the flow behavior over the past several days and the local topography.” 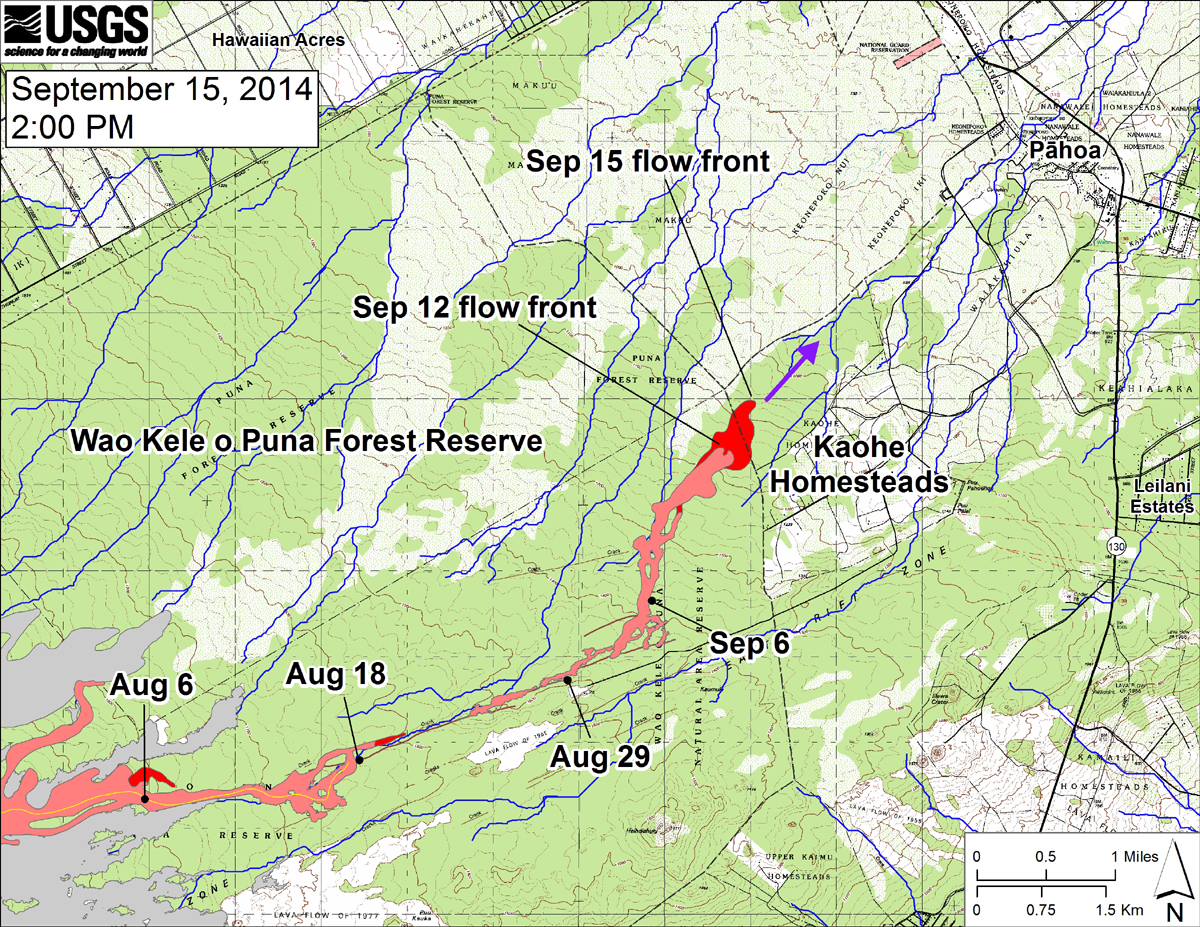 USGS: “This large-scale map shows the distal part of the June 27th flow in relation to nearby Puna communities. The black dots mark the flow front on specific dates. The latitude and longitude of the flow front on September 15 was 19.469506 /-154.981172 (Decimal degrees; WGS84). The blue lines show down-slope paths calculated from a 1983 digital elevation model (DEM; for calculation details, see http://pubs.usgs.gov/of/2007/1264/). Down-slope path analysis is based on the assumption that the digital elevation model (DEM) perfectly represents the earth’s surface. But, DEMs are not perfect, so the blue lines on this map indicate approximate flow path directions. The purple arrow shows a short term projection of flow direction based on the flow behavior over the past several days and the local topography.”