A lava breakout several hundred yards upslope has moved 110 yards into forest along the north edge of the flow.

The people of Puna are in the mood to celebrate the current slow down of the lava flow, judging by comments left on our website and Facebook page, but government officials continue to warn that the flow is still very much active.

This morning’s assessment shows the surface lava flow has remained slow and has not advanced since yesterday. The flow front is approximately 100 yards wide and again very little activity noted this morning. A small breakout flow upslope from the leading edge along the north flank continues and is moving in a northeast direction.

The brush fire that had been started by the lava flow this past Saturday has been contained and there is no active burning this morning.

The public is reminded that the flow is not visible and cannot be accessed from any public areas. Access to the Kaohe Homesteads subdivision will remain restricted to area residents only.Hawaii County Civil Defense on Sept. 23, 2014

A Civil Defense overflight this morning confirmed little to no change at the front of the June 27th lava flow. Surface lava, however, remains active several hundred meters (yards) upslope, where a breakout was advancing into forest along the north edge of the flow. This breakout advanced about 100 m (110 yards) since yesterday morning and was moving in a northeasterly direction.

Breakouts also remain active closer to Puʻu ʻŌʻō, roughly midway along the length of the June 27th flow. None of these breakouts by itself has been very vigorous, but together they compose a significant portion of the total flow volume. Some of these breakouts are also producing smoke plumes as they creep into the forest along both the north and south edges of the flow.USGS Hawaiian Volcano Observatory on Sept. 23, 2014 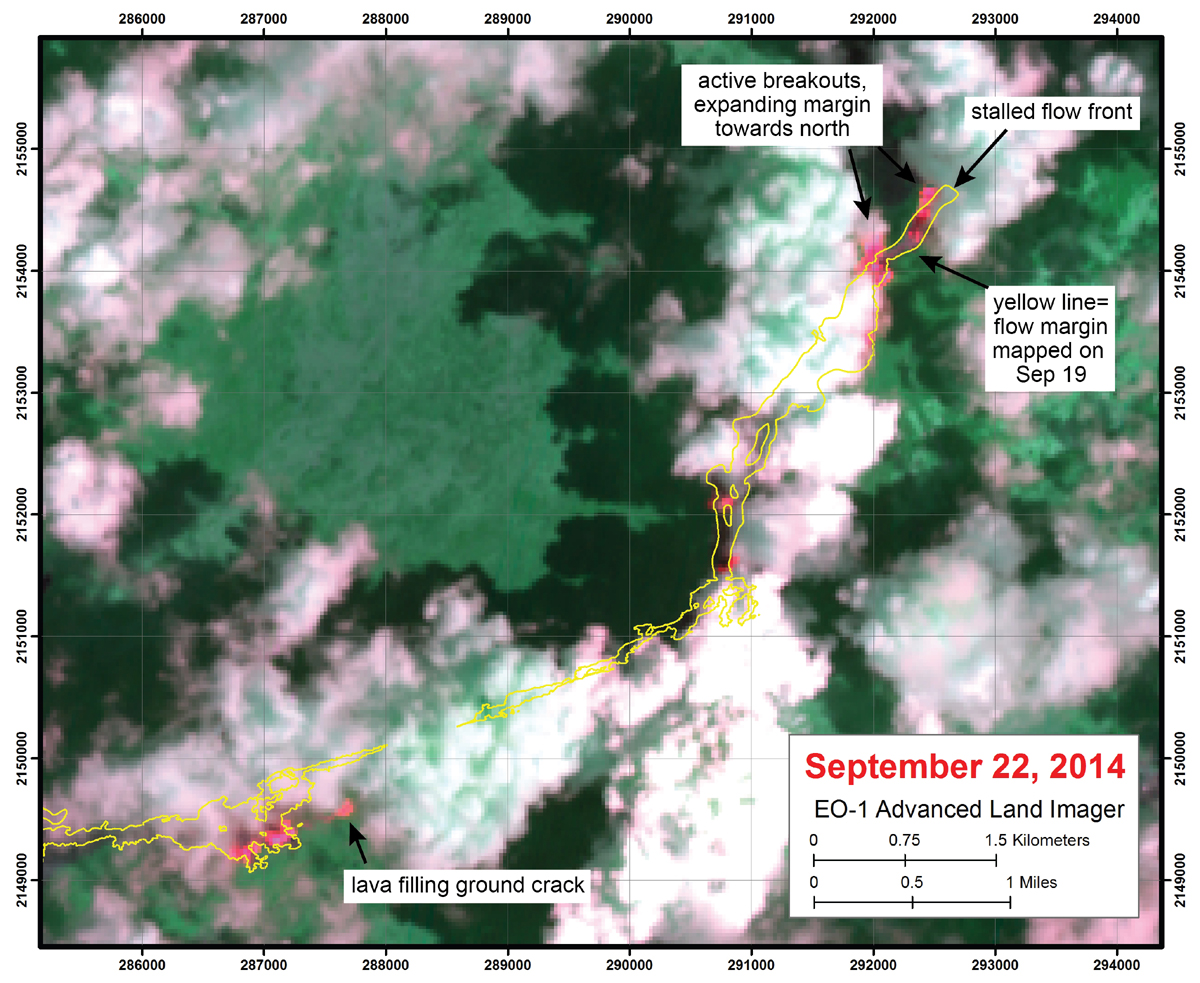 Courtesy USGS HVO: This satellite image was captured by the Advanced Land Imager instrument onboard NASA’s Earth Observing 1 satellite. Although this is a false-color image, the color map has been chosen to mimic what the human eye would expect to see. Bright red pixels depict areas of very high temperatures, and show active lava. White areas are clouds. This image shows an example of the satellite data USGS uses to augment field observations, “but also shows one of the major limitations of satellite data – clouds.”