Activity has resumed along the edges of the leading surface lava flow.

(ABOVE PHOTO) A lobe of pāhoehoe on the June 27th lava flow, taken by USGS Hawaiian Volcano Observatory staff and posted to the HVO website on September 24

Steady inflationary tilt was recorded at the summit over the past 24 hours, USGS scientists say, and the volume of lava going to the flow is expected to increase accordingly. Already, increased activity has been observed and the stalled flow front is once again beginning to move forward.

This morning’s assessment shows some activity has resumed along the edges of the leading surface lava flow. The flow front has advanced approximately 25 yards since yesterday. The small breakout flow upslope from the leading edge along the north flank also remains active and has advanced approximately 30 yards since yesterday and remains further upslope and to the north and does not pose an immediate threat to area communities.

Smoke conditions were light to moderate with a light rain throughout the area. There is no fire threat at this time.

HELCO crews will be working in the Government Beach road area and digging holes to allow for the installation of power poles. This will result in the road being blocked and the access will be limited to beach road residents only to minimize disruption and delays to the operations.

A Civil Defense overflight Sunday morning found that the leading edge of the lava flow had advanced by about 20 meters (25 yards) over the past day, while the flow upslope and north of the front advanced by about 25 meters (30 yards). Both of these advances reflect an overall increase in activity of the June 27th flow since Friday.

Puʻu ʻŌʻō Observations: Tilt at Puʻu ʻŌʻō has been inflationary over the past day, but this signal, especially since 4 AM Sunday morning, has been heavily influenced by rainfall and does not reflect volcanic activity. Glow was visible overnight above several outgassing openings in the crater floor, but there were no significant changes in activity within the crater over the past day. The most recent sulfur-dioxide emission-rate measurement for the East Rift Zone was 550 tonnes per day (from all sources) on September 25, 2014. Seismic tremor was low and constant.

Summit Observations: Steady inflationary tilt was recorded at the summit over the past 24 hours, and the lava level within the Overlook crater correspondingly rose by several meters. A few earthquakes were recorded beneath Kīlauea’s summit and south flank, and seismic tremor varied with changes in spattering on the surface of the lava lake but was low for most of Saturday and Sunday morning. GPS receivers spanning the summit caldera recorded about 5 cm (2 in) of extension between early May and early July. Since then, little significant extension or contraction has occurred. During the week ending on September 23, 2014, the elevated summit sulfur-dioxide emission rate was measured at 4,400–6,300 tonnes/day (see caveat below), and a small amount of particulate material was carried aloft by the plume.USGS Hawaiian Volcano Observatory on Sept. 27 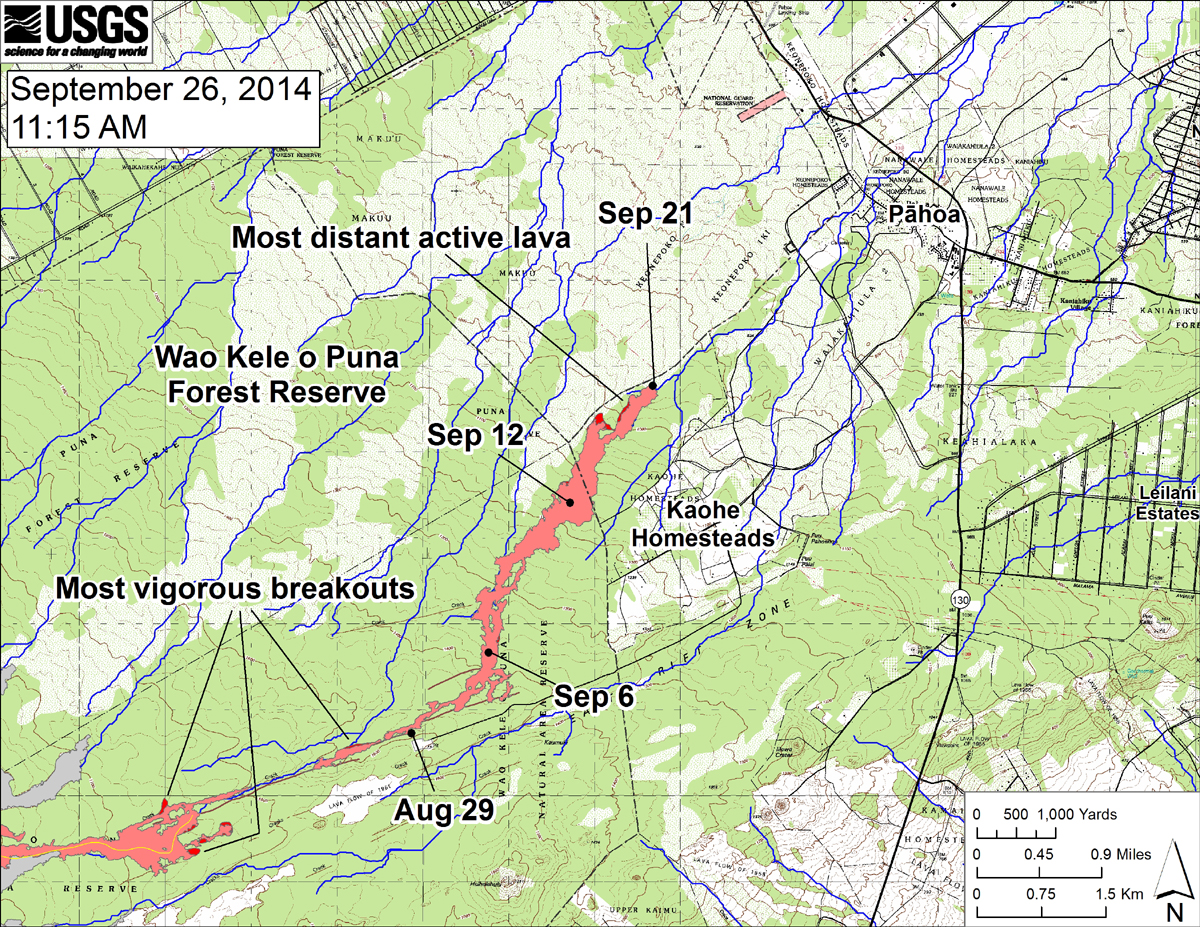