(ABOVE PHOTO) The June 27 lava flow as it appeared on September 29, by Ena Media Hawaii / Courtesy of: Blue Hawaiian Helicopters

This morning’s assessment shows lava flow activity continues along the edges of the front or leading surface lava flow however, the flow front had not advanced much since yesterday. The small breakout flows upslope from the leading edge along the north flank have also decreased in activity and had advanced approximately 20 yards in a north direction. All current flow activity does not pose an immediate threat to area communities.

Smoke conditions were light to moderate with light trade winds out of the northeast and a light rain was present in the area. There is no fire threat at this time. 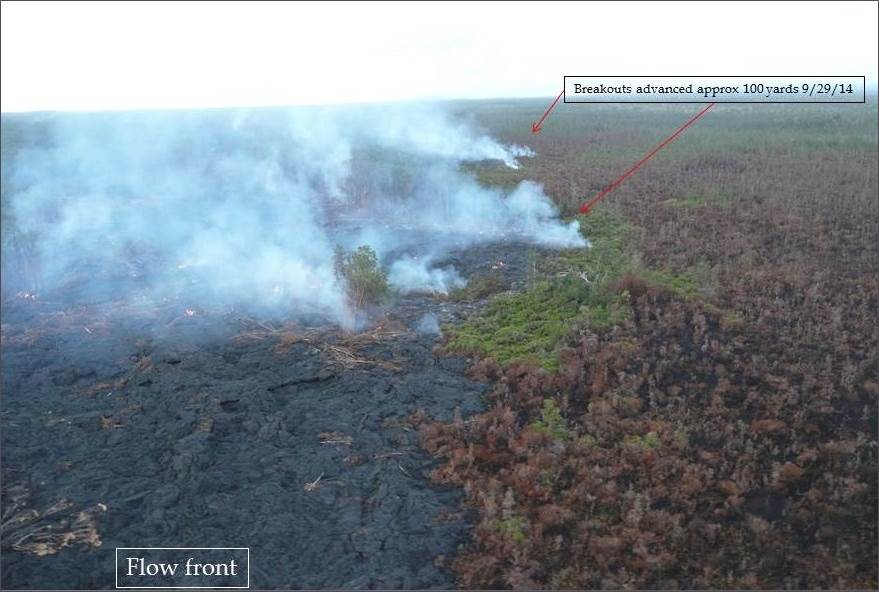 The June 27th lava flow remains active. An HVO overflight on Monday observed breakouts of lava where the flow first enters the crack system about 8 km (5 mi) behind the stalled front, and where it exits the crack system about 3 km (2 mi) back from the front. At the leading edge of the flow, two lobes of weak surface activity were observed at 125 m (410 ft) and 580 m (1900 ft) behind the front. Both lobes are creeping northeast around the north side of the existing flow. Lava continues to move through the tube from Puʻu ʻŌʻō, but the volume is low compared to that measured two weeks ago, during the period of rapid flow advance.

Puʻu ʻŌʻō Observations: There was no net change in ground tilt at Puʻu ʻŌʻō over the past day. Glow was visible overnight above several outgassing openings in the crater floor. The most recent sulfur-dioxide emission-rate measurement for the East Rift Zone was 550 tonnes per day (from all sources) on September 25, 2014. Seismic tremor is low and constant.

Summit Observations: After holding steady for much of Monday, inflationary tilt began Monday evening and is continuing as of Tuesday morning. The lava level within the summit vent rose accordingly to about 50 m below the Overlook crater rim. USGS Hawaiian Volcano Observatory on Sept. 27 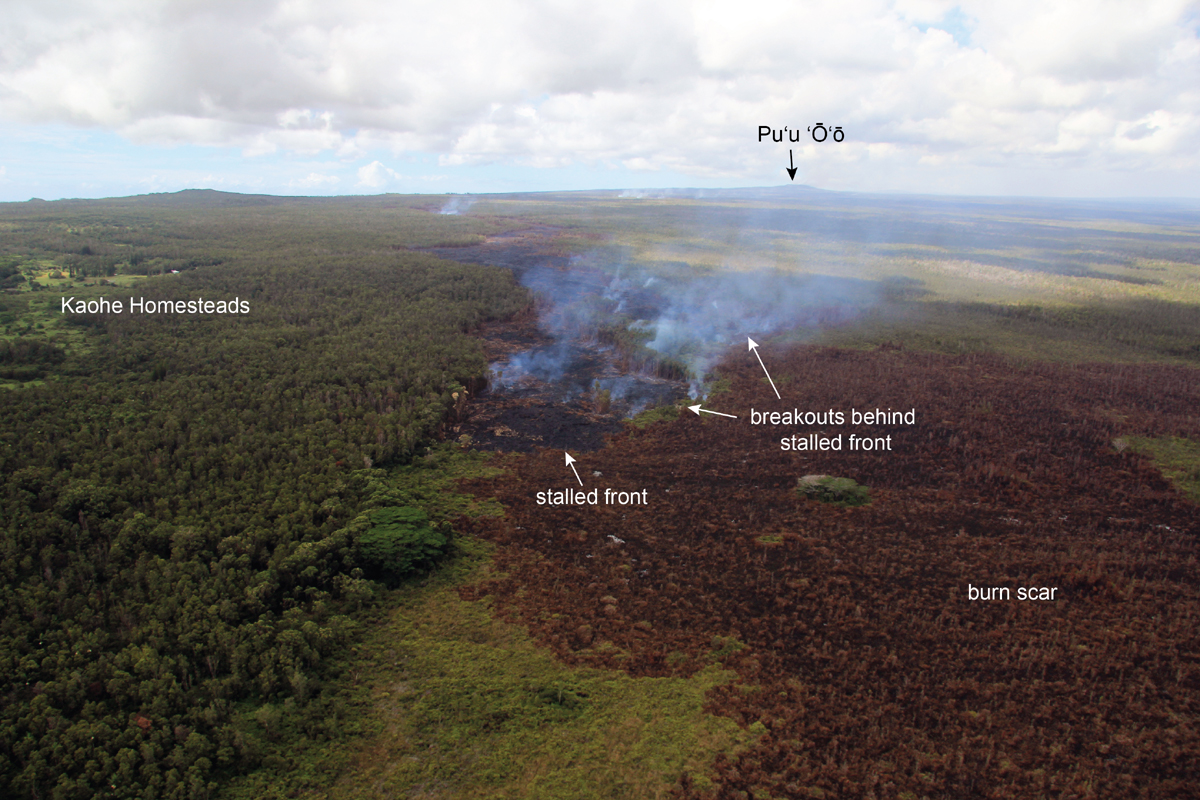 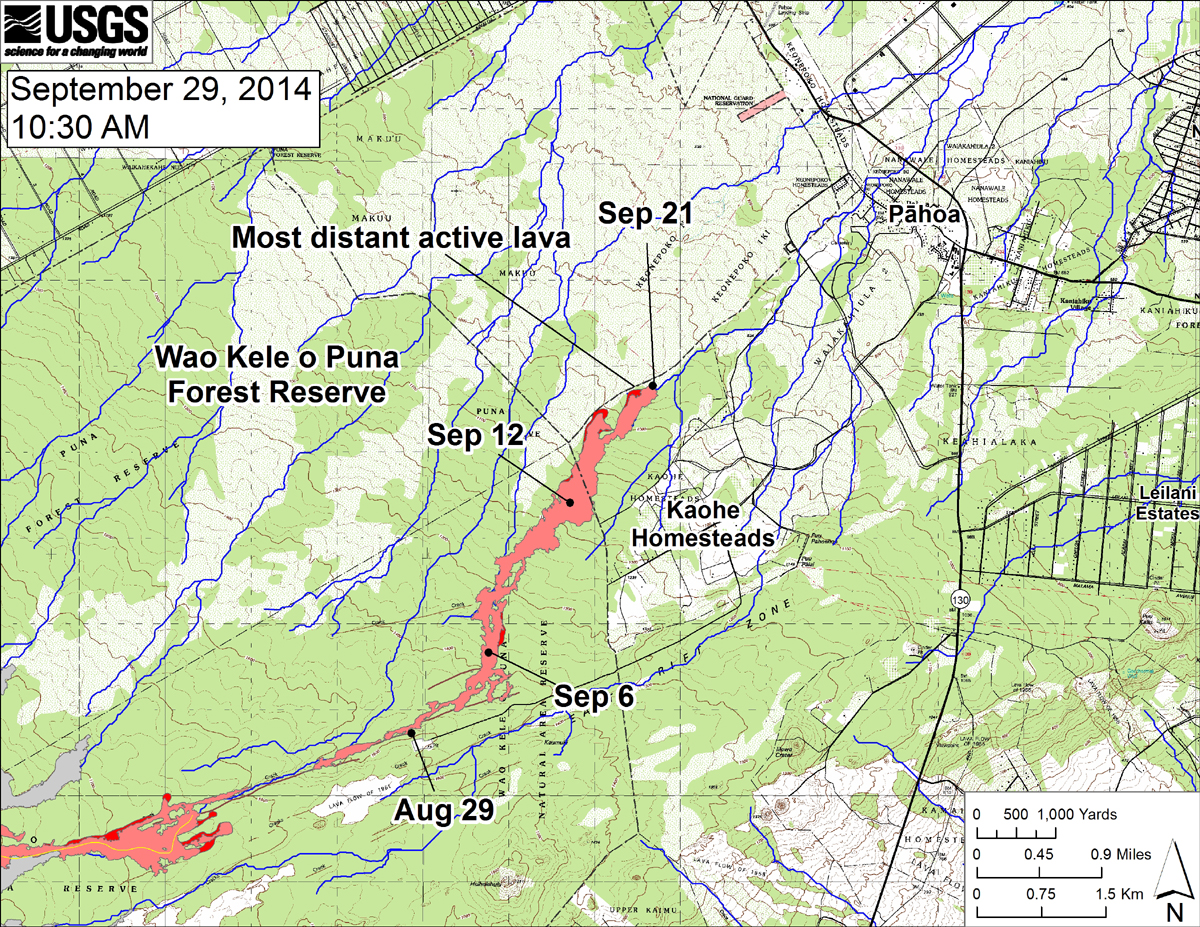 Courtesy USGS HVO (Sept. 29) “This large-scale map shows the distal part of the June 27th flow in relation to nearby Puna communities. The black dots mark the flow front on specific dates. Small breakouts were scattered across the surface of the flow upslope from the stalled front. Several breakouts were also active midway along the length of the flow near where lava first entered the crack system.” 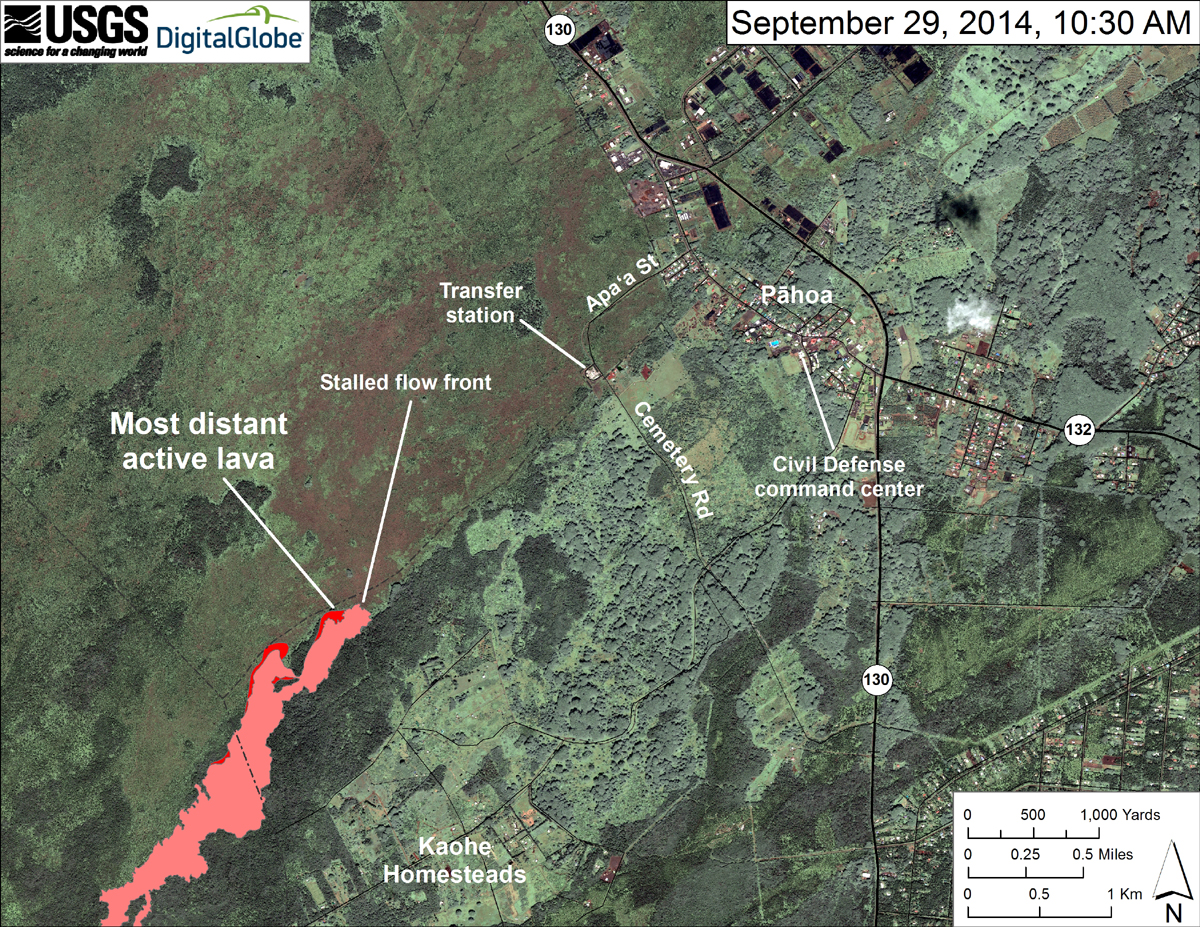 Courtesy USGS HVO (Sept. 29) “This map uses a satellite image acquired in March 2014 (provided by Digital Globe) as a base to show the area around the front of the June 27th lava flow. Surface activity near the flow front was advancing slowly northeast in two lobes. The lobe farthest from the vent (the closest to Pāhoa) was about 125 m (137 yards) behind the stalled flow front. It traveled about 80 m (87 yards) since Friday, September 26. A second lobe was about 580 m (634 yards) back from the stalled front, and it moved only about 65 m (71 yards) since Friday.”