Due to an ongoing emergency search and recovery mission, today’s helicopter assessment was delayed. An aerial survey performed later this morning shows that the flow front continues to be active and has advanced approximately 100 yards since yesterday. A very narrow finger at the flow front is moving along the tree line and the burning activity with that is producing a significant amount of smoke. There is no brush fire threat at this time and the burning is limited to the edges of the flow only.

The Railroad Emergency Route is NOT open at this time. The public is reminded that no public vehicles, persons, or activity is allowed within the emergency route until the route is opened. The route will be opened for use upon the direction of Civil Defense in the event HWY 130 is unusable due to the lava flow.

HELCO crews are continuing with work in the Government Beach road and the access will be limited to beach road residents only to minimize disruption and delays to the operations.

The public is reminded that the flow is not visible and cannot be accessed from any public areas. Access to the Kaohe Homesteads subdivision will remain restricted to area residents only.Hawaii County Civil Defense on Oct. 3

The June 27th lava flow remains active. Based on observations from HVO webcams, there have been no significant changes to the flow front since yesterday. An HVO overflight Wednesday morning observed that the slow-moving breakout behind the stalled front had reached the front and extended the leading edge of the flow about 30 m (100 ft). Surface flows remained active upslope of the flow front, with continued scattered breakouts in the area that lava first entered the crack system about 8 km (5 mi) behind the stalled front.

Summit Observations: Deflationary tilt began at Kīlauea’s summit yesterday and continues this morning. The lava lake level fluctuated with spattering and was roughly 40-45 m (131-147 ft) below the Overlook crater rim. There was no major change in seismicity on Kilauea over the past day; seismic tremor at the summit remained low and varied with changes in spattering on the surface of the lava lake.USGS Hawaiian Volcano Observatory on Oct. 3 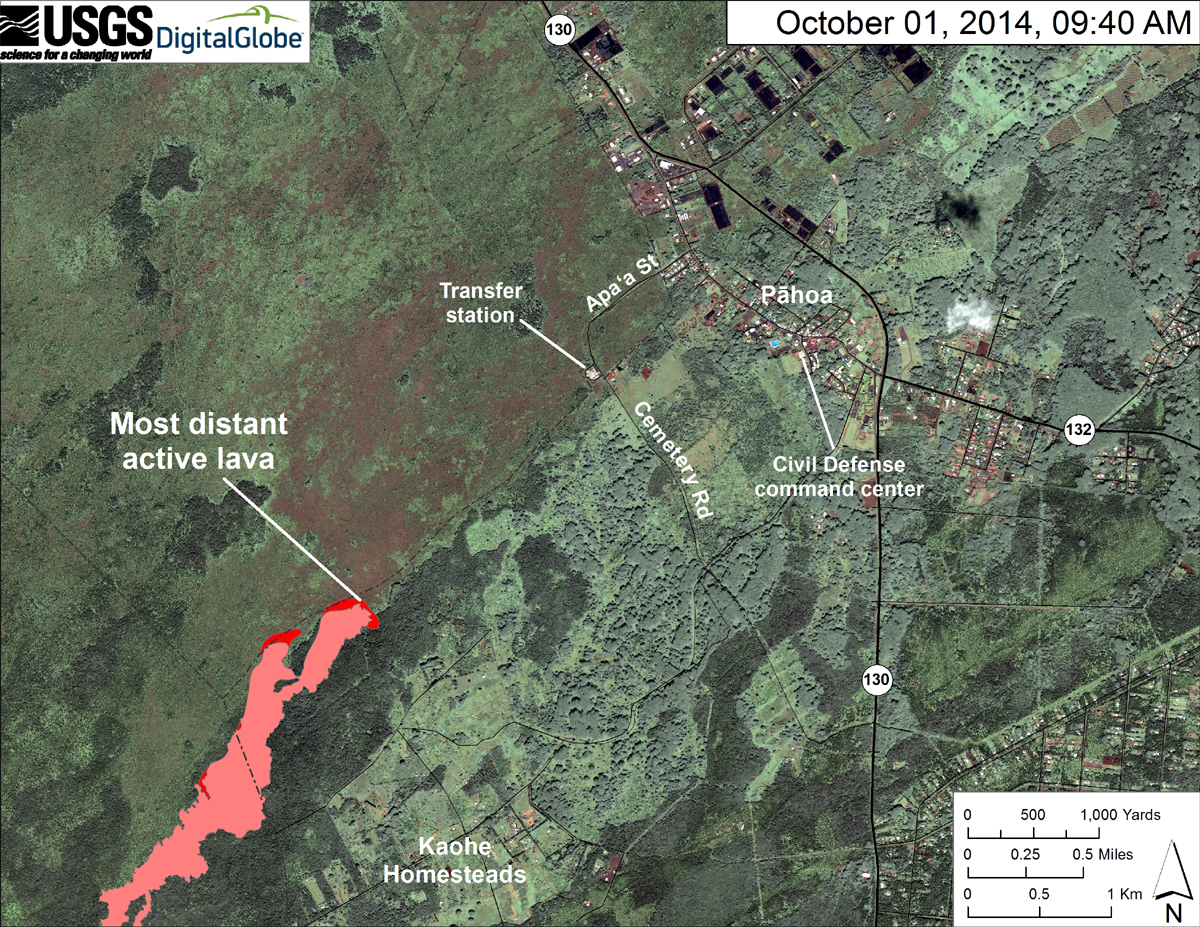 According to USGS HVO, “This map uses a satellite image acquired in March 2014 (provided by Digital Globe) as a base to show the area around the front of the June 27th lava flow. Surface activity near the flow front was advancing slowly northeast in two lobes. The active lobe farthest from the vent (the closest to Pāhoa) has now overtaken the stalled front and extended it by about 30 m (33 yards). It traveled about 150 m (273 yards) since Monday, September 29. A second lobe was about 450 m (492 yards) back from the stalled front, and it moved only about 140 m (153 yards) since Monday.”