Footage shows the lava burning through tall albizia trees as it slowly advances on Pahoa.

After a stall last week, the flow front is moving again, although slowly. Today, the lava moved into some forest along the south edge of the front. Overflight video by Mick Kalber (above) shows the lava burning through ohia and tall albizia trees. Today’s activity produced a significant amount of smoke. 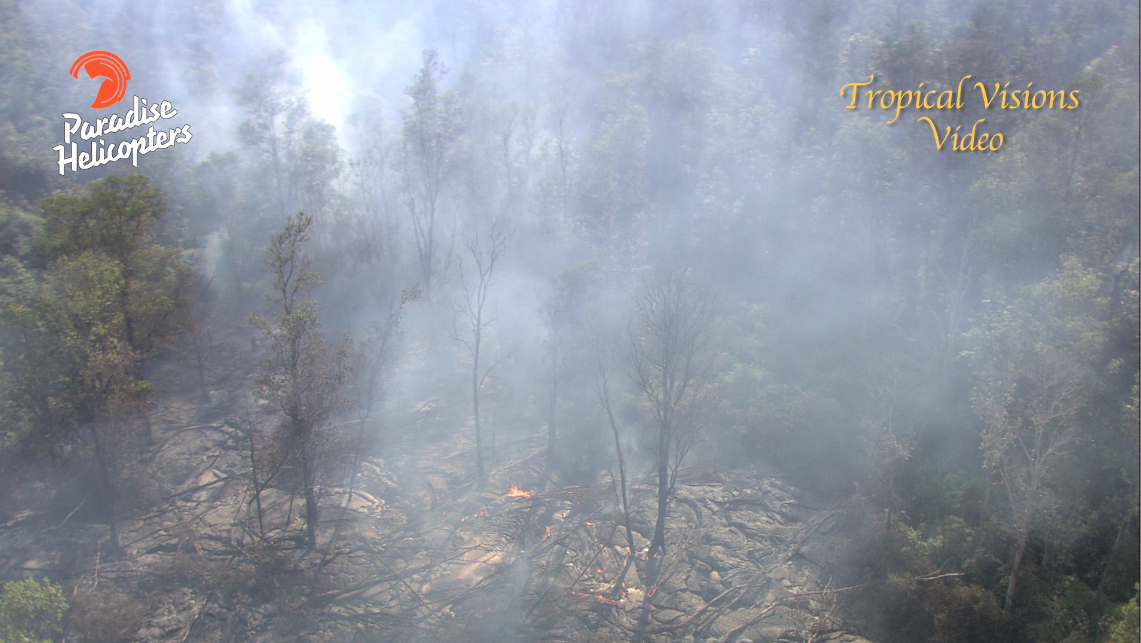 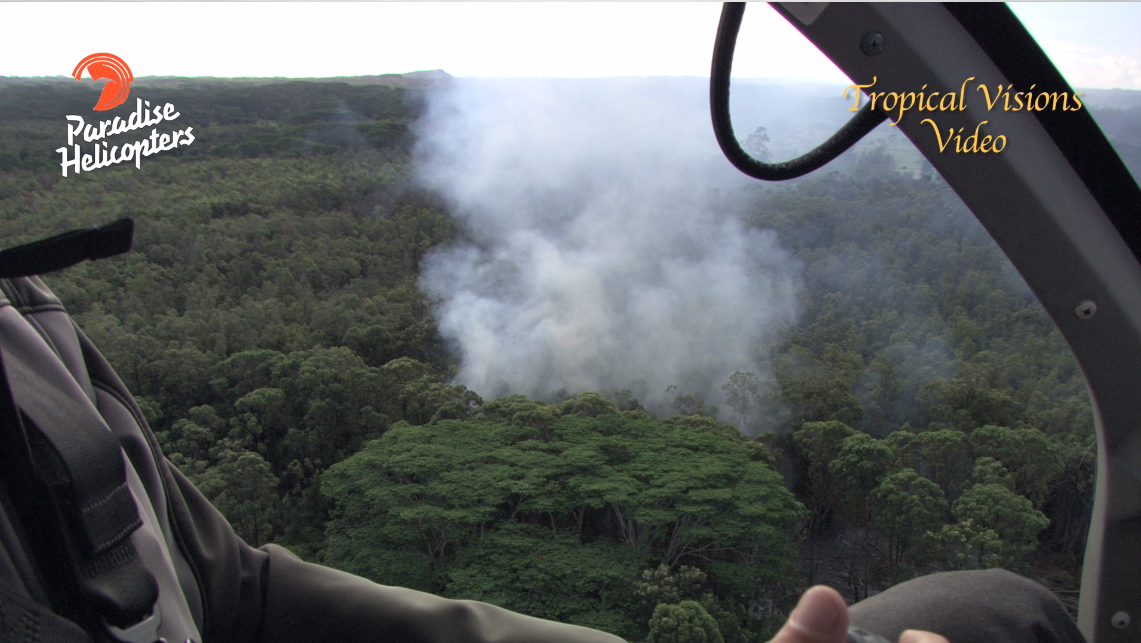 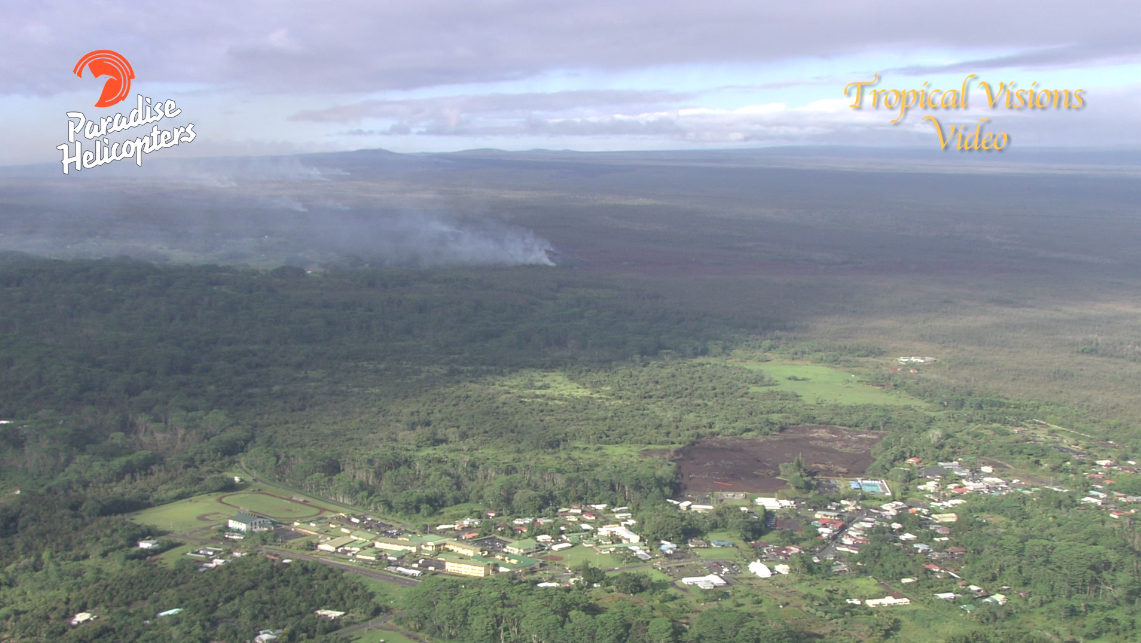 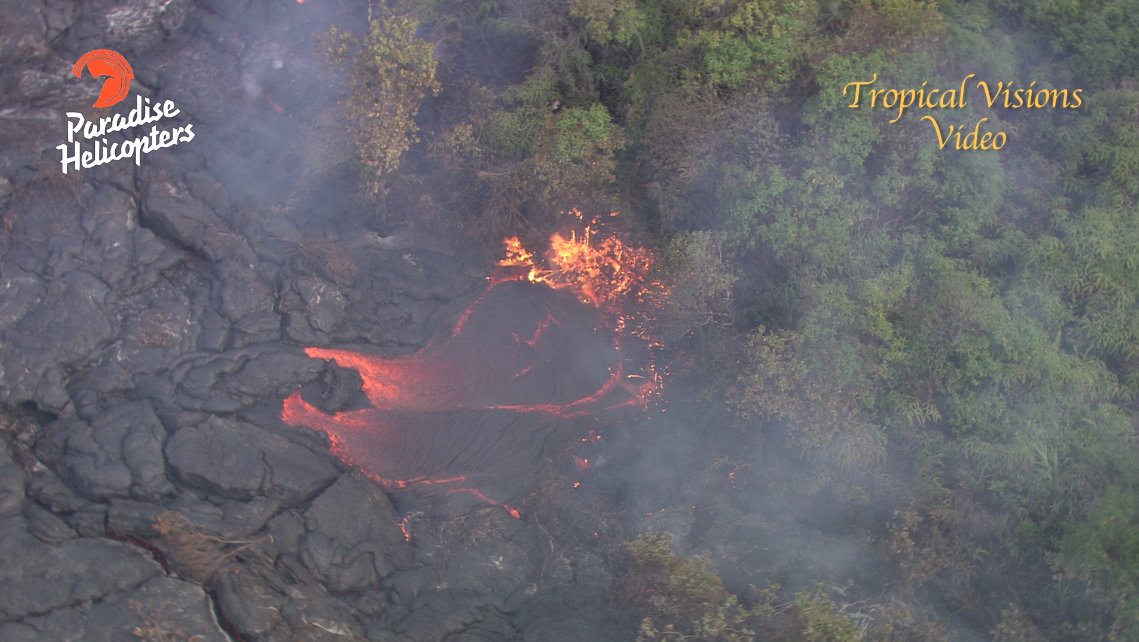 Recent Observations:
[Lava flow] The narrow flow that overtook the stalled flow front earlier this week has moved about 270 m (300 yards) downslope over the past two days. The leading edge is now about 2 km (1.2 mi) from Apa`a St.

Remarks: The Pu‘u ‘Ō‘ō vent in the East Rift Zone of Kīlauea Volcano began erupting on January 3, 1983, and has continued erupting for more than 31 years, with the majority of lava flows advancing to the south. Over the past two years, lava flows have issued from the vent toward the northeast. The June 27th flow is the most recent of these flows and the first to threaten a residential area since 2010-2011. On June 27, 2014, new vents opened on the northeast flank of the Pu‘u ‘Ō‘ō cone and fed a narrow lava flow to the east-northeast. On August 18, the flow entered a ground crack, traveled underground for several days, then resurfaced to form a small lava pad. This sequence was repeated three more times over the following days with lava entering and filling other cracks before reappearing at the surface, in two of the cases farther downslope. Lava emerged from the last crack on September 6, forming a surface flow that initially moved to the north, then to the northeast, at a rate of 400 m/day (1,300 ft/day). The flow slowed thereafter and, between September 12 and 19, the rate of advancement varied, averaging 225 m/day (740 ft/day). The flow front stalled by September 22, but new breakouts behind the flow front began to push forward, overtaking the stalled front on September 29 and advancing 270 m (300 yards) between October 1 and 3. USGS Hawaiian Volcano Observatory on Oct. 3 USGS HVO: This map uses a satellite image acquired in March 2014 (provided by Digital Globe) as a base to show the area around the front of the June 27th lava flow. Surface activity comprised of Pāhoehoe toes and lobes were scattered across the leading edge of the flow. Lava continued to advance downslope and extended the front by about 270 m (295 yards) since Wednesday, October 1, 2014. USGS HVO: This large-scale map shows the distal part of the June 27th flow in relation to nearby Puna communities. The black dots mark the flow front on specific dates. Small breakouts were scattered across the leading edge of the flow today. Lava continues to advance downslope and extended the front by about 270 m (295 yards) since our October 1, 2014 over flight. Several breakouts were also active along the margin of the flow upslope of the leading edge and midway along the length of the flow near where lava first entered the crack system. The blue lines show down-slope paths calculated from a 1983 digital elevation model (DEM; for calculation details, see http://pubs.usgs.gov/of/2007/1264/). Down-slope path analysis is based on the assumption that the DEM perfectly represents the earth’s surface. DEMs, however, are not perfect, so the blue lines on this map indicate approximate flow path directions.