Roads, electricity, health care, public safety and education are adjusting in order to be prepared.

(ABOVE VIDEO) The presentation made by Civil Defense head Darryl Oliveira to the Hawaii County Council Committee on Public Safety and Mass Transit during a meeting held on Tuesday (Sept. 30). Video by David Corrigan

Here are a number of updates Big Island Video News has been given by different entities on their ongoing lava flow preparations.

The company continues to work with Hawai‘i County Civil Defense and other agencies to monitor and evaluate the flow and is prepared to respond. Because of the unpredictable nature of the flow, Hawai‘i Electric Light has developed several plans to keep the power on and will put into action the plan that best fits the situation. The safety of employees and community is always the top priority.

“Our plans are based on key objectives that include keeping employees and the community safe and keeping the power on for our customers as long as is safely possible,” said spokesperson Rhea Lee. “In developing our plans, we consulted with volcanologists, Hawai‘i County Civil Defense and other County agencies, leaders in the Hawaiian community, and other partners.”

Plans include, but are not limited to:

“There is a lot of focus on protecting poles as a means to retain the current transmission and distribution system,” Lee said. “The designs developed are experimental, but we are hopeful that they will be successful and can be used on select wooden poles as the lava progresses.”

In addition, Hawai‘i Electric Light is exploring the possibility of operating a micro-grid in the event the lava flow isolates lower Puna from the power system.

“A micro-grid is disconnected from the utility grid and generates power for a specific area,” Lee said. “This option may allow us to continue to provide power to the lower Puna community until we are able to rebuild transmissions lines that are damaged by lava and interconnect these lines to the grid.”

However, outages may occur despite efforts to keep the power on for as long as possible. As the flow gets closer to our facilities, we will provide more specific information as to how customers could be impacted.

For customers who evacuate, the company recommends:

Hawai‘i Electric Light’s free “Handbook for Emergency Preparedness” provides detailed information on preparing for emergency situations. The handbook is available in English, Cantonese, Ilocano, Korean, and Vietnamese and can be found at the company’s business offices, on its website www.hawaiielectriclight.com, or by calling 969-0137.

As there are new developments, updates will be provided to the media and public and also posted on Hawai‘i Electric Light’s website, Twitter, and Facebook accounts.HELCO media release on Oct. 3, 2014 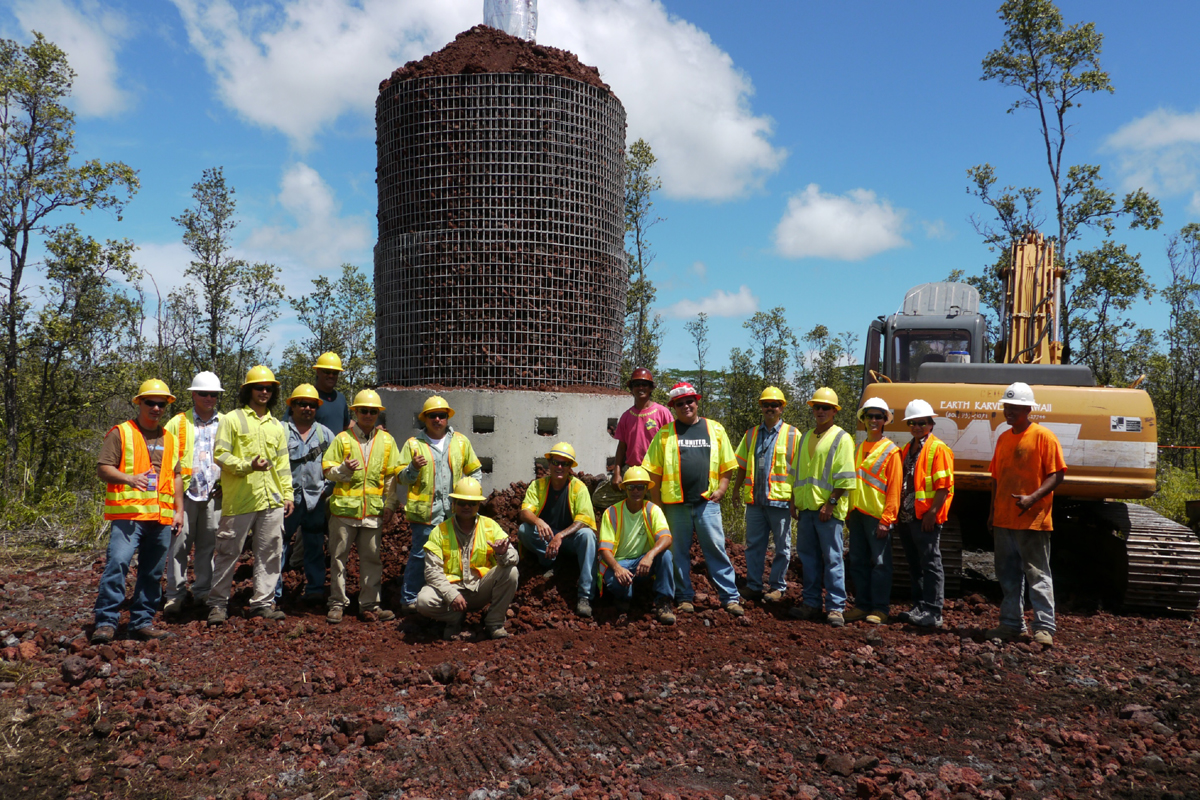 The Hawai‘i State Department of Education (DOE) continues to work on contingency plans for public schools, students and staff in preparation for lava to eventually cross Pahoa’s Highway 130. The lava flow stalled Sunday on its approach toward Pahoa town. However, volcanic activity is ongoing.

“We are doing our best to keep a sense of normalcy in our schools and we stand ready to adjust our operations as needed,” stated Mary Correa, complex area superintendent for Ka‘u, Kea‘au, Pahoa.

Given the information from the subject-area experts, the DOE is committed to doing what is necessary to allow public school teachers and students to continue teaching and learning. This includes preparing for the potential loss of an elementary school. The DOE is building an alternate site for elementary students in the Kea‘au High lower parking lot that could hold a number of classrooms. The site would accommodate at least 17 classrooms and up to 500 students and staff. The initial estimated cost to the DOE is $9 million.

“We believe that setting up an alternate site is necessary in order to ensure that our teachers and students have everything ready should we lose a school,” stated Superintendent Kathryn Matayoshi. “We continue to tackle a number of scenarios and we appreciate the flexibility of our staff, the cooperation of our families, and the collaboration with Hawai‘i County agencies in our preparation efforts.”

Based on the expectation that access to Keonepoko Elementary, Pahoa High & Intermediate, and Pahoa Elementary will be compromised, plans are being made for students who reside north of the flow to be rerouted to the Kea‘au complex when the flow crosses Highway 130. Students who reside south of the flow will remain in their homeschools if those facilities are not negatively impacted.

“When the lava crosses the highway, we want to make sure everything is in place in order to provide continued school services,” said Correa.

Pahoa complex currently has an estimated 1,800 students and roughly 300 employees.

Plans have been shared with parents at all three schools via letters and school meetings. Besides student planning, the DOE is also initiating plans that would guide affected employees on necessary changes. Earlier this month the DOE asked parents and staff who may have changed their residence to immediately update their contact information with school administrators. Dept. of Education on Sept. 25, 2014

A rendering of the alternate site plan, courtesy the DOE.

What will happen to the DWS water system if lava flows over Highway 130? The DWS system has source and storage sites on both sides of Pāhoa town. If the lava continues on the projected path, we plan to close valves on both sides of the flow which will allow us to retain continued service on either side. In other words, our system will continue to be active on either side of the flow.

What about the water spigots? As described above, based on the projected path, we expect to continue water service including the spigots located on the main highway before Pāhoa town and the spigots at the entrance to Nānāwale.

What about Kapoho area? Kapoho as well as Pohoiki, Nānāwale, and Lanipuna are serviced by our Pāhoa system. As described above, we expect to continue water service including those areas.

When will the Pāhoa well repair be completed? September 28, 2014. If the lava flow impacts our system prior to that date, we will haul water from our Kalapana system, which is a separate system with its own sources, to our Pāhoa system.

Will Kalapana be affected? Kalapana is a separate water system with its own source, storage and pipelines. Based on the projected path of the flow, we don’t anticipate Kalapana being affected.

What if power goes out? We have generators and fuel for our well sites in case of an extended power outage. Water use should be limited to essential needs only to insure continued water service to as much of the community for as long as possible.

What about the water system in Hawaiian Beaches & Hawaiian Shores? Although those are private water systems, we have a mutual understanding that we will help each other out in times of emergency. So, if their system is affected and we are able to, we will coordinate a way to connect our system to theirs to provide water. Similarly, if our system is affected and they have a way of assisting us, they will do so.

If I need to evacuate my home, what should I do regarding my water service/meter? As part of your preparations to evacuate, the DWS recommends you take precautions with appliances connected to your water system prior to closing the valve located inside your meter box. Call (808) 961-8790 for any follow up questions you may have for your account.

If Pāhoa Post Office closes, where will I receive my bills? You can request a change of billing address from the DWS to ensure uninterrupted bills, or, you can work with the U.S. Postal Service regarding alternate mail delivery plans for your area.Department of Water Supply