The lava flow front has advanced approximately 65 yards since yesterday.

This morning’s assessment shows that the flow front continues to be active and has advanced approximately 65 yards since yesterday. The narrow flow front is moving northeast along the tree line and may begin to enter areas of lighter vegetation. The burning activity is producing a significant amount of smoke and smoke conditions in the area were light to moderate with a light trade wind out of the northeast.

Due to the uncertainty of the flow and possible impact on the community, the State Department of Health has issued the following advisory:

Residents dependent on medical services, treatment, or supplies and who live in communities that may be cut off by the advancing lava flow to relocate outside the affected area to ensure continued access to necessary medical support. If the lava flow crosses Highway 130, medical services and supplies will be severely limited and emergency medical service response time may be significantly delayed.

With the unpredictable nature of the lava flow, residents and visitors are advised to listen to Hawaii County Civil Defense updates and advisories.

We would like to thank everyone for your patience and understanding and your cooperation and assistance is greatly appreciated.Hawaii County Civil Defense on Oct. 9

The June 27th lava flow activity remains relatively slow and steady. Lava continues to move through the tube from Puʻu ʻŌʻō, delivering lava to the flow front. An HVO overflight on Wednesday observed scattered breakouts along the edges and surface of the flow, mostly within 1.5 km (1 mile) of the front. There were also at least two small breakouts present roughly 2.5-3 km behind the flow front, as well as where the flow first enters the crack system approximately 9 km (5.5 mi) behind the active flow front. The front remains narrow, about 110 m wide. The flow front was 1.4 km (0.9 miles) from Apa`a St. and 2.5 km (1.6 miles) from Pahoa Village Road, measured in a straight line. Based on this morning’s civil defense over flight, the leading edge of the flow has advanced 60 m (65 yards) to the northeast since yesterday.

Puʻu ʻŌʻō Observations: There was no significant net change in ground tilt at Puʻu ʻŌʻō over the past day. Glow was visible overnight above several outgassing openings in the crater floor. The most recent sulfur-dioxide emission-rate measurement for the East Rift Zone was 550 tonnes per day (from all sources) on September 25, 2014. Seismic tremor has been low and constant.

Summit Observations: There has been very slight inflationary ground tilt since mid-day Wednesday, with no significant change in lava level in the Overlook crater. The level of the surface of the lava lake was 55 m below the overlook crater rim. There was no major change in seismicity on Kīlauea over the past day. USGS Hawaiian Volcano Observatory on Oct. 9 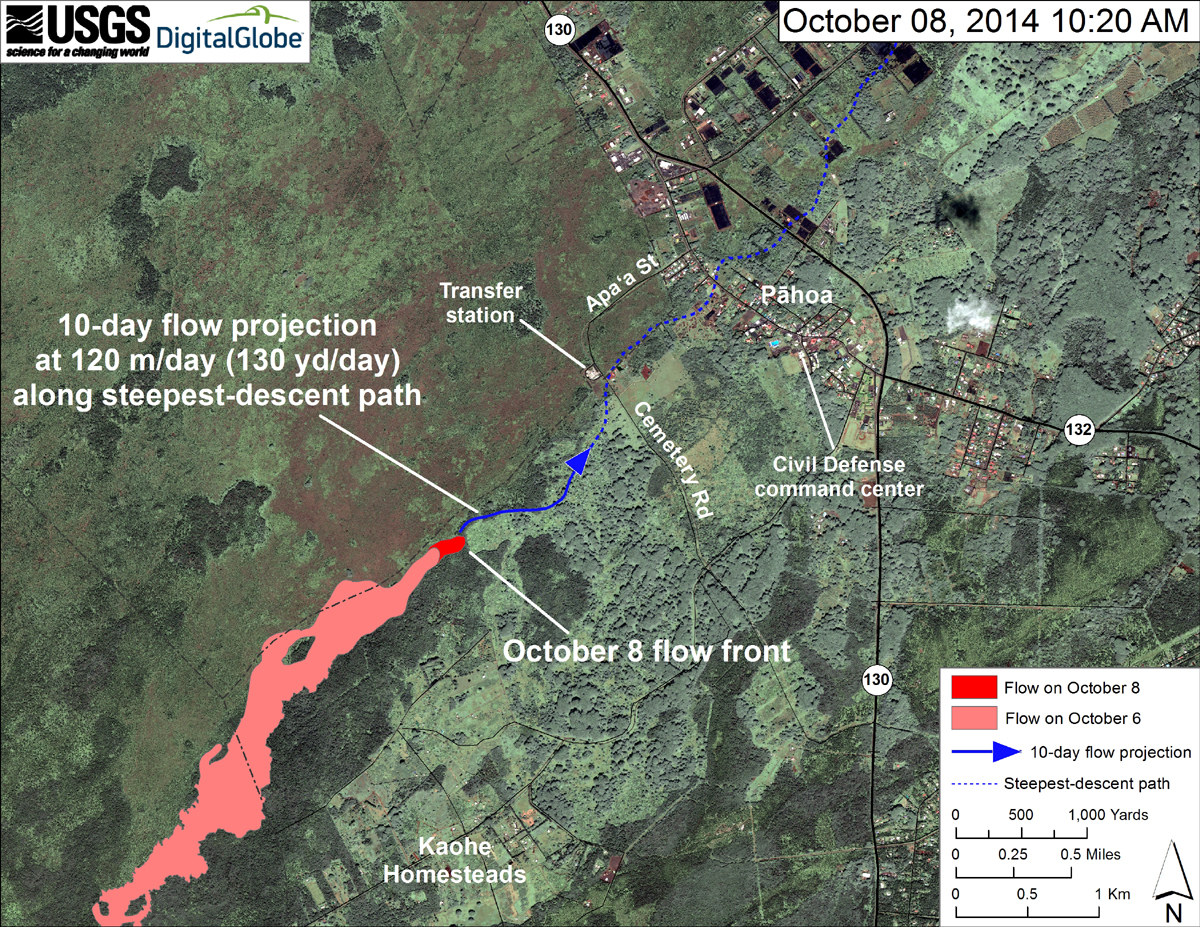 USGS HVO: “This map uses a satellite image acquired in March 2014 (provided by Digital Globe) as a base to show the area around the front of the June 27th lava flow. The area of the flow on October 6, 2014, at 12:15 AM is shown in pink, while widening and advancement of the flow as mapped on October 8 at 10:20 PM is shown in red. The flow front advanced about 200 m (220 yd) since our October 6, 2014, overflight. This puts the flow front about 1.7 km (1.1 mi) upslope from Apaʻa Street, as measured along the path of steepest-descent.
The solid blue line with the arrowhead shows the projected path of the flow over the next 10 days (to October 16), based on the steepest-descent path and the average advance rate of 120 m/day (130 yd/day) achieved since September 29. The amount of lava erupted from the June 27th vent, and the advance rate of the resulting lava flow, have been variable. The flow could speed up or slow down; the flow front could stall again, and a new active flow front could start again farther upslope; or the flow could stop altogether. Thus, this projection is subject to change.
The dotted blue line shows the steepest-descent path, calculated from a 1983 digital elevation model (DEM; for calculation details, see http://pubs.usgs.gov/of/2007/1264/), that the flow is projected to follow. Steepest-descent path analysis is based on the assumption that the DEM perfectly represents the earth’s surface. DEMs, however, are not perfect, so the dotted blue line indicates an approximate flow path direction. “ 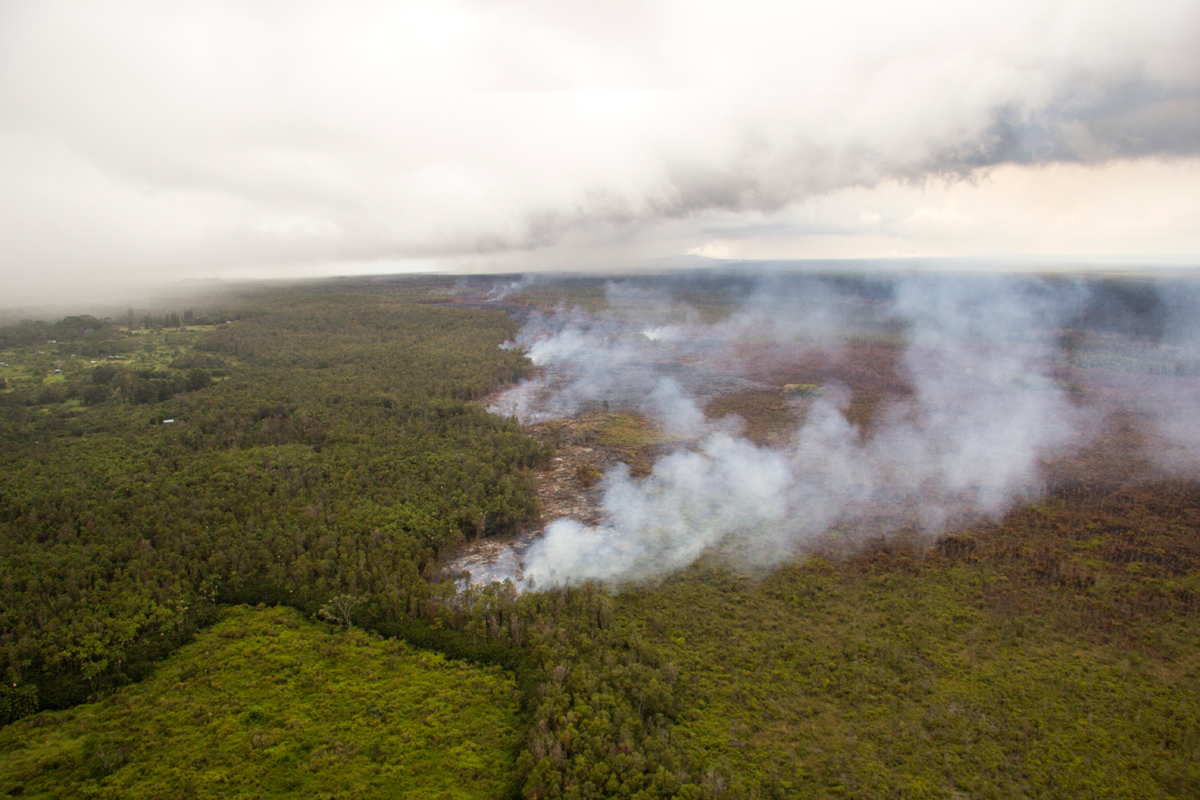 From USGS HVO: “The June 27th lava flow remains active, and continues to slowly advance towards the northeast along the forest boundary. The flow front remains narrow, about 100 m (yards) wide, and was 1.4 km (0.9 miles) from Apaʻa St. and 2.5 km (1.6 miles) from Pāhoa Village Road (as measured along a straight line).”