The leading edge of the flow went from “stalled” a few days ago to over 400 yards in one day. The sudden increase in speed has emergency officials on high alert, but no evacuations have been ordered at this time.

This morning’s assessment shows that the narrow finger that was advancing along the south edge of the flow has advanced approximately 425 yards since yesterday. This new flow front is active and moving in a northeast direction. Currently the leading edge of the advancing flow is approximately .3 miles from the Apa’a Street area near the Pahoa Transfer Station. There was very little burning activity and smoke conditions were moderate. There is no brush fire threat at this time.

With the change in flow activity and advancement, Apa’a Street and Cemetery Road will be closed between the Pahoa Transfer Station and the Kaohe Homesteads Road. In addition, Civil Defense and public safety personnel will be operating in the area round the clock to maintain close observations of flow activity.Hawaii County Civil Defense on Oct. 23 at 8:45 a.m. HST

Lava continues to erupt at a low discharge rate from Puʻu ʻŌʻō into the June 27th flow lava tube.

The distal portion of the June 27th lava flow was mapped this afternoon by HVO scientists via helicopter. The length of the flow at that time was 17.9 km (11.1 mi) as measured in a straight line, and 20.8 km (12.9 mi) as measured along the axis of the flow.

A narrow finger of lava less than 50 m (55 yd) wide overtook the flow front in the past 2 days, moving 370 m (405 yd) since Monday. Today the flow was moving downslope in a small gully, which increased this particular flow’s advance rate from about 80 m/day (87 yd/day) during the previous week to as much as 300 m/day (330 yd/day) at times during the past 2 days. The flow is continuing to follow the steepest-descent path toward Pāhoa as shown on lava flow maps.

The previous flow front just upslope of this new flow has also advanced downslope at a rate of about 40 m/day (44 yd) during the past 2 days.

Daily updates about Kīlauea’s ongoing eruptions, recent images and videos of summit and East Rift Zone volcanic activity, and data about recent earthquakes are posted on the HVO Web site at http://hvo.wr.usgs.gov.

Our next overflight is scheduled for Friday. A new status report will be posted as warranted. USGS Hawaiian Volcano Observatory on Oct. 22 at 11:55 p.m. HST 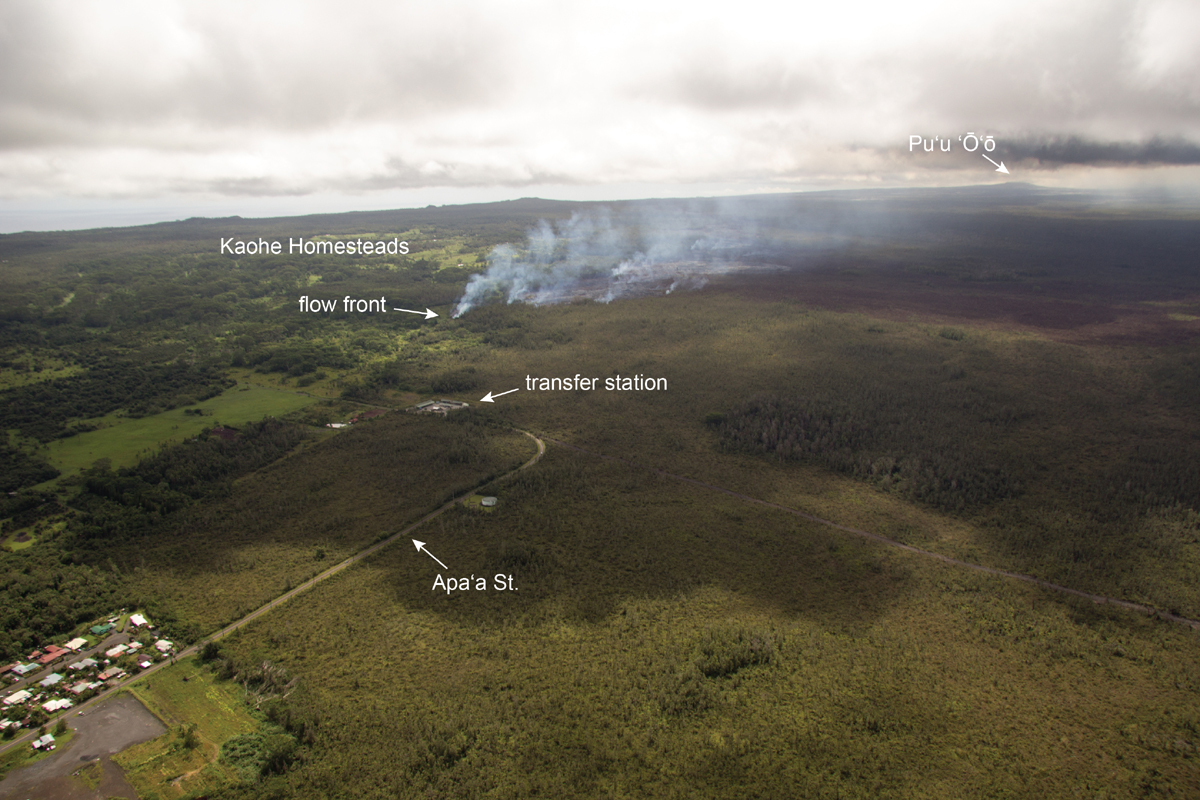 USHS HVO photo from Oct. 22 shows a wider view of the flow front, showing its proximity to Apaʻa St. and the transfer station. The vent for the June 27th lava flow is on Puʻu ʻŌʻō cone, which can be seen in the upper right portion of the photograph. The residential area in the lower left corner is in the western portion of Pāhoa. 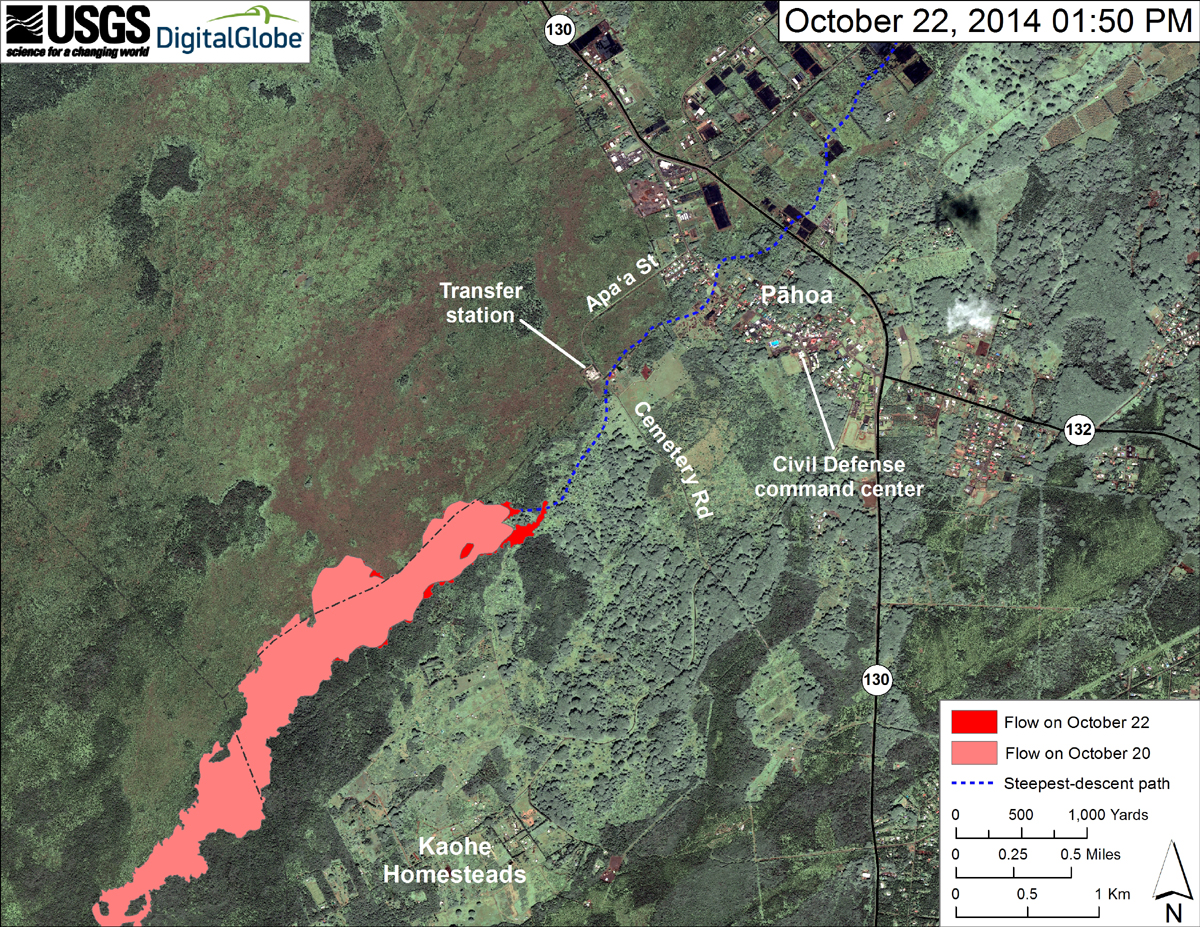 From USGS HVO: “This map uses a satellite image acquired in March 2014 (provided by Digital Globe) as a base to show the area around the front of the June 27th lava flow. The area of the flow on October 20, 2014, at 1:00 PM is shown in pink, while widening and advancement of the flow as mapped on October 22 at 1:50 PM is shown in red.
Today, the June 27th flow was once again moving closer to Apaʻa Street. The flow front was a narrow finger, 20 to 50 m (22–55 yd) wide, traveling downslope within a gully on private land. Because the flow was quite narrow, it was advancing relatively rapidly – it went 370 m (405 yd) in the past 2 days – but it will likely slow down when it reaches more level terrain just above Apaʻa Street. When mapped from the air this afternoon, the flow was about 0.8 km (0.5 mi) upslope from the closest point along Apaʻa Street, as measured in a straight line, and about 1.0 km (0.6 mi) upslope as measured along the path of steepest-descent that the flow has been following for several weeks.”