The lava is 150 yards from Cemetery Road, advancing about 11 yards per hour, and Hawaii's governor wants federal assistance.

(ABOVE PHOTO) Darryl Oliveira, Hawaii County Civil Defense administrator, does the talking during the 3 p.m. media conference call. Footage is from various sources, including the latest overflight video from Ena Media Hawaii and Blue Hawaiian Helicopters.

HVO scientists completed a helicopter overflight of the June 27th lava flow early Friday afternoon and have been observing the flow from the ground throughout the day.

Today’s mapping shows that the lava flow has advanced 730 m (800 yd) over the past two days. The leading edge of the flow is moving downslope along two fronts: a narrow finger and a slower-moving and broader lobe that split from the narrow finger and is moving slightly to the SE.

About 275 m (300 yd) upslope of Cemetery Road, the narrow finger of lava, which has been restricted by a man-made berm, has now inflated up to the level of the berm and may overtop it, which could send lava closer to the Pāhoa transfer station if it continues to flow downslope.

Upslope of the flow front, near the north border of Ka‘ohe Homesteads, a large breakout, which has been active for the past few days, is widening the SE margin of the flow field.

As part of the overflight, HVO scientists were able to measure the cross sectional area of the lava tube feeding the flow. This measurement suggests that the volume of lava being supplied to the flow from the Puʻu ʻŌʻō vent has increased slightly. The cross-sectional area of the tube measured today—2.3 square meters (2.8 square yards)—is about the same as that measured 2 weeks ago.

Daily updates about Kīlauea’s ongoing eruptions, recent images and videos of summit and East Rift Zone volcanic activity, and data about recent earthquakes are posted on the HVO Web site at http://hvo.wr.usgs.gov.

Our next overflight is scheduled for Monday, but HVO scientists will be conducting field work each day to map the advance of the flow and collect other observations. New status reports will be posted as additional data become available, typically each morning and afternoon. USGS Hawaiian Volcano Observatory on Oct. 24 at 3:56 p.m. HST 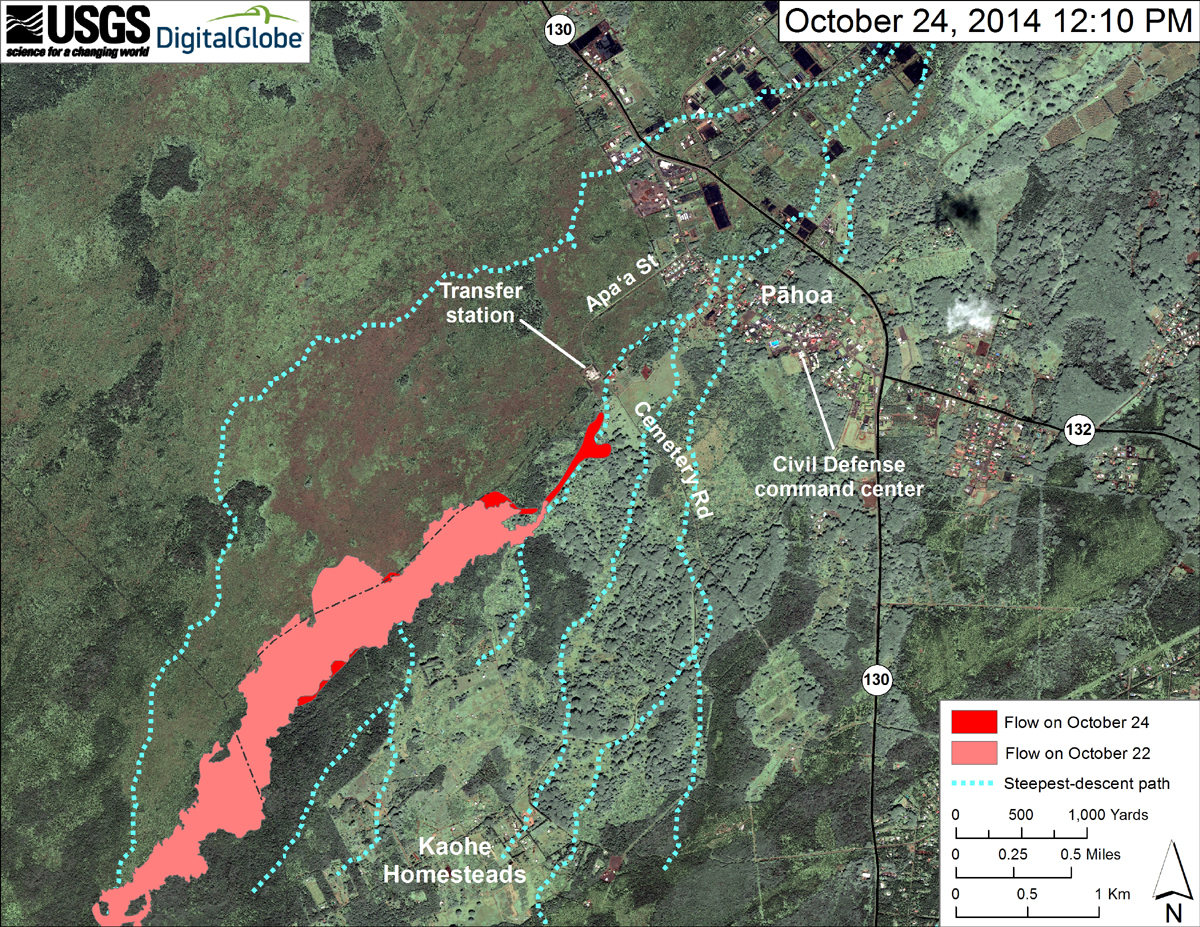 Emergency protective measures undertaken by Hawaii County include the repair, restoration, and re-establishment of alternate routes in and out of affected communities. State efforts include measures to accommodate approximately 900 schoolchildren that will be displaced by the lava flow, and support to county requests for additional air quality monitoring.Office of Governor Neil Abercrombie on Oct. 24