The lava continues its advance towards Pahoa Village

(ABOVE PHOTO) This USGS Hawaiian Volcano Observatory photo taken on Oct. 25 shows lava advancing across the pasture between the Pāhoa cemetery and Apaʻa Street, surrounding a barbed wire fence.

The flow continues to remain active and has advanced approximately 35 yards since 2:00 this afternoon. The flow front crossed Apa’a Street at approximately 3:50am this morning and continues to advance in a northeast direction towards the cemetery. The flow is currently moving at approximately 10 yards per hour. Smoke from the burning asphalt is not affecting area communities at this time however residents are advised that conditions could change with the varying winds.

Based on the current flow location, direction and advancement, residents in the flow path will be placed on an evacuation notice.

Apa’a Street and Cemetery Road will remain closed between the Pahoa Transfer Station and the Kaohe Homesteads Road. In addition, Civil Defense and public safety personnel will be operating in the area round the clock to maintain close observations of flow activity.

Additional updates will be broadcasted as conditions change.Hawaii County Civil Defense on Oct. 25 at 7:45 p.m. HST

HVO scientists conducted ground observations of the June 27th lava flow throughout the morning and afternoon of Saturday, October 25, 2014. Earlier that morning, at about 3:50 AM, HST, the narrow finger that had been moving rapidly downslope reached and crossed Apaʻa Street / Cemetery Road near the driveway to the Pāhoa cemetery. The lobe located to the southeast of the narrow finger, described in yesterday’s status report, is no longer advancing.

Over the course of the day, the advance rate of the narrow finger varied between 10 and 15 m/hr (11 to 16 yd/hr)—that’s equivalent to 240–360 m/day (260–390 yd/day). Through the morning, the flow moved downlope along the cemetery driveway before veering to the southeast into the adjoining pasture in the early afternoon.

The pasture between Apaʻa Street and the cemetery is characterized by gentle topography, but the slopes increase at or just below the cemetery. If the flow reaches this point, its advance rate may increase.

The pasture is located between two of the steepest decent paths plotted on HVO’s lava flow maps, and it is unclear at this point which path the flow will follow. Both paths, however, join just below the cemetery, so the overall flow path leading to Pāhoa Village Road is unchanged.USGS Hawaiian Volcano Observatory on Oct. 25 at 5:33 p.m. HST 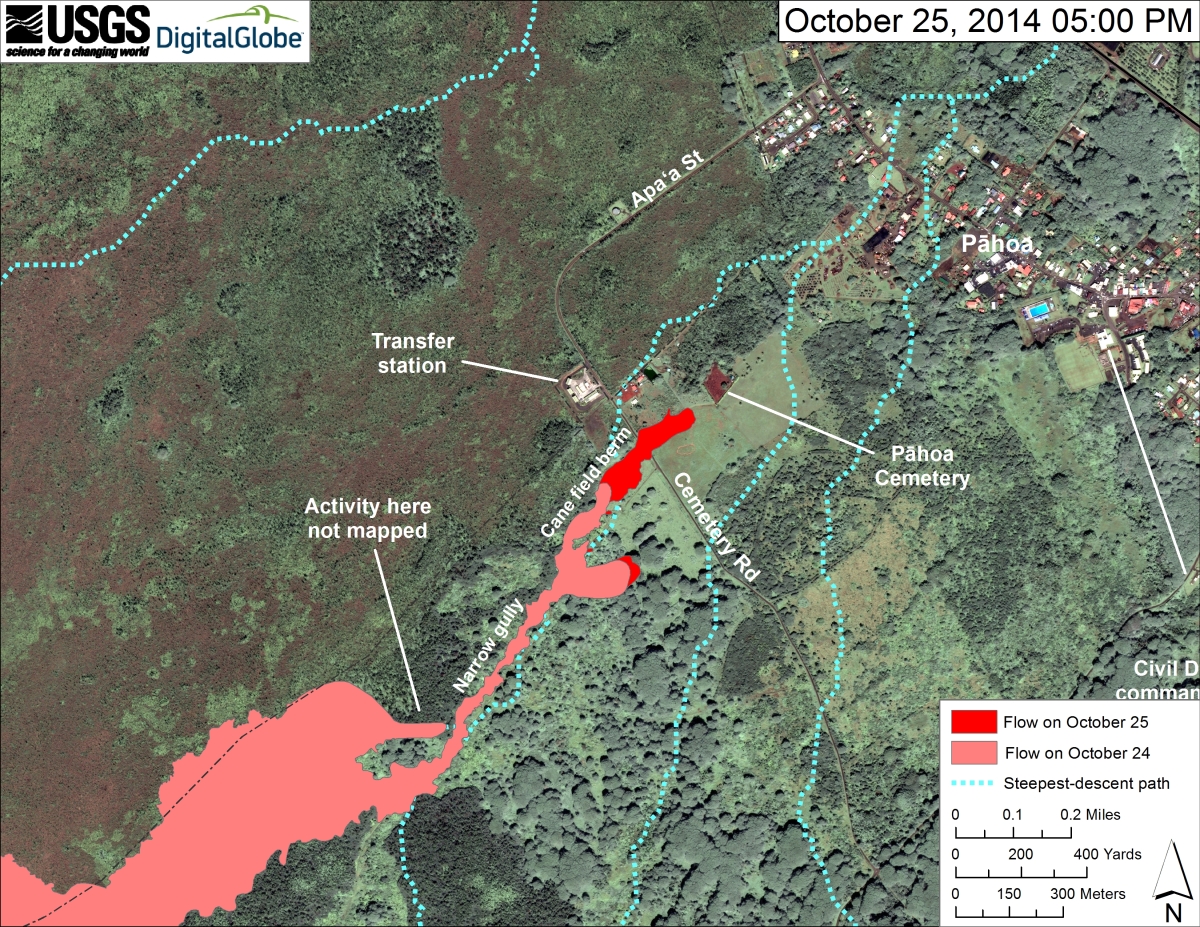 This USGS HVO map uses a satellite image acquired in March 2014 (provided by Digital Globe) as a base to show the area around the front of the June 27th lava flow. The area of the flow on October 24, 2014, at 12:10 PM is shown in pink, while widening and advancement of the flow as mapped on October 25 at 5:00 PM is shown in red. The dotted blue lines show the pertinent steepest-descent paths, calculated from a 1983 digital elevation model (DEM).
The flow advanced about 315 m (345 yd) during the past 29 hours, crossing Apaʻa Street/Cemetery Road at about 3:50 AM this morning, and was about 80 m (260 ft) from the Pāhoa Cemetery at 5 PM. The flow was deflected away from the steepest-descent line it had been generally following, and toward the cemetery, by an old man-made cane-field berm just above Apaʻa Street. The flow is advancing downslope between two intersecting steepest-descent paths and will likely return to the original steepest-descent path about 300 m (330 yd) upslope from Pāhoa Village Road, if it continues. 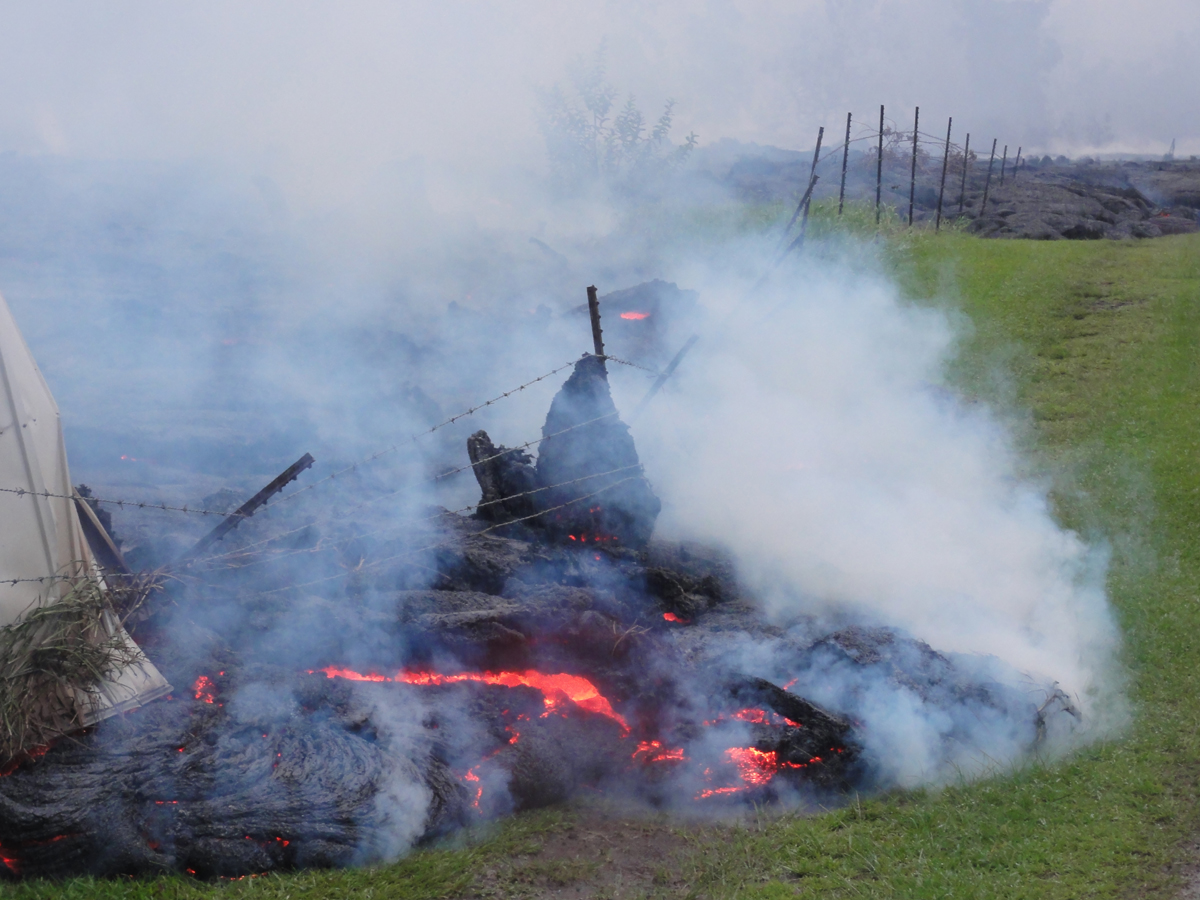 USGS says some of the flow front had the appearance of “slabby” pāhoehoe, which is the type of pāhoehoe in which the surface consists of numerous broken, overturned slabs. One of the rotated surface slabs presses against the fencing that runs along the small road to the cemetery.