(ABOVE PHOTO) This USGS Hawaiian Volcano Observatory photo, which was taken at about 9 a.m. Saturday, shows the flow – which crossed Apa’a Street at 3:50 a.m. – moving from right to left. Burning asphalt is visible along it’s northwest margin. A utility pole, far right, was surrounded by lava but remained standing at the time of the photo. The hope is that the protective insulation and cinder/cement barrier around the pole will prevent it from burning through.

The flow continues to remain active and has advanced approximately 70 yards since 6:30 this morning. The flow front crossed Apa’a Street at approximately 3:50am this morning and continues to advance in a northeast direction towards the cemetery. The flow is currently moving at approximately 10 yards per hour. Smoke from the burning asphalt is not affecting area communities at this time however residents are advised that conditions could change with the varying winds.

Civil Defense, HELCO, and Community Emergency response Team personnel are conducting door to door notifications of residents in the down slope areas of Pahoa Village to insure residents are aware of current activities. Based on the current flow location, direction and advancement, residents in the flow path will be placed on an evacuation notice.

Apa’a Street and Cemetery Road will remain closed between the Pahoa Transfer Station and the Kaohe Homesteads Road. In addition, Civil Defense and public safety personnel will be operating in the area round the clock to maintain close observations of flow activity.

Additional updates will be broadcasted as conditions change.Hawaii County Civil Defense on Oct. 25 at 2 p.m. HST

The June 27th flow remains active and has moved downslope at a higher rate in the past few days (240 m, or 260 yd, per day). The flow front crossed Apa‘a Street at approximately 3:50 AM, HST, Saturday morning, October 25, 2014, and is continuing to advance downslope along the path of steepest descent towards the central part of Pāhoa town. As of 1:00 PM on Saturday, the flow was approximately 115 m (125 yd) downslope (NW) of Apa‘a Street and moving down the driveway to the Pāhoa cemetery, 1 km (0.6 mi) from Pāhoa Village Road and 1.6 km (1 mi) from Highway 130.

Pāhoa town is in the Puna District of the County of Hawai‘i.

Recent Observations:
[Lava flow] The June 27th lava flow has advanced rapidly during the past several days, averaging 240 m/day (260 yd/day) during the past 2 days. The flow crossed Apa‘a Street at 3:50 AM Saturday morning, October 25, and has followed the steepest descent path as it has moved downslope. The rapid advance is likely caused by the combination of a slight increase in the lava eruption rate, a concentration of activity at the distal end of the flow (no breakouts were observed upslope of the flow front during an overflight on October 24), and the influence of small-scale topography that has caused the flow to narrow considerably (less than 100 m, or 110 yd, wide). As shown by the varying advance rates of the past several weeks, the flow’s future advance rate is likely to continue fluctuating, making it difficult to forecast arrival times at particular sites. However, as long as the June 27th flow keeps advancing, it is projected to continue following the path of steepest descent through Pāhoa town, towards Pāhoa Village Road and Highway 130.

Hazard Analysis:
[Lava flow] The June 27th lava flow from the Pu‘u ‘Ō‘ō vent is active and advancing toward Pāhoa town, having crossed the first road (Apa‘a St./Cemetery Rd.) above the town early on the morning of October 25. The flow could impact other infrastructure within days (depending on the actual advance rate of the flow, which fluctuates over time).

Remarks: The Pu‘u ‘Ō‘ō vent in the East Rift Zone of Kīlauea Volcano began erupting on January 3, 1983, and has continued erupting for more than 31 years, with the majority of lava flows advancing to the south. Over the past two years, lava flows have issued from the vent toward the northeast. The June 27th flow is the most recent of these flows. On June 27, 2014, new vents opened on the northeast flank of the Pu‘u ‘Ō‘ō cone and fed a narrow lava flow to the east-northeast. By late October the flow had reached over 21 km (13 mi) in length after advancing over the previous 4 months to the NE at an irregular rate, up to 400 m (440 yd) per day on some days and not at all on others. The flow crossed a road above Pāhoa town on the morning of October 25, at which time it was 1 km (0.6 mi) upslope of Pāhoa Village Road. USGS Hawaiian Volcano Observatory on Oct. 25, 2014 at 1:40 p.m. HST 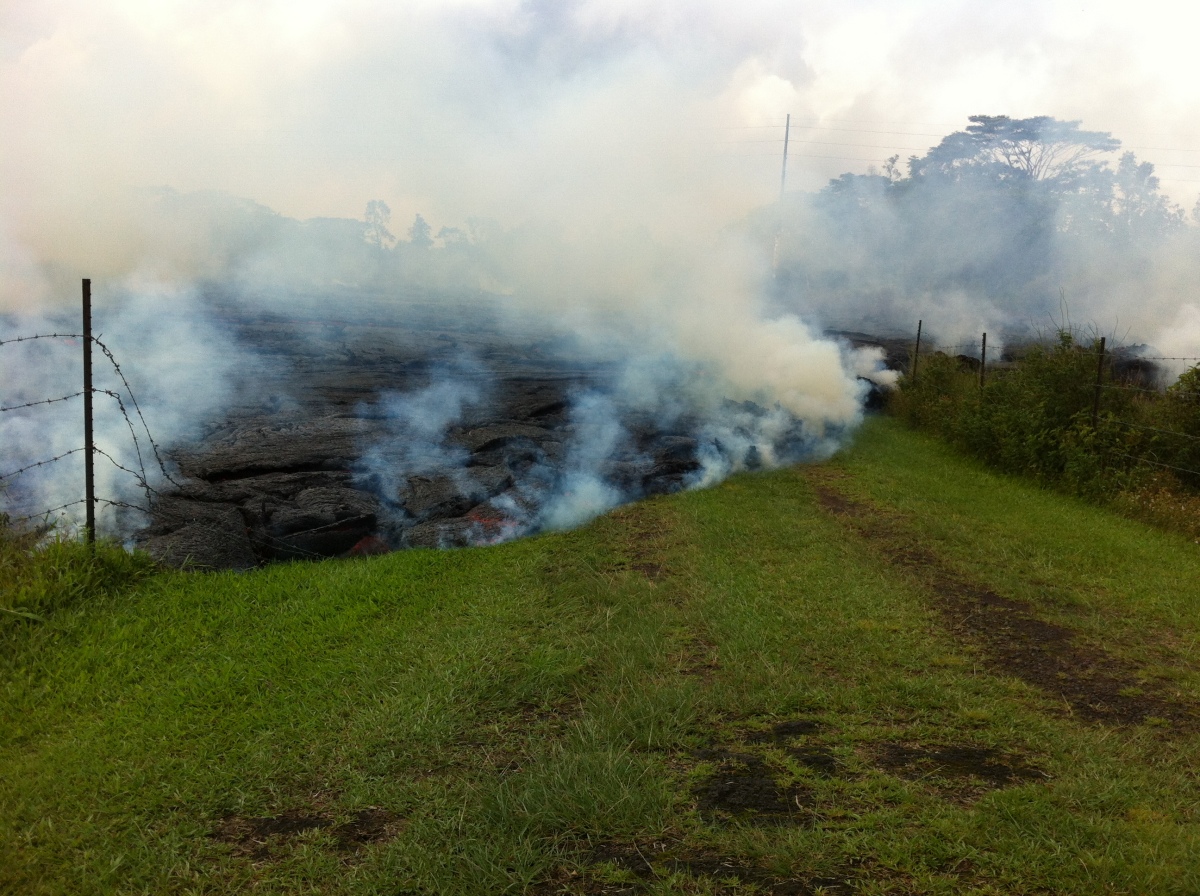 At 11 a.m. Saturday, USGS HVO captured the flow advancing down the grassy driveway that leads to the Pāhoa cemetery. This view is looking upslope towards Apaʻa Street along the cemetery driveway.

Hawai‘i Electric Light reports that its power poles along Apa‘a Street currently remain in place as the lava flow crossed the road earlier this morning. There are no outages at this time.

“We are encouraged by the initial result of the pole protection design, but the long term results are still not determined,” said spokeswoman Rhea Lee. “We will continue to closely monitor the flow and its effect on our infrastructure. As the lava flow progresses, we expect the lava will rise and inflate. This is the second test of our experimental design.”HELCO Oct. 25, 2014