The flow front is about 330 yards past Apa'a Street in Pahoa, and has crossed all the way through the cemetery.

(ABOVE PHOTO) This photo was taken by the USGS Hawaiian Volcano Observatory on October 26. “As of 10 a.m. HST,” wrote HVO, “the June 27th flow front remains active and continues to advance towards the northeast. A portion of the front is still moving through the open field (shown here), while the leading tip of the flow has advanced through the Pāhoa cemetery.”

Oliveira said the lava-inundated cemetery was an active, Buddhist cemetery. The local temple associated with the cemetery held a ceremony for the burial ground in anticipation of the lava flow. Oliveira said it was “very saddening to see the flow cross over and take out the gravesites.”

Below is a lengthy portion of today’s 11:30 a.m. HST media conference call with scientists from the USGS Hawaiian Volcano Observatory and Hawaii County officials.

HVO scientists monitored the leading portions of the June 27th flow on the ground yesterday. The narrow lobe that had been moving rapidly downslope reached Apaʻa St/Cemetery Rd near the driveway to the Pāhoa cemetery at 03:20 yesterday morning and finished crossing it at 03:50.

As of yesterday afternoon, this flow is the only area of the flow front that is advancing downslope. The rate of advance was varying between 10 and 15 m/hr (11-16 yd/hr) yesterday. The front moved 140 m (150 yd) from 5pm yesterday to 9am this morning, a rate of 9 m/hr. There appears to be an area of slightly steeper slope just below the cemetery and higher advance rates are possible if the flow reaches that point. The flow front was about 40 m (45 yd) wide at 5pm Saturday, but spread out in the relatively flat terrain near the cemetery and is roughly estimated to be (150 yd) wide presently.

The flow was deflected away from the steepest-descent line it had been generally following, and toward the cemetery, by an old man-made cane-field berm just above Apaʻa Street. The flow is now advancing downslope between two intersecting steepest-descent paths and will likely return to the original steepest-descent path about 300 m (330 yd) upslope from Pāhoa Village Rd (see map ).

Scientists are currently monitoring the flow front and will issue a status update this afternoon. USGS Hawaiian Volcano Observatory on Oct. 26 at 9:32 a.m. HST 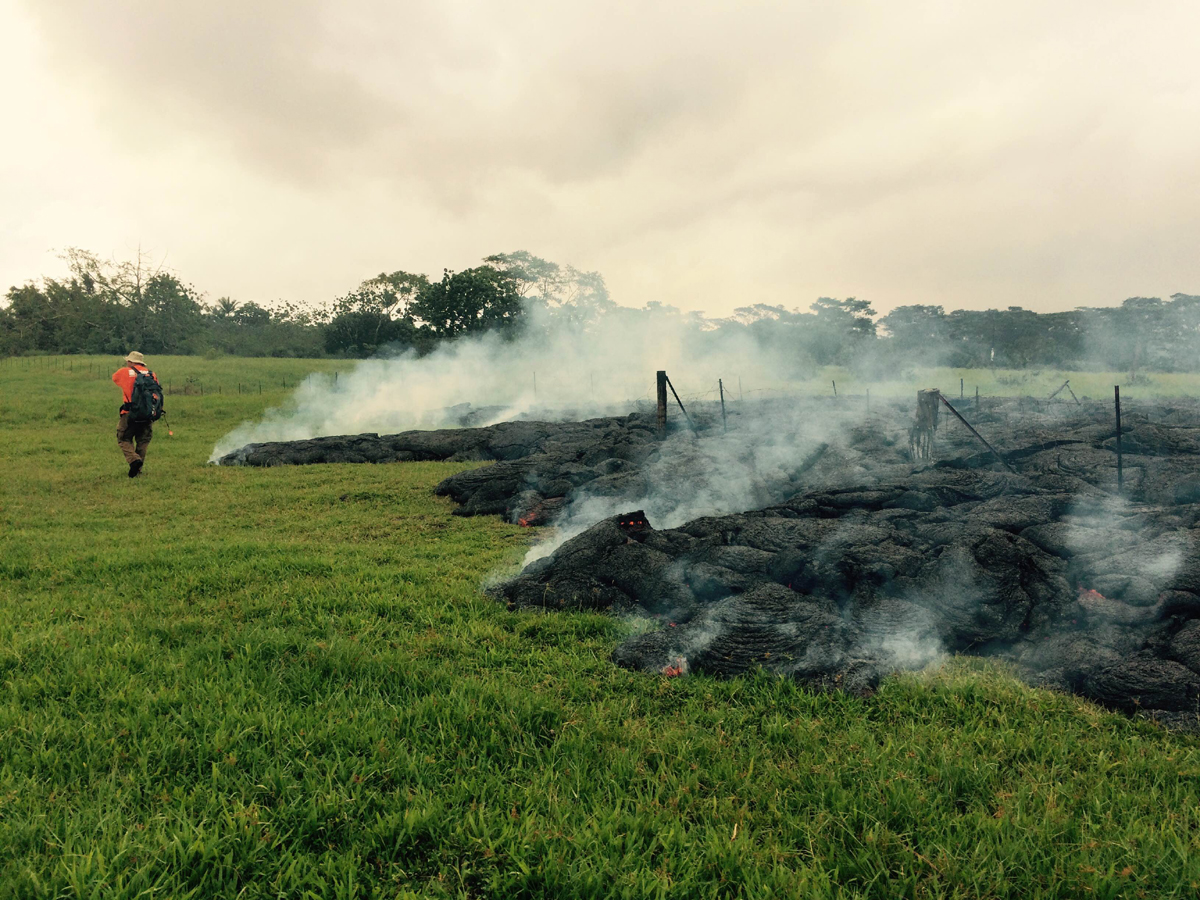 An HVO geologist maps the margin of the June 27th lava flow in the open field below Apaʻa Street / Cemetery Road. This photo is courtesy USGS HVO.