The lava is 160 yards from Pāhoa Village Road, and the Hawaii National Guard has been deployed.

(ABOVE PHOTO) Lava creeps along on private property in Pahoa, courtesy Hawaii County

Smoke conditions continue to be moderate with moderate trade winds from the northeast pushing the smoke in a south southwest direction. Presently burning activity is involving a variety of materials and smoke conditions may increase in some areas. Residents down wind that may be sensitive or have respiratory problems are advised to take necessary precautions and to remain indoors. Additional health advisories may be issued depending upon materials involved with any fires associated with the lava flow.

The Pahoa Village Road between Apa’a Street and the Post Office Road will remain closed and limited to area residents only. Motorist should use caution and slow down on Highway 130 near the Post Office Road intersection. Residents of the restricted area should not bring unauthorized persons into the restricted area. In addition, Civil Defense and public safety personnel will be operating in the area round the clock to maintain close observations of flow activity. Additional updates will be broadcasted as conditions change.Hawaii County Civil Defense on Oct. 30 at 8 a.m. HST 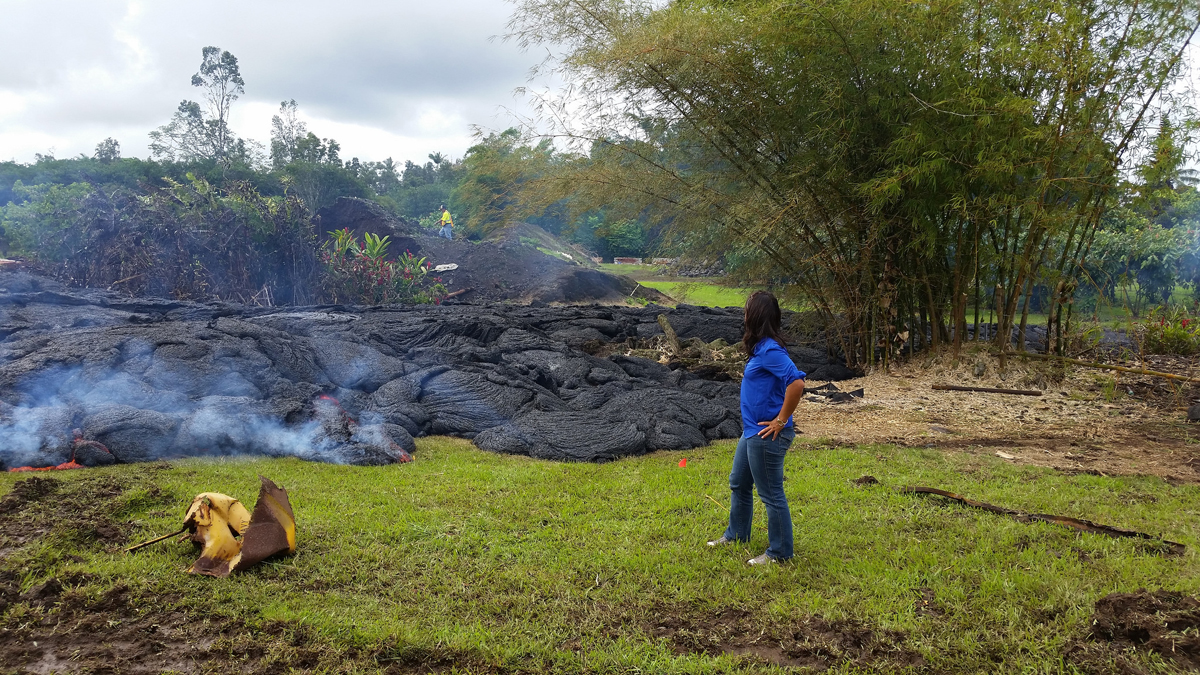 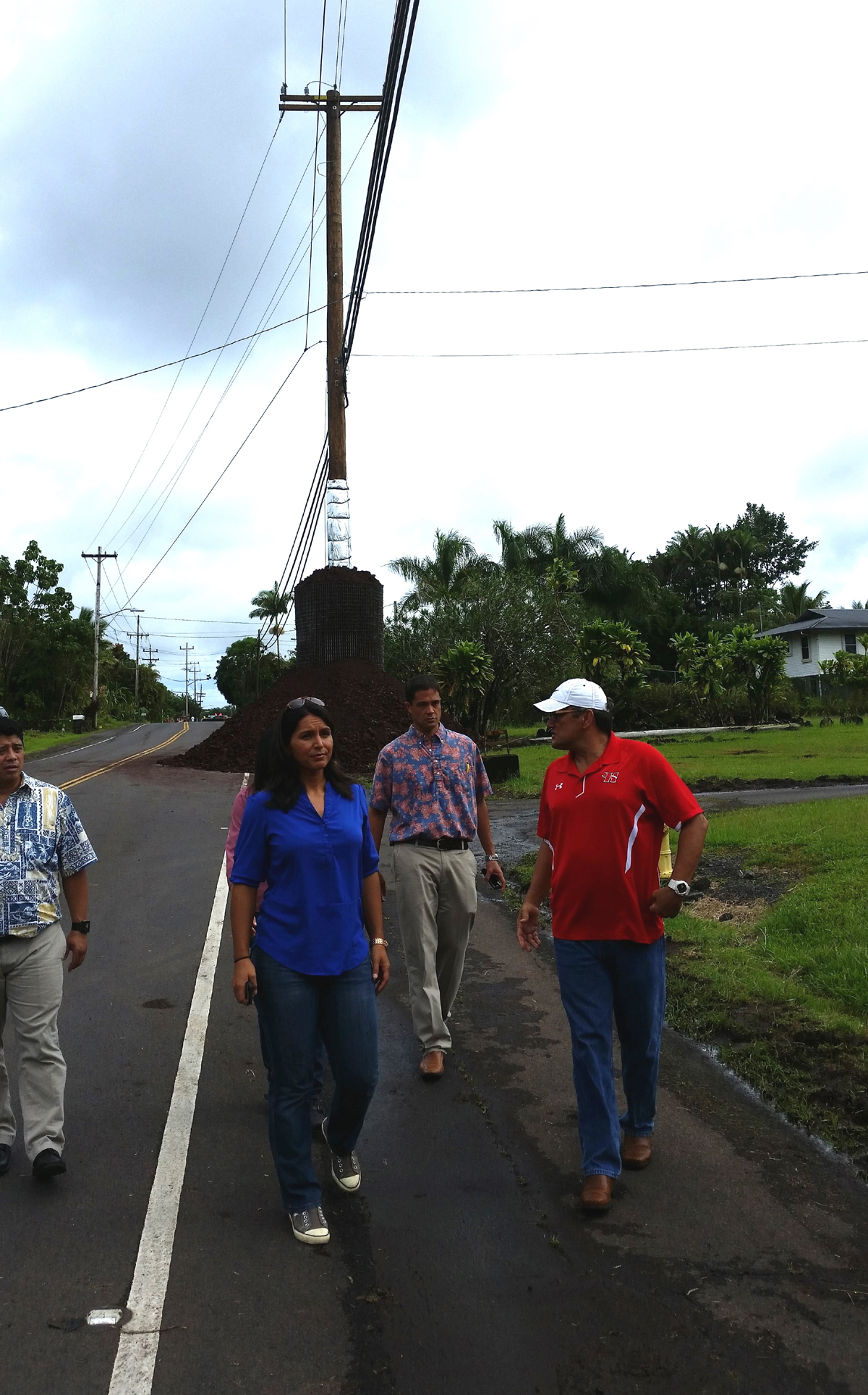 Kīlauea continues to erupt at its summit and within its East Rift Zone. Gas emissions have remained elevated. The June 27th lava flow in the East Rift Zone continues to advance, at variable rates, to the northeast through a residential area between Apaʻa St/Cemetery Rd and Pāhoa Village Road. As of 5:30 am this morning, the leading edge of the flow had advanced a distance of roughly 100 m (~110 yards) through the past 24 hours, with the flow remaining roughly 150 m (~167 yards) from Pahoa Village Road. Behind the flow front, there continue to be active breakouts widening the area of lava flow coverage.

June 27th Lava Flow Observations: HVO scientists monitored the leading portions of the June 27th flow on the ground throughout the day and night. In addition, an HVO team observed the flow field via helicopter. The most rapidly advancing lobe of the flow continues to advance northeast towards Pāhoa Village Road, through the first residential parcel it entered.

The lava flow lobe on the Kalapana side was about 60 m (~66 yards) upslope from Cemetery Road but was only weakly active based on FLIR views (small breakouts on interior of the lobe, margins inactive).
Several small breakouts from the tube were noted, in areas several kilometers above the flow front where there have not been active breakouts in several weeks.

Puʻu ʻŌʻō Observations: Small changes in ground tilt were recorded at Puʻu ʻŌʻō during the past day. Seismic tremor remained steady. Glow was visible overnight above several outgassing openings in the crater floor, but there were no significant changes in activity within the crater. The most recent sulfur-dioxide emission-rate measurement for the East Rift Zone was 340 tonnes per day (from all sources) on October 23, 2014.

Summit Observations: The Halemaʻumaʻu lava lake level fluctuated during the course of the past day, with one notable but small burst at the base of the wall opposite the webcam that temporarily affected the entire lake surface. The depth to the surface of the lake was measured as about 60 m from the floor of Halemaʻumaʻu crater, and there was no significant net change through the day. At mid-day, October 29, summit tiltmeters registered the onset of a deflationary trend plausibly heralding the onset of another deflationary-inflationary (DI) event. This deflation continues and apparently associated deflation has registered on the Puʻu ʻŌʻō instruments. The GPS receivers in the summit area have recorded slight contraction across the caldera since early July. The most recent sulfur-dioxide emission rate measurements for the summit were 2,700–3,600 tonnes/day (see caveat below) for the week ending October 21, 2014. USGS Hawaiian Volcano Observatory on Oct. 30 at 9:35 a.m. HST 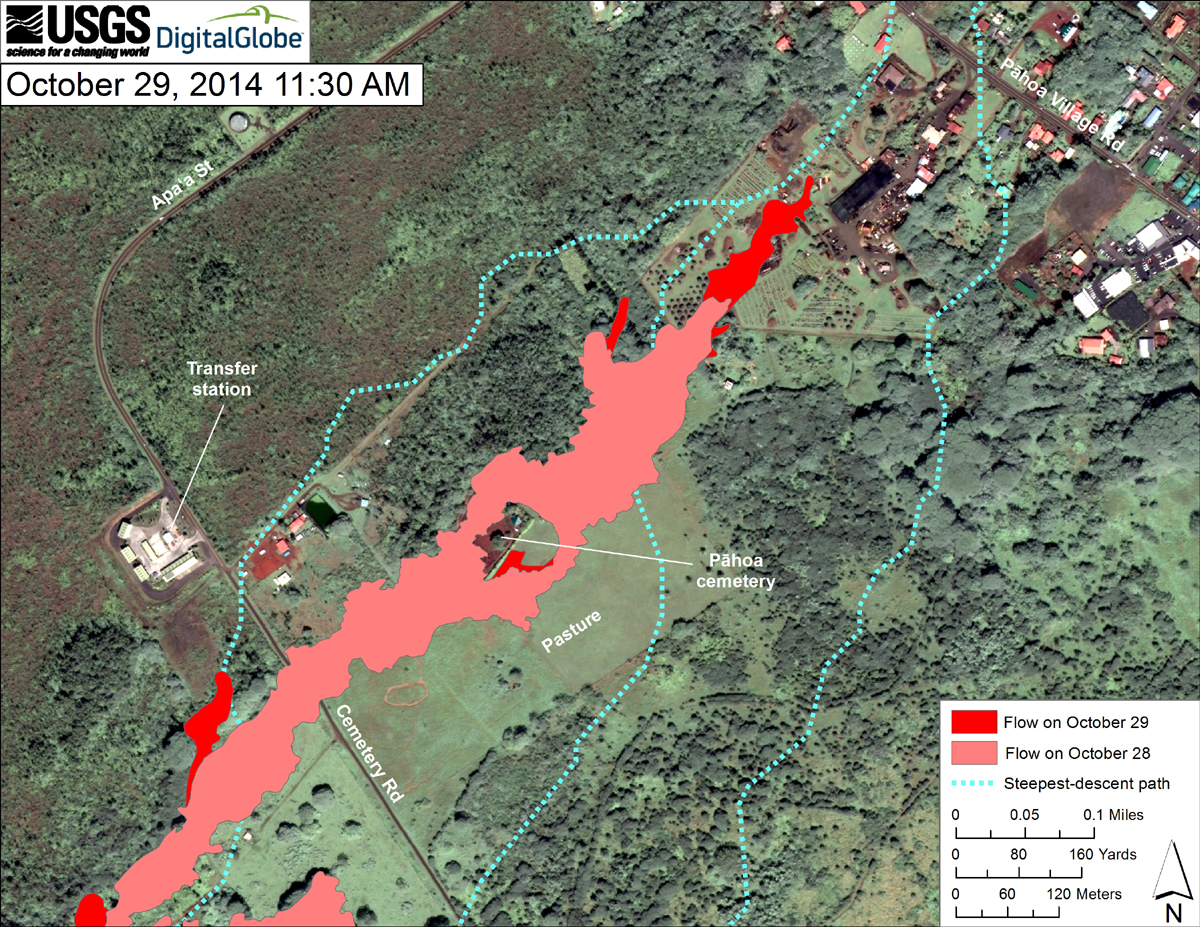 USGS HVO: This map uses a satellite image acquired in March 2014 (provided by Digital Globe) as a base to show the area around the front of the June 27th lava flow. The area of the flow on October 28, 2014, at 1:00 PM is shown in pink, while widening and advancement of the flow as mapped on October 29 at 11:30 AM is shown in red. The dotted blue lines show steepest-descent paths in the area, calculated from a 1983 digital elevation model (DEM).
The flow advanced about 170 meters (185 yards) during the preceding 22.5 hours, traveling through private property. The flow was 215 meters (235 yd) upslope from Pāhoa Village Road at the time of mapping. A crudely mapped finger was also active just outside the same private property along the north side of the flow.
Flow inflation over the past several days has lifted the flow surface higher than the old cane field berm just upslope from Apaʻa Street. Two new breakouts from along the north edge of the flow started yesterday and overtopped the berm. Though not large, the more vigorous of the two breakouts was following the previously projected steepest-descent path that passes just east of the transfer station.