The lava flow remains active however the front has not advanced since yesterday and remains 480 feet from Pāhoa Village Road.

(ABOVE PHOTO) This USGS Hawaiian Volcano Observatory photo shows lava from the lobe that was active in the forest below the Pāhoa cemetery overcoming a fence marking private property late on Friday afternoon.

This morning’s assessment shows that the flow front remains active however has not advanced since yesterday. All activity along the front has been limited to breakouts along the margins or sides of the flow as well as on the flow surface. The front remains approximately 480 feet from the Pahoa Village Road. Additional breakouts upslope of the flow front are being monitored and those breakouts currently do not present with an immediate threat to area residents.

Smoke conditions were light to moderate with moderate trade winds from the northeast pushing the smoke in a south southwest direction. Smoke conditions may increase in some areas and residents down wind that may be sensitive or have respiratory problems are advised to take necessary precautions and to remain indoors.

The Pahoa Village Road between Apa’a Street and the Post Office Road will remain closed and limited to area residents only. Motorist should use caution and slow down on Highway 130 near the Post Office Road intersection. Residents of the restricted area should not bring unauthorized persons into the restricted area. In addition, Civil Defense and public safety personnel will be operating in the area round the clock to maintain close observations of flow activity. Additional updates will be broadcasted as conditions change.Hawaii County Civil Defense on Oct. 31 at 8 a.m. HST

Scientists of the USGS Hawaiian Volcano Observatory conducted aerial and ground observations of the June 27th lava flow on Friday, October 31, 2014. As of 5:45 PM, HST, the leading edge of the flow had not advanced, although there were several small breakouts oozing from the flow behind the leading edge. The breakout in the forested area just downslope of the Pāhoa cemetery advanced by over 140 meters (153 yards) over the past 24 hours. By 5:45 PM it had breached a fence line marking private property.

No changes were noted at Puʻu ʻŌʻō compared to previous overflights. The cross sectional area of the lava tube measured Friday was 1.9 square meters (2.3 square yards), which is less than that measured last week and implies a decrease in the amount of lava flowing through the tube. This observation is consistent with the deflated state of the summit due to the ongoing DI event (DI deflation is often associated with a decrease in the eruption rate of lava from Puʻu ʻŌʻō). A small inflection in summit tilt may indicate the onset of summit inflation at around 4:15 PM, but it is difficult to assess the change without additional data. USGS Hawaiian Volcano Observatory on Oct. 31 at 6 p.m. HST 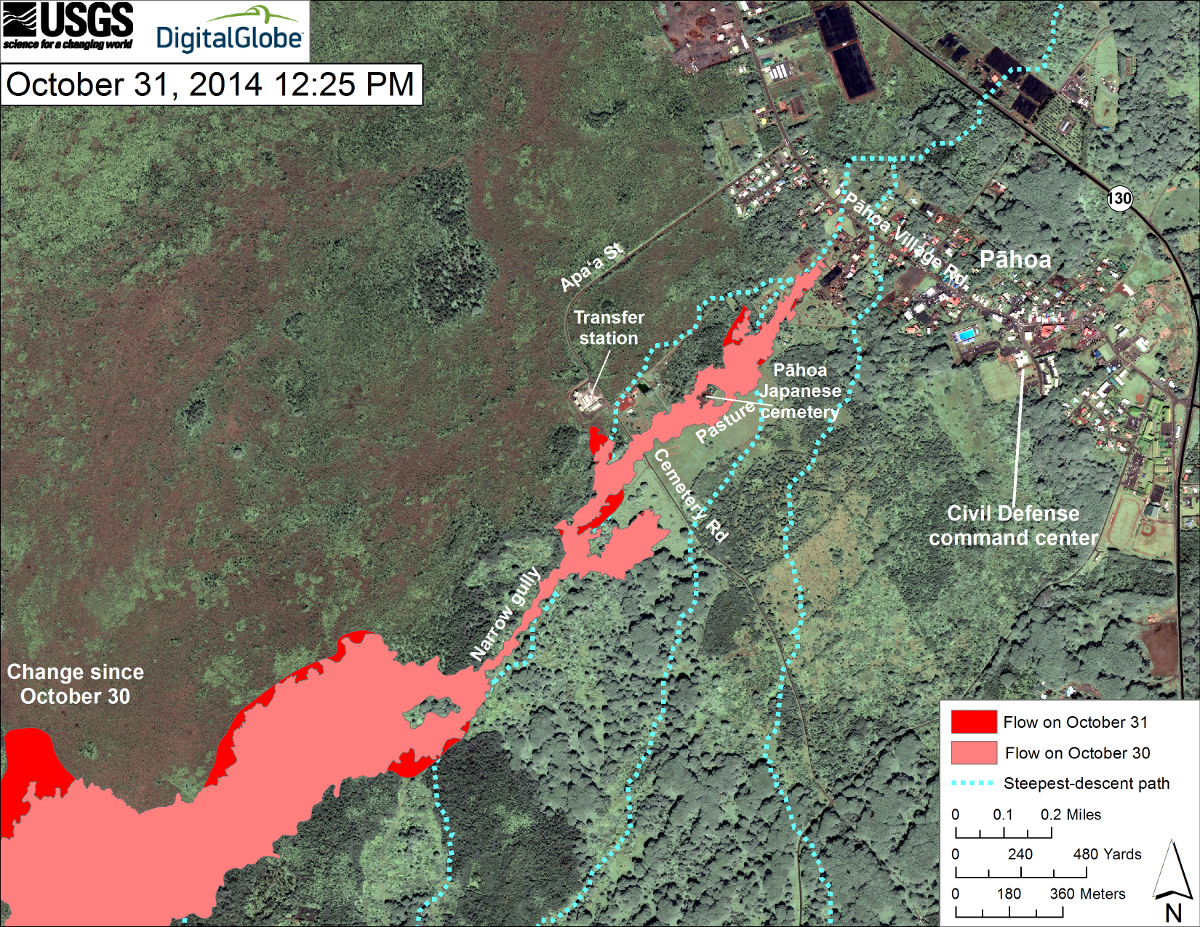