Active breakouts were present within 11 yards of the stalled lava flow front on Sunday.

(ABOVE VIDEO) Sunday morning’s Hawaii County Civil Defense message with lava video filmed Sunday on the ground by Hawaii County, and in the air by Mick Kalber of Tropical Visions Video aboard Paradise Helicopters. (UPLOADING)

The Kilauea volcano summit experienced subtle inflation throughout Sunday, probably related to the waning stages of the most recent DI (deflation-inflation) event. The stalling of the flow front on Thursday seemed to coincide with the deflation stage of the DI event. Now that inflation has occurred, scientists and emergency officials are waiting to see if there will be increased activity on the flow field. USGS scientists say it usually takes a few days for the effects of summit DI events to be observed downrift, if there are any at all. Flying with Paradise Helicopters above the lava on Sunday, volcano videographer Mick Kalber said he observed “considerably more lava activity both in Pahoa and upslope”, filming numerous surface flows “including a very vigorous one in the orchard approximately 350 yards from Pahoa Village Road, and another progressing through the trees within 50 yards of a home.”

Scientists of the USGS Hawaiian Volcano Observatory conducted ground observations of the June 27th lava flow throughout the day on Sunday, November 2, 2014. The leading edge of the flow has not advanced since Thursday, but active breakouts of lava were present within 10 meters (11 yards) of the stalled front and for several hundred meters (yards) upslope.

Overall, the distal portion of the June 27th lava flow showed weak to moderate activity, with scattered sluggish breakouts emanating from various places on the inflated flow. The lobe near the Pāhoa transfer station did not advance today, and the lobe in the pasture below the Pāhoa cemetery extended the flow margins slightly.

The summit experienced subtle inflation throughout Sunday, probably related to the waning stages of the most recent DI event. USGS Hawaiian Volcano Observatory on Nov. 2 at 5:42 p.m. 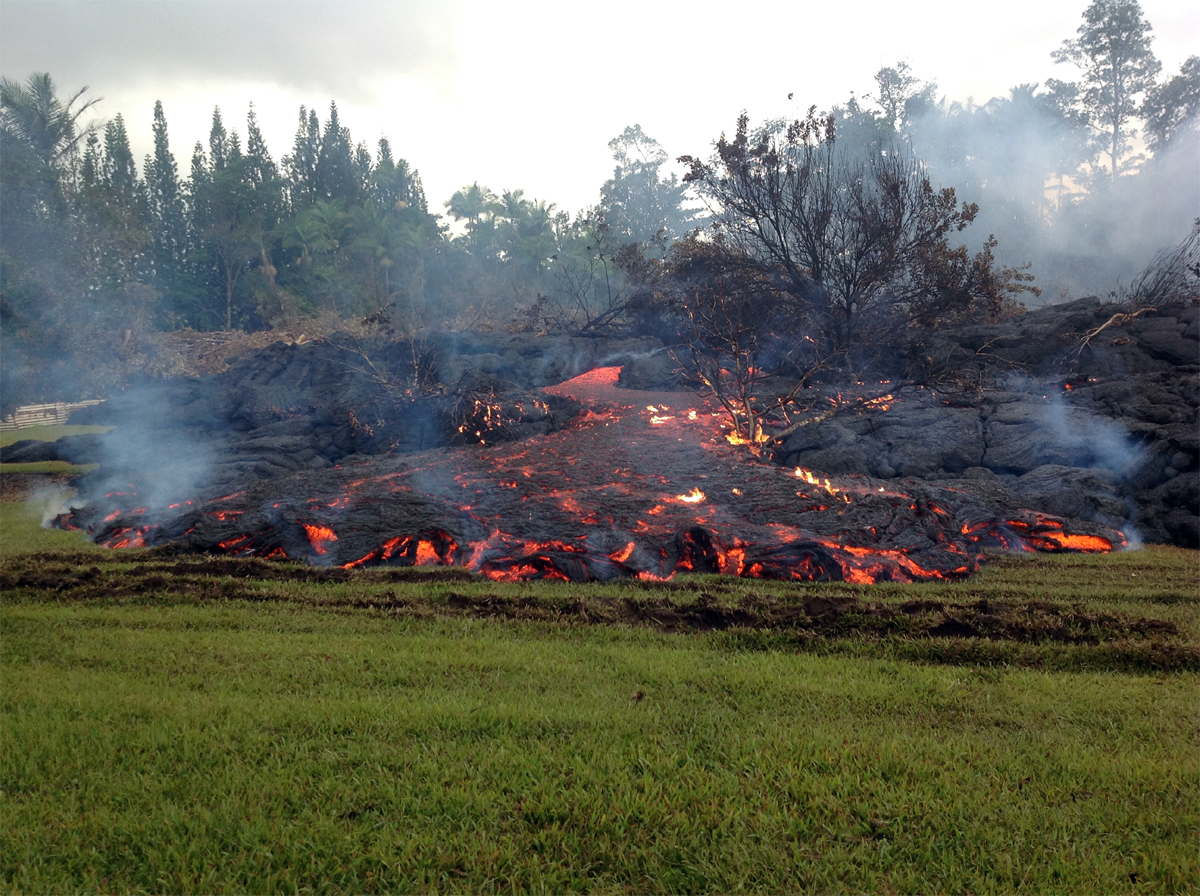 USGS HVO says scattered breakouts like this, which took place about 200 meters (218 yards) upslope of the stalled leading edge, have been common over the past few days and are filling in low points behind the flow front.

The Office of Hawaiian Affairs announced today that it will be providing evacuation aid to Native Hawaiians who live in the path of a lava flow edging closer to their homes in the Puna area.

OHA’s Board of Trustees approved $300,000 in relief aid to help up to 600 households that may be forced to evacuate the area in the coming days as lava from Kilauea volcano draws near their homes.

Native Hawaiian families that are forced to evacuate will be eligible for one-time aid of $500 per household from OHA, which is making the assistance available until June 30, 2015.

To qualify, their primary residence must be located within a mandatory evacuation zone designated by Hawai‘i County. Also, permanent residents must be Native Hawaiian; however, applications will be accepted from anyone in a household who is a parent or legal guardian of Native Hawaiian children under age 18

Forms that will be accepted as proof or verification of Hawaiian ancestry include a birth certificate and an OHA Hawaiian Registry Card. To prove residency, an eligible household would have to provide any two of the following documents: a utility bill; mortgage statement; rental agreement; rent receipt (with address); letter from landlord; bank statement; car registration; 2013 tax return; or voter registration form.