The leading edge of the flow remains stalled and the overall level of activity was low. Meanwhile police are asking the public to be alert.

This morning’s assessment shows that the flow front remains stalled with very little activity and has not advanced over the past five days. The flow pad continues to show signs of inflation which could result in breakouts and more activity. The front remains approximately 480 feet from the Pahoa Village Road. The upslope breakouts remain approximately 0.7 to 1.50 miles above the Apa’a Street area and along the north side of the flow and moving in a north/northeast direction.

Smoke conditions are light with light trade winds. Smoke conditions may increase in some areas and residents down wind that may be sensitive or have respiratory problems are advised to take necessary precautions and to remain indoors.

We would like to thank everyone for your patience and understanding and your cooperation and assistance is greatly appreciated.Hawaii County Civil Defense on Nov. 5 at 7:30 a.m. HST 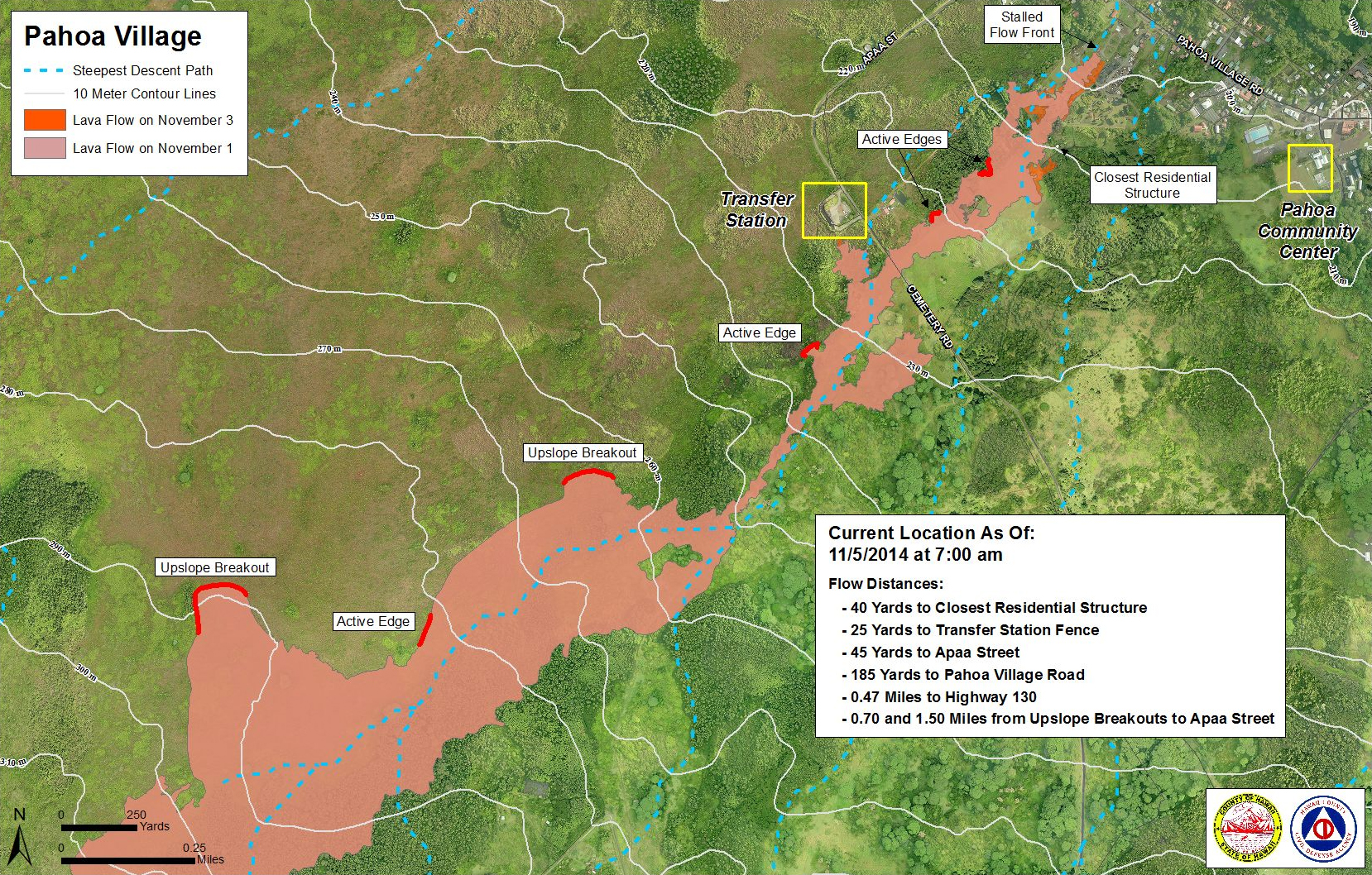 Kīlauea volcano continued to erupt at its summit and within its East Rift Zone, and gas emissions remained elevated. As of Wednesday morning, the leading edge of the June 27th lava flow had not advanced beyond where it stalled late last week, in a residential area approximately 155 meters (170 yards) above Pāhoa Village Road. Activity continued behind the lava flow’s leading edge, within the flow’s interior, and along its side margins, with localized breakouts of molten lava. As reported by Hawaii County Civil Defense, active lava lobes persisted ~1 to 2.5 km (0.7 to 1.5 miles) upslope of Apaʻa Street, and along the north side of the flow there, advancing in a north-northeast direction. Only very minor tilt occurred at Kīlauea’s summit, and the level of the summit lava lake at Halemaʻumaʻu Crater dropped by 5 m (5 yards) from the previous day.

June 27th Lava Flow Observations: HVO scientists continued monitoring the progress of the lava flow on Tuesday. The leading edge of the flow remains stalled and the overall level of activity was low. However, active breakouts persist in areas upslope of the leading edge and from lobes along the flow margins, and the interior of the flow continues to inflate. The most active breakout on Tuesday, Nov 4, was ~1 km (0.7 miles) above Apaʻa Street, on the north side of the flow, over a margin of about 400 m (440 yards). Other, smaller, breakouts were observed near the Pāhoa Cemetery, a few hundred meters upslope of the transfer station, and just east of Kaohe Homesteads on the south side of the flow. A County Civil Defense overflight on Wednesday morning noted activity at the breakout ~1 km (0.7 miles) above Apaʻa Street, and another ~2.5 km (1.5 miles) above Apaʻa Street, both moving in a north/northeast direction. An HVO overflight is planned for Wednesday to further assess any changes.

Puʻu ʻŌʻō Observations: At ~1330h on Tuesday, Nov 4, a small lava pond in the south pit in Puʻu ʻŌʻō’s crater overflowed into the central part of the crater. Two additional overflows occurred early Wednesday morning. During an overflight, HVO scientists observed fresh shiny lava from this overflow, and small spatter cones with incandescent openings were seen in the southeast pit and the northeast pit (consistent with previous observations). Seismic tremor continued at low and relatively steady amplitudes, and no earthquakes were located in the vicinity of the cone. The most recent sulfur-dioxide emission-rate measurement for the East Rift Zone was 320 tonnes per day (from all sources) on October 31, 2014. The tiltmeter nearest Puʻu ʻŌʻō is believed to be malfunctioning, but the GPS-measured distance across the cone remains unchanged.

Summit Observations: No significant tilt occurred at Kīlauea’s summit. Four small earthquakes were located beneath the summit, and volcanic tremor persists at low amplitudes which show episodic fluctuation. On Tuesday, Nov 4 at ~1720h, the level of the lava lake in the Overlook vent was measured to be 62 m below the vent rim, about 5 m (5 yards) lower than the previous day. Consistent with these observations, web cams show minor fluctuations in lava lake level. Small amounts of particulate material have been carried aloft by the plume. Sulfur-dioxide emission rate measurements for the summit ranged from 4,250 up to 7,000 tonnes/day (see caveat below) through the week-long period ending October 28, 2014. USGS Hawaiian Volcano Observatory on Nov. 5 at 8:57 a.m. HST

Hawaiʻi Island police are asking the public to be alert to any suspicious activities, particularly in the Puna District, which is under an emergency declaration because of an active lava flow. Area residents are advised to call 9-1-1 to report any suspicious persons or vehicles.

The public is reminded that the classifications of certain crimes are elevated while the emergency declaration is en effect.

On September 4, Mayor Billy Kenoi proclaimed a state of emergency for the Puna District under Act 111 of the 2014 Hawaiʻi State Legislature.Hawaii County Police Dept. media release on Nov. 5