(ABOVE PHOTO) This Nov. 11 USGS Hawaiian Volcano Observatory photo shows how the lava flow above Apa’a Street has inflated up to the level of the Pāhoa transfer station fence. A glowing crack provides evidence of the flow’s molten interior.

This morning’s assessment shows that the three breakouts remain active and continue to advance These breakouts are located in the area of the cemetery below Apa’a Street; above Apa’a Street in the area west or upslope of the transfer station; and .3 miles upslope of Apa’a Street. The breakouts currently do not pose an immediate threat to area residents and will be monitored closely. The breakout near the transfer station has entered the facility rear driveway area and burning is involving the asphalt road material. All other burning with other breakouts is limited to vegetation only.

Smoke conditions are currently moderate to heavy with light trade winds blowing the smoke in a south southwest direction towards the Leilani and lower Puna areas. Smoke conditions may increase in some areas and residents down wind that may be sensitive or have respiratory problems are advised to take necessary precautions and to remain indoors.
The evacuation advisory for those residents down slope of the flow will continue and residents will be kept informed of the flow status and advancement.

The Pahoa Village Road between Apa’a Street and the Post Office Road will remain closed and limited to area residents only. Access to the businesses and commercial areas of the Pahoa town can be made through the Pahoa Village Road at the intersection of Highways 130 and 132. We apologize for any inconvenience the road closure may be presenting with.

Additional updates will be broadcasted as conditions change.Hawaii County Civil Defense on Nov. 12 at 8 a.m. HST 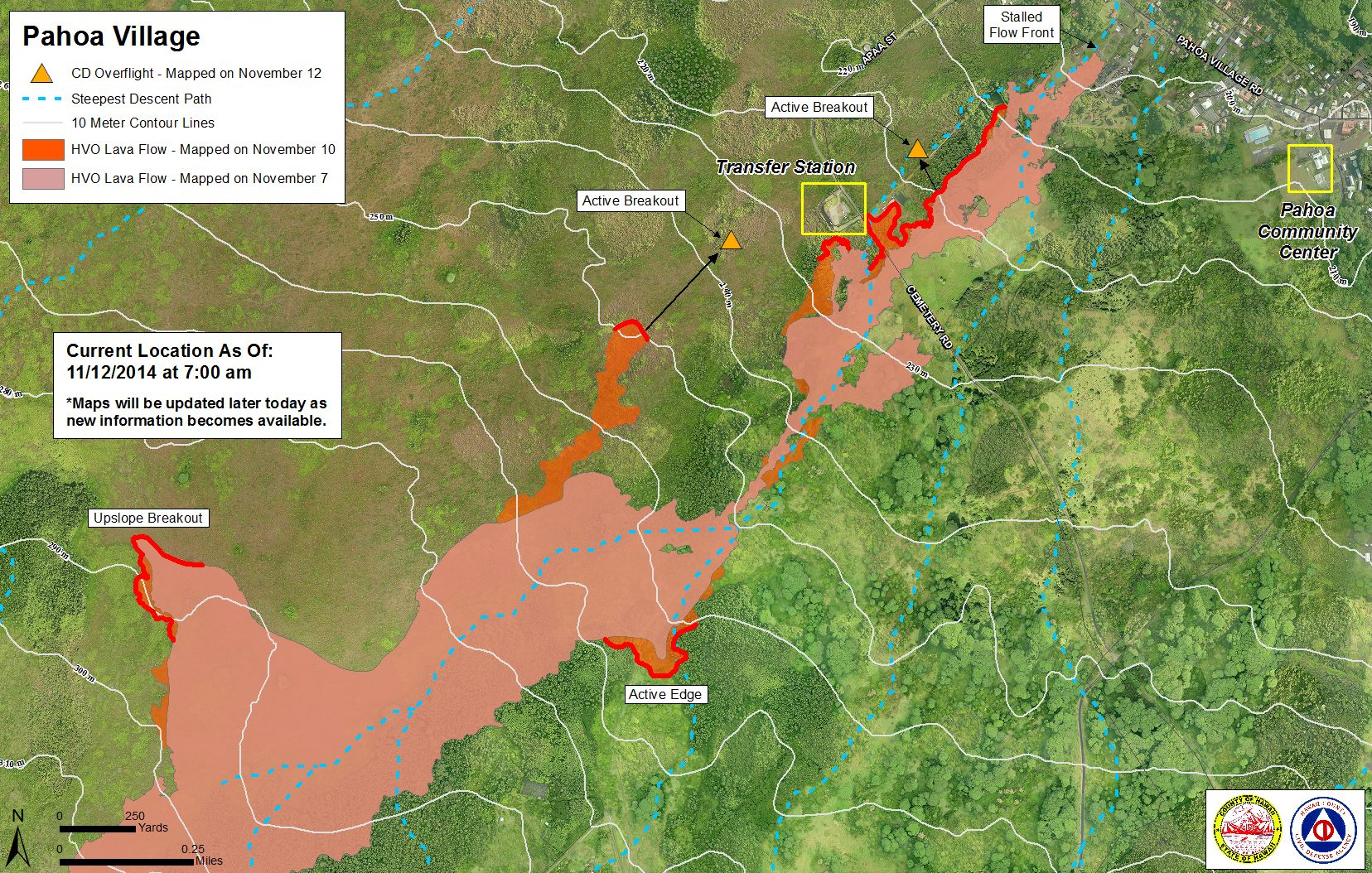 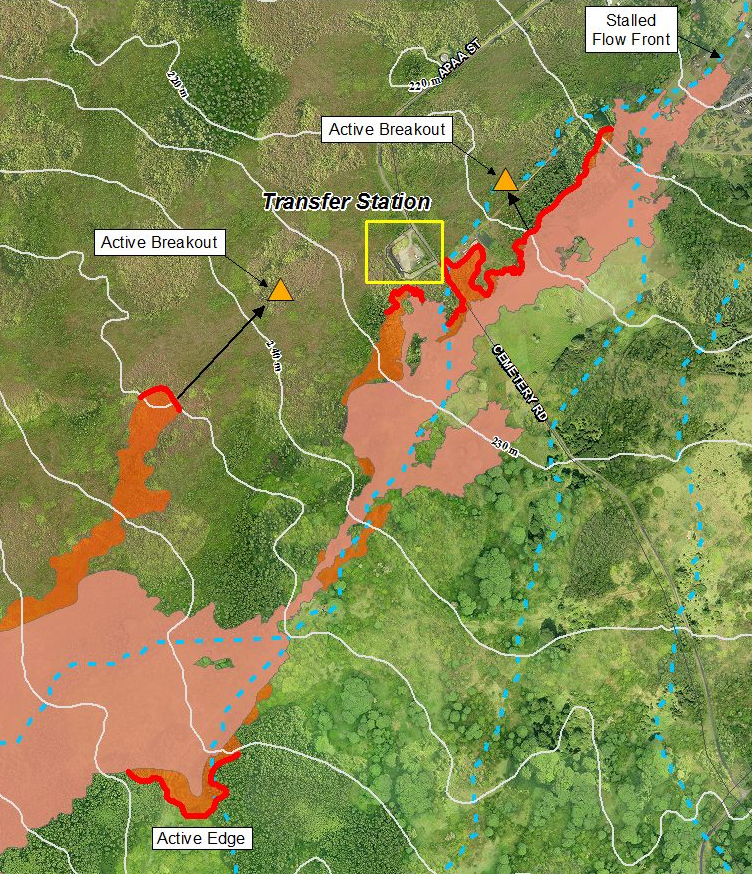 Kīlauea volcano continues to erupt at its summit and within its East Rift Zone. The leading edge of the June 27th lava flow has not advanced beyond where it stalled on October 30. HVO scientists conducted a helicopter overflight this morning and observed localized breakouts of lava in scattered locations upslope of the stalled leading flow edge. Breakouts near Apaʻa Street were active at the transfer station. Other breakouts were active further upslope, one of which was located on the north side of the main flow above Apaʻa Street and southwest of the transfer station. Deflationary tilt began at Kīlauea’s summit around midnight, and the surface of the summit lava lake at Halemaʻumaʻu Crater dropped slightly.

June 27th Lava Flow Observations: HVO scientists conducted a helicopter overflight this morning to assess the progress of the lava flow. The leading edge of the flow had not advanced beyond where it stalled on October 30, in a residential area approximately 155 meters (170 yards) above Pāhoa Village Road, but breakout activity continued in areas upslope of the leading edge. The closest active lava to Pāhoa Village Road was located several hundred meters upslope of the road, below the Pāhoa cemetery. Near Apaʻa Street, lava entered the transfer station fence over the past day, and this morning lava was continuing to fill the low area surrounding the center of the transfer station. Lava was also active on private property on the northeast side of the street. Other breakouts were active up to 2.7 km (1.7 miles) upslope of Apaʻa Street. A portion of this upslope activity was focused in a narrow lobe whose leading edge was several hundred meters above Apaʻa Street on the north side of the flow, and southwest of the transfer station (see map link).

Puʻu ʻŌʻō Observations: No significant changes were noted near Puʻu ʻŌʻō. Seismic tremor continued with relatively steady amplitude, and webcams revealed no strong variations in the pattern of glow from degassing vents nor the configuration of the crater floor. Recently HVO scientists have observed small incandescent openings in the north, northeast, south, and southeast pits in Puʻu ʻŌʻō’s crater. The tiltmeter at Puʻu ʻŌʻō showed little change, although following its recent repair the data from this instrument cannot yet be considered completely reliable. The GPS-measured length across the cone has not changed significantly since July. Fourteen small earthquakes were located beneath Kīlauea’s upper East Rift Zone in the past day. The most recent measurement of sulfur dioxide emissions from the East Rift Zone was 320 tonnes per day on October 31, 2014.

Summit Observations: Inflationary summit tilt continued through Tuesday but switched to deflationary tilt early Wednesday, after midnight. The surface height of the lava lake in the Overlook vent fluctuated over the past day, dropping slightly due to spattering this morning. Several small earthquakes were located beneath the summit, and volcanic tremor persisted with a fluctuating amplitude. Small amounts of particulate material were carried aloft by the plume. Summit emissions of sulfur dioxide ranged from 3,400 to 6,400 tonnes/day (see caveat below) through the week-long period ending November 4, 2014. USGS Hawaiian Volcano Observatory on Nov. 12 at 8:57 a.m. HST